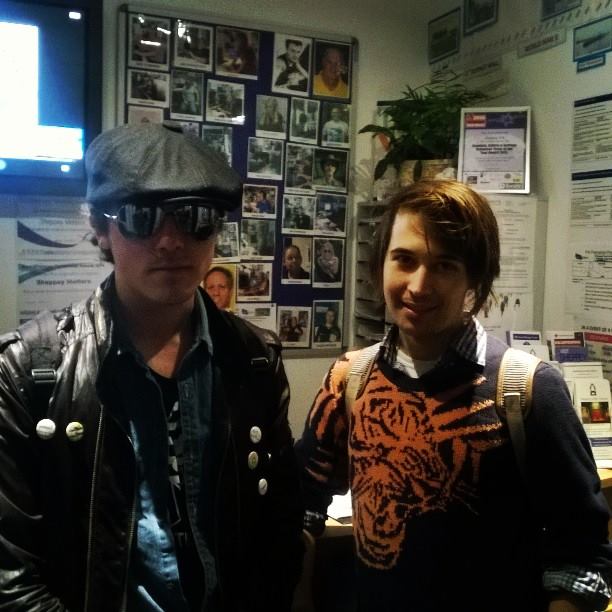 Next year will mark the 60th anniversary of the very first meeting of Britain’s most famous musical act ever, John Lennon and Paul McCartney. The best known half of The Beatles first clapped eyes upon each other in the summer of 1957, when Lennon invited McCartney to join his first band, The Quarrymen.

So with that in mind, it’s apt that a new musical duo is picking up the mantle of the “modern day Lennon and McCartney” as we head into 2017. Get ready for a nostalgia-fuelled trip back to the good old days of 1960s soft rock with the wonderful tones of Eastbourne-based duo Robert Wilson and Lachlan Campbell – together known as Ultimate Lifeforms.

Ultimate Lifeform are simply unlike anything else you’ll hear in the big old musical world. They conjure up images of The Beatles, the glam era of David Bowie and classic rock sounds of the likes of T-Rex, with exceptionally produced, wonderfully written pop-rock.

Like their more famous compatriots, Ultimate Lifeform have displayed an impressive knack for prolific writing – knocking together some 150 songs in their four years working as a duo. Not only that, between them the pair play in excess of an impressive 30 instruments.

We spoke to Wilson, who handles most of the vocals, drums, guitar and more, to discover more about this eclectic duo and discovered that, like many of the best musicians out there, a bit of friendly rivalry is key to their success.

Wilson told us: “It started as a side project at uni, we’d known each other for a long while and were both focusing on our own records – even recording in studios next to each other – and the inevitable happened. I just dropped in one day to see what he was working on, there was a great rivalry between us. I’d keep an ear out for his tracks because I felt not just the songs themselves but the production work was stunning. So when he asked me to lay down some drums on his stuff it just went from there, I was very privileged.”

Wilson and Lachlan have a real passion for making great music and getting that music heard. They describe their sound as “catchy glam rock,” which perhaps doesn’t quite do it justice. They certainly have the Lennon/McCartney ability to write a fun, catchy song about everyday normal things. For example, Wake-Up Dream / 40ft Woman Rap sees Wilson sing “I wash my hair, I shave my face” alongside a whole host of simple yet addictive hooks.

The Beatles sound is really strong on upcoming album This Star Is Home – which will be released in January but the band kindly gave us an early listen to. Indeed, Wilson goes as far as admitting the album is based on the Liverpool legends, with big production songs and some hippy-infused tracks thrown in for good measure.

They possibly save the best until last with the wonderfully produced final track on the album, Unicorn Grace – which Wilson claims was the band’s attempt to ‘go one further’ than tracks like Hey Jude and All You Need Is Love. Take a listen and judge for yourself, but there’s a definite ‘big Beatles sound’ there.

Wilson explained: “I write about life in general. A song should always be like a diary, a snapshot of where you’re at. Like with this new album, a few songs on there really mean something. The first single Not Her Bag was about a girl I knew who drank Lady Grey Tea and had a 4-string guitar and would stay in on a Friday night. You can get inspiration everywhere and I think everyone has one great song in them. An old friend of mine told me you have to write 100 songs before you write your first classic, so I must be halfway to my second classic.”

My current favourite track from the album is the delicious Nosebleed Season. Wilson’s approachable vocals meander through the verses, followed by an upbeat chorus supported by a cool horn accompaniment, which takes the lead for a funky musical breakdown after the second chorus.

But there’s also real flexibility in their music, as next song on the album Rainshaker is like a cross between The Vines and Oasis, with heavily distorted guitars and big drums supporting a distinctly Gallagher-esque drawl of vocals, followed by a drawn-out guitar interlude. That’s followed by the much lower tempo track Moon Friendly, which gradually builds on you, while the first single from the album Not Her Bag features flowing piano licks and laid back saxophone solos.

Wilson said:”I think it’s a mix of wanting to make classic records and songs with huge melodies, not being afraid of pop. A lot of bands at the moment on the music scene, not naming anyone, are focusing really on making noise on stage, with their guitars up to 11 and all that. For us it’s about using things you don’t really get on records these days, the horn arrangements on this album and a lot of Hammond Organ – I want people to think ‘ooh look out, that’s different.’

“You need to get out of the way of the music, it sounds cheesy but the song has to form naturally. We do a project which I’d reccomend to any songwriter, young or old, once a year. We try and write and record a whole album in 12 hours, you really can’t stay too long on a lyric that isn’t quite working or a melody that’s a bit crap. You just keep pushing forward throwing ideas away like ‘oh that doesn’t work.’ It means you trim the fat off everything and focus on the obvious simple melody. Just keep writing and appreciate every song you write, they’re all your babies.”

Given their close affiliation to The Beatles, who had huge success in a musical era completely alien to that which we now inhabit, it seemed apt to ask Wilson what he made of the state of the current musical scene.

He said: “The industry is entirely different to perhaps ten years ago, entirely different. X-Factor aside, it was always going to change. I don’t mind Simon Cowell because he isn’t going out claiming to make these arty records, he knows his audience and puts out a product aimed at them. Gigs and small bands are really struggling for a number of reasons, but there is great music out there. I think a lot of girl groups, girls really are paving the way forward in music at the moment. I think if people support live music things can survive.”

There’s something really refreshing and unique about Ultimate Lifeform, particularly the sound of This Star Is Home. Take a listen, close your eyes and you’ll be absolutely convinced you’ve stepped into a musical time machine and gone back six decades. The songwriting is sublime, it’s immaculately produced and the musical arrangement is hugely enjoyable.

Now, would you believe this is the first time we’ve ever referenced The Beatles in an article, after nearly three months of writing about new rock bands? Go figure.

Stay in touch with Ultimate Lifeform on Facebook and check out their music on Soundcloud and Bandcamp.

The pair will also be releasing a Christmas EP, which is due out in early December with all funds going to the James Bulger Memorial Trust, so stay tuned for more information on that Yuletide treat.