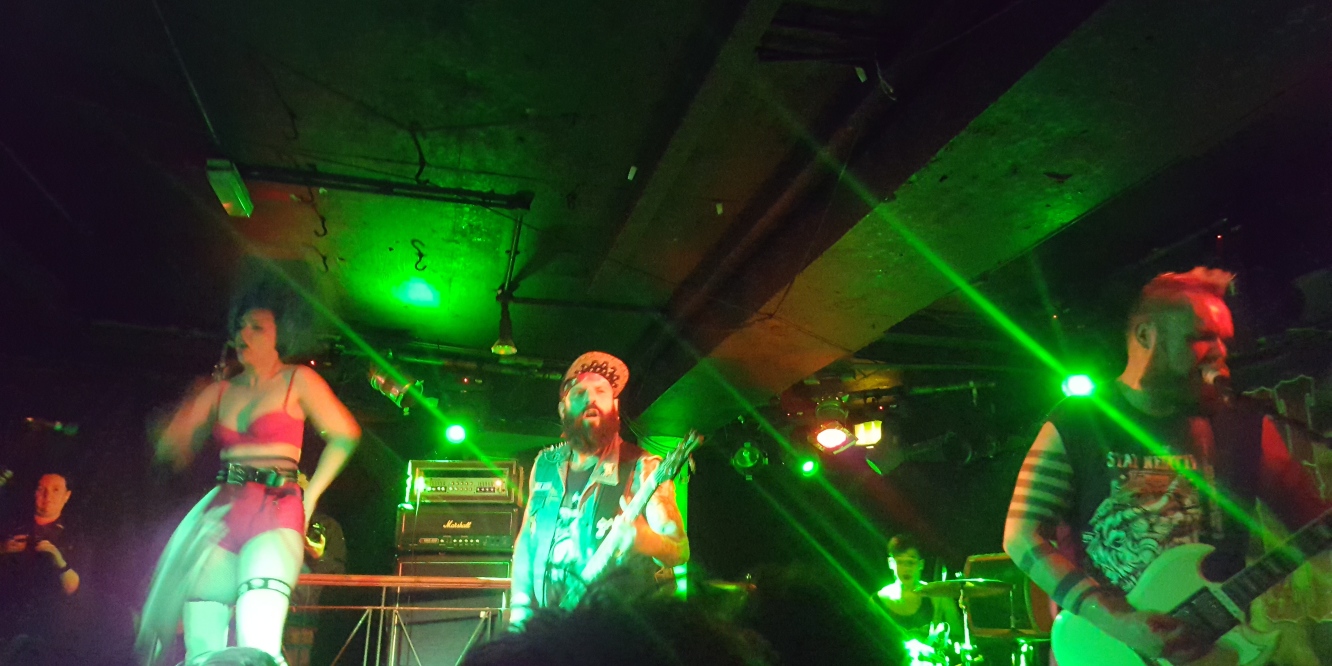 On a day that will be remembered in history for all the wrong reasons, three female-fronted rock bands from across the globe gave Londoners an evening to remember for all the right reasons.

The venue was already beginning to fill up when Derby-based Eva Plays Dead, who were our first ever interview on this site back in October, made their presence known on stage with lead singer Tiggy Dee’s huge vocals. A low tempo intro soon gave way to some big vocals, followed by a huge scream that led into a big rocky chorus and cool “oh-oh” vocals. It was an impressive introduction to the audience, which was followed up by an equally big second track.

Tiggy then told the crowd to put their hands in the air and clap, shouting “fuck the terrorists, fuck the haters” before launching into the excellent Wonderland, followed by Get Back, which is almost rap-like in its vocal delivery then kicks into some good heavy rock featuring the awesome lyrics “I’m a little fucked up yeah, I’m a little drugged up yeah.”

They then launched into new single Live Again, but not before Tiggy shouted: “Fuck you to all the fucking terrorist bullshit, let’s have a good time tonight.” Amen to that. Ahead of the next track Tiggy revealed she’d been in hospital that morning with concussion and been advised ‘not to move her head,’ so she promptly launched into most recent single Bones and threw her head all over the place. Let’s hope her head is alright this morning!

Eva Plays Dead rounded off their set with Monogamy, at the end of which drummer Seb Boyse moved his equipment into the crowd and promptly began drumming his heart out while the rest of the band brought the set to an end on stage. Nice to see a drummer getting the limelight!

Next up Toronto’s Sumo Cyco, who are on the verge of releasing brilliant second album Opus Mar next Fridy (31 March) and which we’ll have more on very soon, appeared to grand background music and lead singer Sever wearing what appeared to be a pilots’ jacket and hat.

They launched straight into the awesome Sumo Cyco sound, and second track Anti-Anthem, the opening song from the new album, had the place bouncing – it sounded absolutely huge live, with Sever throwing in some big screams for good measure. This led straight into Sleep Tight, one of the standout tracks among a host of brilliant songs on the new album, with its big guitar riffs and awesomely addictive, singalong chorus – making it a superb, bouncy live track.

Sumo Cyco put together a great set combining tracks from both their debut album and teasing us with tracks from the new album. Older tracks like Go Go Go, My Name is Rock’n’Roll and Crowd Control (Do What We Wanna) were simply huge and the crowd singing along and jumping around, while there was an equally good reception for new songs like the addictive Move Mountains (which features Skindred’s Benji Webbe on the album) and the brilliant Free Yourself.

They went out in style with the excellent Fighter, which saw guitarist carry Sever into the crowd and played out the final chorus in amongst us.

This was one of the best sets I’ve ever seen, Sumo Cyco are superb live, with huge energy, they’re massively entertaining and generally amazing fun. They’re one of the most exciting, interesting and talented bands around and I’d fully encourage you to get out there and see them live, support them and get your hands on their new album when it’s out. Keep your eyes peeled for a review and interview with Sever on this, very shortly.

Sumo Cyco’s set meant the bar was placed ridiculously high for co-headliners Devilskin but I was mightily impressed. They entered in dramatic style, blasting the crowd with some form of electric steam gun, and the incredible, crazily good voice of Jennie Skulander ensured the music was even more dramatic. Their live show was stunningly powerful – plus the matching bald heads and dyed long beards of bassist Paul Martin and guitarist Nail is visually pleasing.

Skulander’s vocals were dominant from the off, particularly on brilliant second track In Black, the opening track from November’s release Be Like The River. That was followed by the huge Start A Revolution, with Skulander emitting blood-curdlingly massive screams and hitting huge high notes – with the live version much heavier than the recorded one.

Next up House 13 kicked off sounding very Metallica-esque with big guitar riffs and driving drums leading into Skulander’s ridiculously powerful vocals – the big, strong high notes in the chorus have to be heard to be believed. 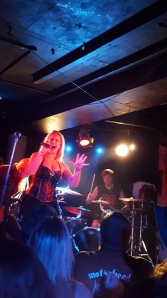 Devilskin continued blasting out huge tune after huge tune, including an epic cover version of Heart’s Barracuda, in which Skulander sunk to her knees as she emitted the lyrics “Down down down on my knees, Barracuda.”

Another highlight was the excellent and brutal Until You Bleed, in which Skulander superbly combines big screamed vocals with awesome singalong passages, which led onto a big extended guitar solo.

Last night’s show is up there with the best gigs I’ve ever been to, and it showcased three very different, but superb female-fronted bands. You can see them for yourselves as the UK tour continues with four more dates in the next four evenings, starting at Rock City in Nottingham tonight, then Milton Keynes, Southampton and Bournemouth. Find more info on those dates here.