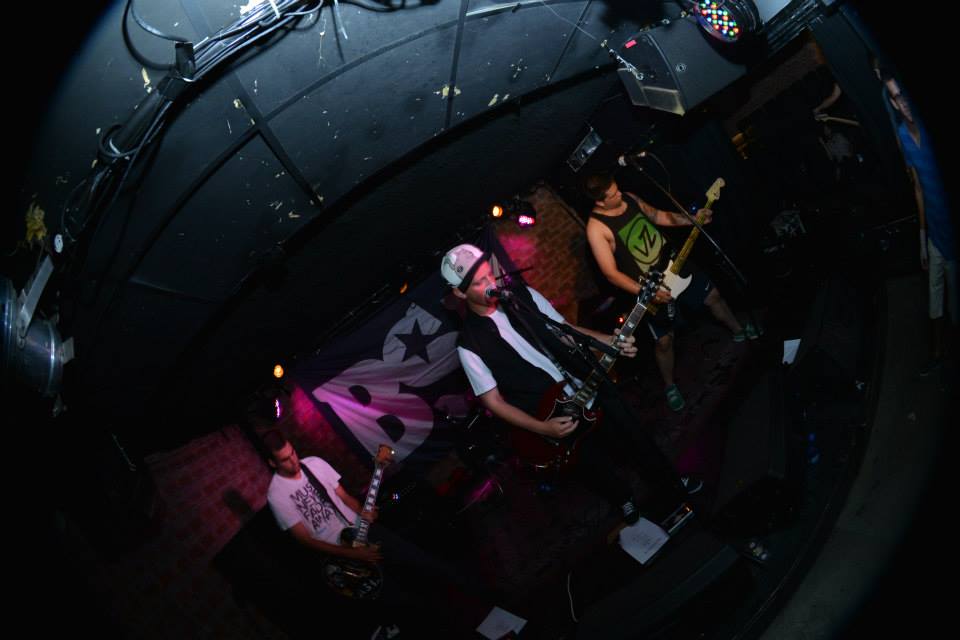 Post-hardcore rockers Jack The Envious have one of the more interesting background stories we’ve heard of, with the three founding members having formed the band during their military service back in their homeland of Israel.

Jack The Envious started life as vocalist Nir Perlman and guitarist Guy Avnon back in 2011, adding bassist Guy Checkarov in 2012 and then James MacPherson on drums, and moved to London this January.

As Nir tells us: “We came to the UK in the sole purpose of following our dreams to make it as a band, basically leaving our friends and family behind so we could focus on this crazy journey – so if anyone wants to be a part of our adventure you are more than welcome!”

The band has honed an engaging sound that fuses post-hardcore with the energetic feeling of punk rock, and almost emo-like delivery. So we think you’ll absolutely want to join them on that journey. The result has been the release of excellent debut nine-track EP Pull You Down last year, which they are set to follow up with new EP In Your Own Way in July.

On the new EP Nir says: “We’re as excited as an artist can get when releasing something new to the big world. We wanted to capture the change we’ve gone through in the past year, yet give the listeners who already know us that familiar JTE vibe. You can definitely hear similarities to every aspect of our first EP in the new material, so you can expect diversity and lot of energy.”

The first release from that EP is new single Begging For More, which is chocked full of the energy Nir alludes to. It opens up with a funky little guitar riff before launching into a big high-pitched blast of guitar and drums. Nir’s engaging vocals come in for a verse that’s full of suspense with heavy drums and minimal guitar support, and soon flies into a big energy, ridiculously catchy chorus that ends with the lyrics: “On the way down singing, woah” which you can imagine being huge in a live set. The second chorus is followed by a huge scream and big blast of guitar that brings the high-energy track to a fitting end.

Check it out in the video below:

As mentioned, the band – named after one of the band member’s dogs called Jack, who got so jealous of his newborn sister that he bit her and they had to get rid of him – met during military service, which Nir explains was challenging at times: “We all served three years around the same time period, the three of us went to be combat soldiers and Nir and Chuck actually met during commanders’ course.

“That was around the time the band started, and it wasn’t easy mixing both army duties and a new band. There have been times where we played a show on a weekend night and one of us had to take the night bus to get back to base. It wasn’t easy but we made it work, because when you care about something in life, you always find a way to make it work.”

Based on Begging For More, Jack The Envious’ new EP is set to be a worthy follow-up to their debut – which itself is superb, with huge tracks like More To Life, which you can also check out in the video below.

We asked Nir to sum up the JTE sound and what influences their music, and he told us: “Old but new. Basically because a lot of times we get comparisons to older bands we grew up on like Sum 41, Linkin Park, My Chemical Romance etc… but we definitely bring our own new thing to the table! It sounds like something all the cool kids probably listen to…

“We can get influenced by the simplest melody, riff, drum part, or just from constantly listening to music. Our writing is on our everyday experiences, things we go through, or have gone through. Each song is a new experience about something else. We also try and keep it abstract so that a reader could take it and make it his own personal experience.”

Jack The Envious is a really exciting, hugely energetic new band and we’re loving what we’ve heard from them so far and looking forward to hearing more soon. The band plans to tour as much as possible on the back of In Your Own Way, which is out on 14 July, and has plenty of new material coming our way.

3 Replies to “New Band of the Week: Jack The Envious”