On Saturday night we went along to see our New Band of the Week from last month Jack The Envious rock Surya, in Kings Cross, alongside Irish headliners More Than Machines, Your Illuminations and Cuecliché.

The evening was kicked off by Cuecliché – but I have to admit I didn’t make it in time for the set as I thought the event started at 8pm. Having checked them out since they sound awesome, so I’m gutted to have missed it, but I’m sure they were an excellent prelude to the three bands we did see perform. (I’m sorry)

The second act on was the hugely entertaining Yorkshire pop-rock trio of Your Illuminations. The first thing that struck my attention was that the frontman and bassist were literally illuminated, with lights around their guitar and bass.

A bright point of the set was an emotional tribute to the recent attacks in London and Manchester, with a big reverby rendition of Jimmy Eat World’s Hear You Me.

Next up was a track called Stay XVI (which got a laugh from a girl behind me), which lead singer Bobs proudly proclaimed was “actually one of ours, and finished.” It sounded full-on pop-punk with a big punky solo after the second chorus before dropping down to a flicking riff and reverby vocals – and listening back after the set, this is a really fun pop-punk track.

They followed that up with a track that was “absolutely not finished,” but sounded pretty damn good all the same. Little lights opened up with gloaty guitar chords then high-pitched lingering chords that fed into choppy palm muted and a catchy chorus.

The band, donning the finest selection of snazzy shirts you’ll see from a band, is full of energy, which was perfectly portrayed in final track of the set, Hey Scarlet – the opening track from last year’s EP Mania. The track ended with Bobs jumping into the audience, then dramatically dropping to the floor on his back and flailing around playing his guitar then smashing it on the floor.

Your Illuminations are a really fun live band, with loads of energy, great audience participation and they’re generally fun to watch.

Next up – not after seeing a guy taking photos of an attractive Brazilian girl’s snazzy glittery high heels – were our friends over at Jack The Envious, led by enigmatic frontman Nir Perlman.

The Israel-hailing rockers opened up in fine style with a big punky opening riff then huge screamed vocals before rocking out with huge smashing cymbals driving them forwards.

Their third track gave us something brand new in the form of Shut Up (or Out, not sure). It opened up with a heavy rock out then wild guitar noises through the opening verse, and in fact it was such a huge track that guitarist Guy Avnon broke a string mid-song, leading him to switch to a conveniently placed backup guitar.

That was followed by another new track, JTE’s latest single Begging For More – which we reviewed in last month’s article on the band. Nir got the crowd involved by getting us to sing the ‘Who-oh-oh’ vocals after “on the way down singing,” which sounded massive. And it’s a great track which, together with the previous song, promise plenty for new EP In Your Own Way, which is out on 14 July.

That was followed by something very different. The band launched into a cover of Gorillaz’ Feel Good Inc, and made a hell of an improvement on the original song with some huge screamed vocals from Nir.

JTE proved they have a great live show to backup the great sound we’d already discovered, and we’re looking forward to hearing much more from these guys.

The headline act of the night was Dublin rockers More Than Machines. They opened up with Kid At Heart, which opened up with big guitars and awesome fast-paced vocals from vocalist Leah Moore, then a big smash out.

More Than Machines are another really fun live band, with bassist Brian Loughney full of life, spinning around in circles and jumping into the crowd, while Moore’s voice is huge with big guitars and heavy bass supporting it superbly. 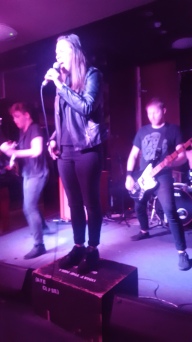 Possibly my favourite track from the set was New Parts, with opened up with an awesome bass solo soon joined by big guitar chords and a heavy opening verse driven forward by loads of cymbals and leading into a big singalong chorus.

The band then dropped the pace a little, with Moore telling the crowd “Get your lighters out, actually don’t ‘cos if this place goes up we’ll all be fucked.” Loughney began the track standing on his amp, with low-tuned guitars under the vocals then a big drum roll, a smash of guitar and a call of “Waking up again with a heart attack” kicking the song into life.

Another highlight was new single Youth, which was the only track I knew heading into the evening and is well worth checking out with its catchy vocals of “We are the youth, the forgotten truth.” And the band’s first single, the pop-punky I’ll Forget You was equally popular, opening up with choppy chords then drawn out punky high notes, huge drums and then a big guitar solo.

More Than Machines were a fitting ending to an excellent night of pop-punk meets more post-hardcore punk in the form of the boys from Jack The Envious. All the bands we saw rocked, had bags of energy, clearly work ridiculously hard and put on a great show – so give them a follow, support them, listen to their music and get out there and see them next time they’re in a town near you.

2 Replies to “Gig Review: More Than Machines, Jack The Envious, Your Illumination & Cuecliché”