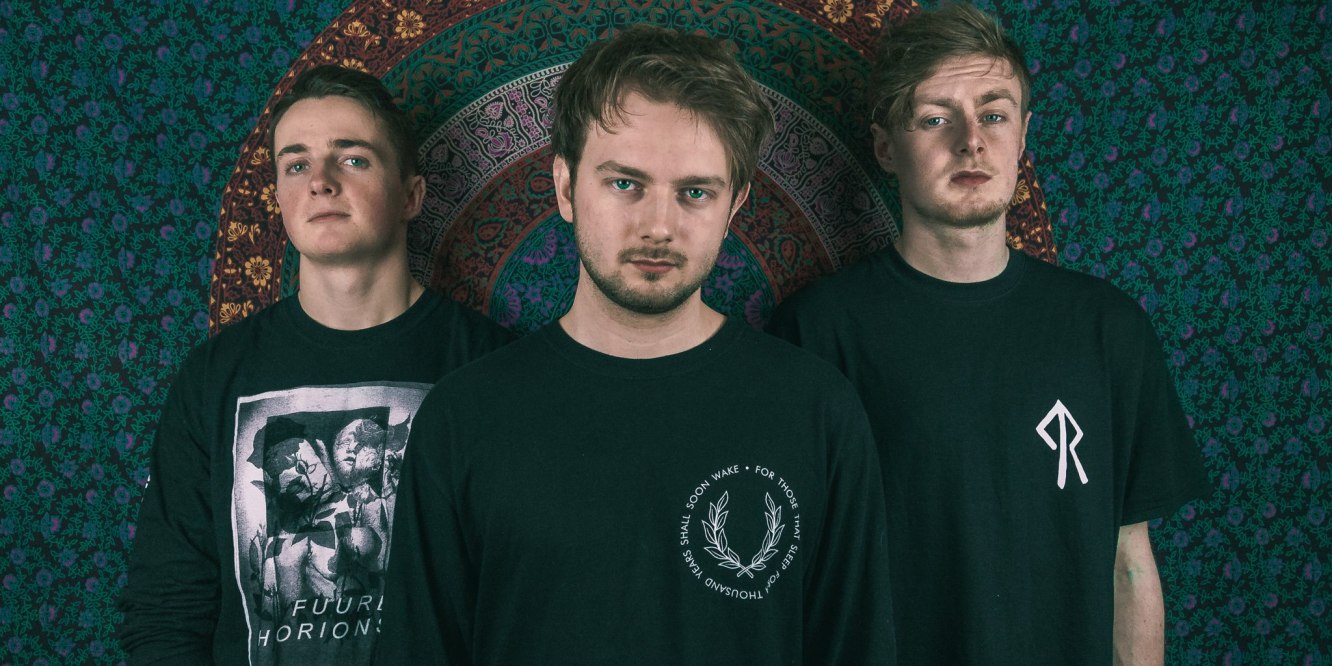 The first time I checked out Glasgow’s Donnie Willow I was instantly hooked by their fusion of hooky guitar riffs and vocals, and alt-rock meets hardcore sound. Then, having found them on Facebook, I became obsessed with one of their fans’ comments, which claimed that their new EP Exhibition is “like listening to Elton John fight a horse with a spoon.” Brilliant – kudos to you Jordan Campbell.

What Jordan’s getting at here is that Donnie Willow have a huge sound that’s like fusing together the raw edginess of Glassjaw and hard-hitting power of Deftones with the subtlety of Arcane Roots and Scottish rockiness of Biffy Clyro. It’s a truly winning combination that fuses heavy riffs with an intriguing mix of time signatures, intricate guitar lines and vocal harmonies that power into expansive choruses.

The trio of Arthur Piddington (guitar, lead vocals and lyricist), Peter Bunting (drums) and Sam Peppiette (bass and vocals) first met at school four years ago when they were all 15. As Peter tells us: “Pete and I used to play a lot of guitar hero together and that’s when we thought ‘let’s make a real band!’ So we stole Sam from another band and spent the next few years writing and playing shows, but ultimately learning how being in a band works. The more we worked on it, the more rewarding it felt and now it’s all we want to do.”

The good news is that these three guys from Glasgow have studied well, and they’re very good at being a band – as evidenced by the stunning new EP Exhibition, which came out last month. Their debut release Inhale, Exhale attracted plenty of praise but this latest offering raises the bar higher for the trio, with a beefier, bolder and more experimental glimpse of what’s to come from this exciting young band.

The EP kicks off with a big reverby guitar sound and a funky little low-tuned riff in the intro to Stuck. That’s joined by rolling drums, a big scream and a huge wall of guitars and drums then drops down into a funky verse that builds intensity. A repeat of the opening riff is met by huge screams and more awesome riffing, then dropping down into another more mellow verse that soon bursts back into a big, busy chorus. A mellow section with vocals over slow guitars slowly builds with big vocals then drives into a big smashing rock-out to bring the opener to a close. This is as good an intro song you’ll hear to an EP, with hooky guitar riffs you can’t help but love in tandem with Arthur’s big vocals.

That’s followed by the massive Blessed Company, the lead single off the EP. A big scream leads us in, with a cool low-tuned riff then clean vocals mixed with big screams, culminating in one huge scream and heavier guitars. A section of high-pitched vocals follows ending with the line “I don’t want to be in your blessed company” then a big hit of guitars followed by another huge section of heavy vocals with atmospheric high-pitched guitars that eventually give away to another smash of big riffs and vocals. The track concludes with the awesome lines “And I’ll be sure to let you know when everything’s so fucking boring, and I’ll never ask why you would need a reason to stay when everything’s so fucking boring” then some big screams and a cry of “Fuck it.” It’s impossible not to bang your head and sing along to this infectious track and, if drums are your thing, then check out this cool drums play-through video below:

That flows straight into the hard-hitting intro of high-pitched guitars, smashing drums and big riffs in the energetic Toys. The verse builds in intensity with some really cool vocal and guitar combinations before launching into a massively powerful chorus. In customary style the track closes out with a brutal batch of screamed vocals, with clean vocals thrown in, and huge riffing. Check out the video below:

The EP closes out with the more melodic I Still Remember, which opens up with a funky guitar riff then melodic, high-pitched vocals and a drifting guitar lick, before launching into a singalong chorus with some heavy yet technical guitars in support. There’s some really cool melodies through the light chorus, before it blasts into another heavier, yet still melodic chorus then ends with high-pitched vocals and a hit of guitars.

The record was produced by Bruce Rintoul (Twin Atlantic, Fatherson, Vukovi) and mastered by Ed Woods (Reuben, Twin Atlantic, The Xcerts, Manic Street Preachers), which really sets the band in good stead in addition to their ability to write a rocking track.

In terms of what influences their music, Peter tells us: “Mostly relationships, memorable experiences, and struggles like everyone goes through. I believe a song needs to be accessible so that listeners can connect and relate to it. That’s how I’ve found my favourite tracks, if I can understand the song writer’s perspective.

“Collectively, Reuben and Biffy were big influences whilst we were growing up, but personally Jeff Buckley and Kurt Cobain have been my biggest inspirations.”

And if you like what you hear then there’s plenty more to come, as the band are in the process of writing an album and have a huge amount of demoing in the process. They also have a couple more tours in the pipeline and a few more surprises, on which all will be revealed soon.