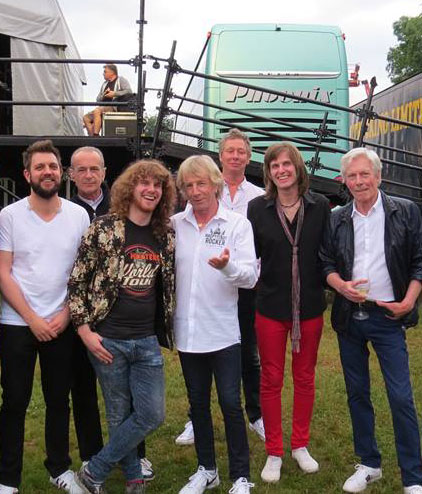 They make music to swig beers to. They play riffs to headbang with. Their tunes make you want to drive over the speed limit with your windows down and the volume up to 11. Not that we’re advocating doing that, exactly.

Consisting of Chris Ready on vocals, James Ready on lead guitar, Andy Burlace on drums and Alex Rosedale on bass, the band last month released their third album, titled WW III. Recorded over 13 days at Sonic One Studio in Wales and mastered by Grammy winning Sean Magee, it’s 12 tracks worth of feel good fun. It also includes three bonus tracks, one of which is a tribute to the late Rick Parfitt of Status Quo fame. Here’s what you can expect from it in their official album promo:

If ever there was a case for ignoring the advice of never meeting your heroes, this is it. After Walkway’s first support slot with Quo, the older legends took such a shining to the young band that Walkway were asked to do more support slots. Chris Ready recalls: “The guys made a point of coming up and talking to us. That’s quite special as they’re legends in our eyes.”

“Now, the Quo shows are a real highlight for us. The fans take a real shine to us, which in itself is quite an achievement considering how loyal they are to the Quo. And now a lot of the Quo army follow us wherever we play now.”

With Rick’s passing in December, the band consider the Quo support slots to be much more special. “Especially since we opened up for the UK Quo shows of Rick’s last ever tour,” Chris adds. It then seems only natural then that they pay tribute to the legend in their new album, with a cover of Quo’s Rain, featuring the original Status Quo drummer, John Coghlam, on the track as well.

Having been around for almost ten years, the band remains unsigned. “We’re still waiting for the right deal,” Chris explains. “We’ve always aimed high right from day one. If it means being stuck on a shelf and not to allowed to play, we’ll happily stay unsigned.”

Their stubbornness hasn’t seemed to dampen their career, however. They’ve opened for some big names in their time, including The Darkness, Black Stone Cherry, Slade and, of course, Status Quo.

They have a tenacious work ethic, having recently played their 1000th show on the day of their album launch. And it’s this constant performing and graft that has helped them come into their own. “We’ve progressed a hell of a lot of the years, and that comes down to experience and getting a better understanding of yourself as an artist,” says Chris.

So what advice does he have for new bands, keen on making their own mark in the scene? “Learn your craft first, and sort your image out afterwards. And don’t have an attitude, no one likes a diva,” says Chris. Wise words indeed.

I write words for money. View all posts by J Ho

One Reply to “Introducing: Walkway”