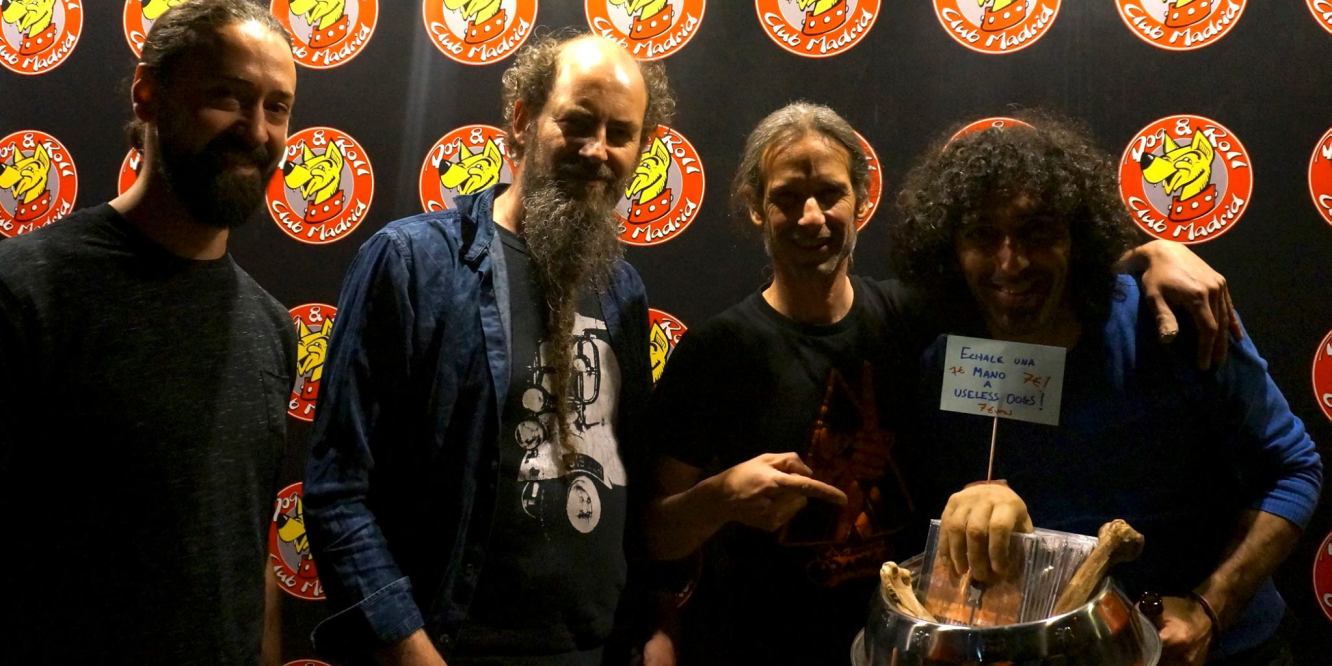 Spanish rockers Useless Dogs are an intriguing fusion of rock styles heavily influenced by their fascination with music of the 60s and 70s.

The quartet, made up of songwriter and vocalist Rafa Suarez (aka Mr Dogman), lead guitarist Javier Rojas, drummer Miquel Ferrer and bassist Javier Santana, are relative puppies, having been together as a band for a year, although the latter three have played in and around the Spanish music scene for around 20 years.

Rafa, a sculptor born in Ohio, tells us he always wanted to compose songs and played around with chords and melodies when he was a teenager. He eventually managed to record some demos and played them to his long time friend Javier, an experienced musician he had met 26 years ago “playing blues and ole Rock and Roll in the streets with a pair of crappy Spanish guitars.”

Luckily, Javier liked it and they decided to get recording, which was the starting point for Useless Dogs. Several musicians liked the smell of it and a band was born. As Rafa tells us their formation was: “Not the usual way, probably the opposite way. Bands normally get together, play and then record. I think it’s an interesting way of starting, to gather around a bunch of songs, love them and record them. This is the experience of a dream turning real. I always dreamed about playing in a band and shooting all the energy that sometimes has no other way out.”

The quartet have honed a raw sound that deviates across a variety of styles of rock, often within the same song. They basically do and play whatever they feel like, and they make it work in their brand of “Dog music.”

The culmination of this was the release of debut album Play or Fall, which fuses blues influences with rockier moments, in which their fascination with music from the 1960s and 1970s is allowed to flourish.

There’s moments of chilled rock like the delicious Grey Sundays, contrasted by more upbeat 70s-esque rock like second track Fall and the funky, fast-paced Crawlerman with its delicious guitar licks. A major factor in the appeal of Useless Dogs is their fun, engaging vocals, of which case in point is the effortlessly cool Chasing Dandelions, with its random lyrics and funky mini guitar solo alongside repeats of “Chasing dandelions.”

But Useless Dogs in a nutshell is funky rock that you can’t help but jig along to, of which penultimate track You Don’t Know is testament, with its delicious wah-wah riff that pops up throughout, alongside catchy vocals.

As Rafa explains: “In the album we tried not to process too much the sound itself. We like it to be ‘a bunch of dogs making music’ but on the other hand we like to take care of the songs, arrangements etc… Another thing is the variety. In Play or Fall you can find harder or softer songs. I like that in an album. I can’t stop composing both. We are aware these are times where music, and probably bands and audiences. like to get ‘tagged.’ Useless Dogs don’t.”

We asked Rafa to sum up the Spanish rock scene, and he told us: “The music scene in Spain is alive and active with many rock bands here, many good musicians and bands producing good music. Getting noticed is as hard as everywhere and as hard as it has always been, I guess. Singing in English can make it a bit harder too, you are starting from zero I think.

“Gigs, that is something else. I don’t know how this goes in other countries but here we have to face the fact conditions are getting harder. One has to be careful not to end paying to play. The clubs where you can play here in Madrid have started with the idea of renting the space to the band, so you better be careful and choose a show where audience will attend, if not you might have to pay. It’s hard not to get cranky about this, but there are still some ‘band friendly’ places to play so, being patient is the way.”

Useless Dogs are set on recording new music, and hopefully making it to the UK shortly. As Rafa explains: “The main goal is recording new stuff, we love being in the studio and all that comes along with it. The songs are there, waiting. But we want to focus this in the correct way. Play or Fall is the first growl, now time comes to bark and howl! Let’s see if someone wants to help a little, if not, self production will be the way to go again, which is nice too. But, we have set our eyes on UK. We think our music can fit there, a feeling. There are some chances to leap over the sea and make a doggy visit!. We’ll see what comes out of it.”