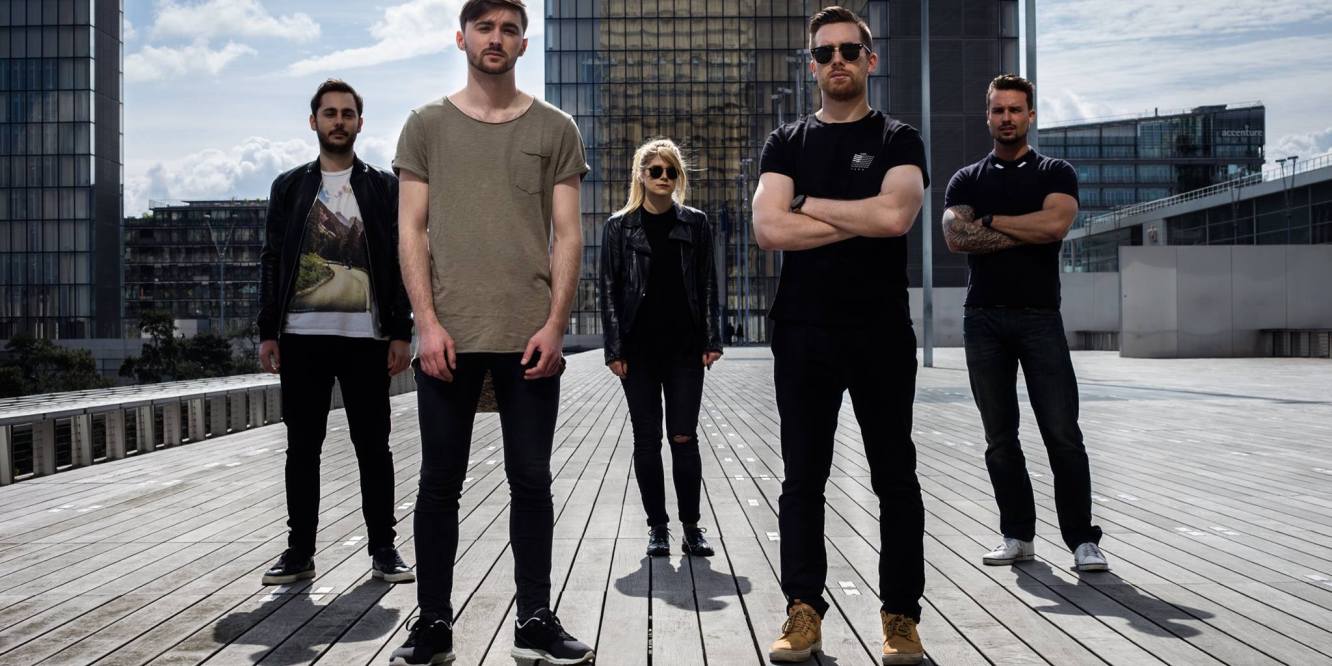 French metal isn’t a genre we’ve delved too far into, but if Parisian metalcore quintet DVWKINS are anything to go by then perhaps we all really should.

The five-piece have created a powerful yet melodic sound that deliciously contrasts between the clean vocals of lead singer Djoul and guitarist Antonin’s screams, with a big metalcore instrumental support providing a dramatic backdrop.

As the band themselves tell us: “If we had to determine to which genre our music belongs it would be some sort of melodic metalcore coloured with a few deathcore nuances. The main peculiarity of our band is undoubtedly the duality between the clean and powerful singing of our frontwoman and the male screaming vocals.”

The band’s sound will get its first airing with the release of debut EP Blinding Sights next week. We’ve had a peak preview of the four-track EP, and it’s spectacularly good.

The EP begins in attention-grabbing fashion in the intro to opening track Pedantic Wings. A big scream and a choppy guitar riff, supported by driving drums, drop down into a verse of delicate vocals contrasted by bursts of huge screams, with an awesome guitar riff adding huge depth to the sound. The chorus is big and atmospheric with Djoul’s impressive voice hanging over lingering guitars then giving way to a smash of massive screamed vocals and the choppy riff driven forwards by pounding drums. That’s followed by a fast-paced guitar solo that drops down into a big metalcore smash-up.

Next up is Carousel, which opens up with big screamed vocals, chugging guitars then a big guitar slide and heavier guitar chords as Djoul’s vocals come in. The contrast between clean and screamed vocals is prominent throughout, along with a mass of huge double bass drum action. Check it out in the band’s first ever music video below:

Next, Sleepwalker begins with a guitar slide and repeating guitar riff with heavy lingering guitar chords, then launches into a smash of heavy screamed vocals with chugging guitar riffs and wild drums. A cool mathy metal solo follows before Djoul’s vocals bring the pace down a notch and flow into a singalong chorus. That’s soon forgotten as a huge smash of terrifyingly heavy vocals, awesome blitzes of guitar and booming low-tuned chords take over again.

Final track The King is Dead kicks off at breakneck speed with big chugging guitars then a drum roll that leads into a blitz of screamed vocals. Distinctly Nightwish-esque haunting vocals then come in over a dark instrumental backdrop, followed by another smash of metal riffs and chilling screams. The track builds in intensity with Djoul and Antonin’s vocals combining then giving way to a massive high-pitched rip of screaming guitars, followed by low-tuned chords and throaty screams.

This is an awesome debut EP that showcases an entertaining, dramatic new sound. Djoul’s vocals work superbly in offering some light relief from the chaotic metalcore brilliance going on behind her, and there’s all manner of huge guitar riffs throughout. I firmly recommend you give it a listen when it’s released next week.

When asked what we should expect from the EP, the band told us: “A harmonious contrast hopefully! Our goal with this EP was to manage to smoothly balance powerful riffs with catchy melodies as well as female clean vocals with male screaming vocals while keeping everything within a metalcore vibe.”

And in terms of what inspires their music, they add: “Well, as a musician there always comes a time when you have to really ask yourself whether you want to be serious about it or you just play for fun – both options being totally fine. For us it is the former: a mix of wanting to materialise our inner musical ambitions as well as trying to reach out to people.

“The songs we have written so far address and discuss topics such as abusive and violent relationships, obscurantism… we do not write the most heart-warming lyrics!”

We’ve spoken to a couple of French bands in the last year or so, but we asked the band to give us their view on the local scene. They told us: “It is sort of complicated for us to compare the French scene with other countries as we might lack knowledge about other countries. However, even though there are a few really famous French metal bands (Gojira, Betraying the Martyrs), France was never the most enthusiastic country as far as rock and metal are concerned, unlike northern Europe and America. There are some promising emerging bands for sure though… keep an eye on Resolve (from Lyon). These guys are legit.”