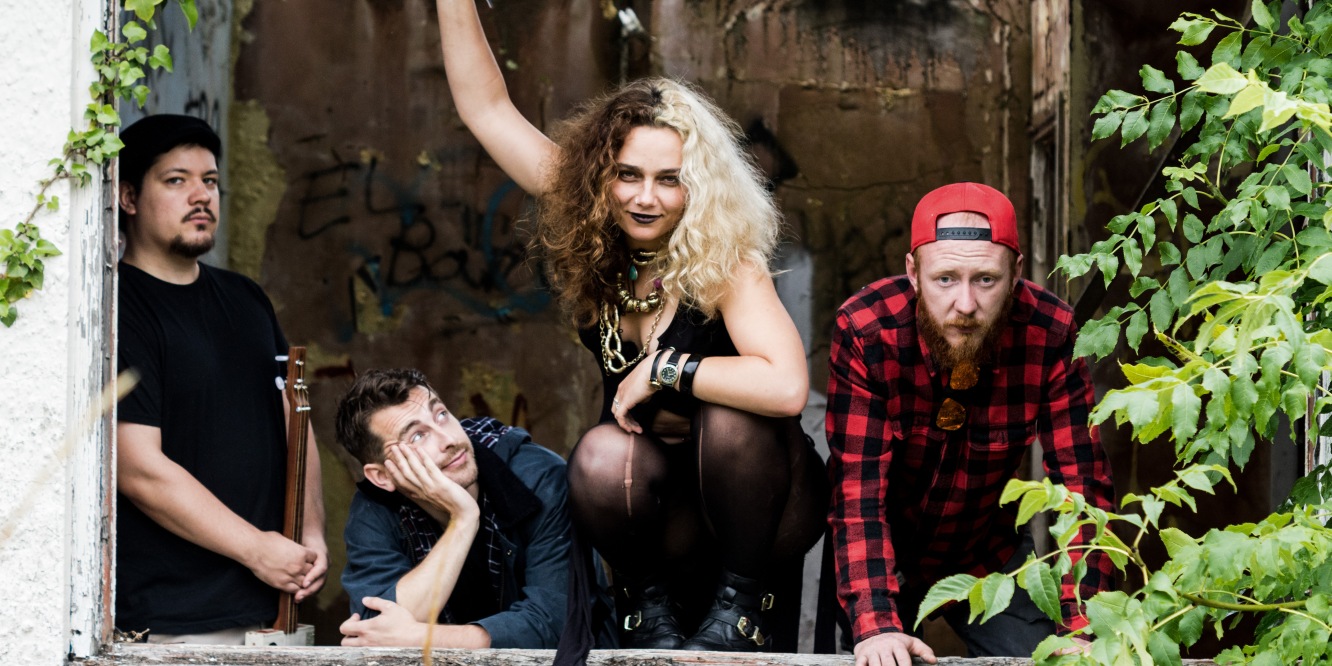 A few weeks ago we received an email in the GigRadar inbox telling us “We hear you are the dudes” in the subject line. Now, this flagrant flattery was obviously a lovely boost to our ego, but of course we wouldn’t allow such bribery to cloud our vision. Luckily though, the cheeky senders backed up their devilish charm with a delicious brand of indie rock.

Reading on from the introductory ingratiation we discovered that Charlie Says are in fact not only friends with the guys in Fire On The Roof, who we introduced you to last month, but also inspired their pals’ band name.

The Cardiff-based band first formed back in 2012, with guitarist Dai Amaro, drummer James ‘Jimbob’ Jones and bassist Jamie Parry, enjoying immediate success sharing stages with the likes of Kids In Glass Houses, The Blackout and Capdown with their then lead vocalist.

They described those early days to us: “Charlie Says is the traditional romantic teenage story. Three best friends jamming together in their parents’ back rooms, writing original music flowed easily from us and our musical influences from the likes of Muse, Foo Fighters and No Doubt soon showed in the songs we wrote. Just like any hobby you start to take the next steps and soon we took to the stage, worked with many producers and recorded across the country, had the privilege to play to hundreds of people over the years, and had the opportunity to work with wonderful front-women, making close friends along the way.”

A couple of vocalists came and went, as did a six-month hiatus, but just over a year ago they returned with the impressive vocals of Alcie Bela, who it turns out is the owner of the roof that “was on fire,” in tow.

In the band’s words: “It was October last year when Alcie came to make her entrance into our lives in the Full Moon (which is related to why the EP is called Lunarians). And in what seems like a flash now, came to play her guitar and sing on our living room floor. Leave the Light On left us encapsulated, it’s fair to say that not only did she leave the light on, she brought Charlie Says back to life! Ever since we’ve gone from strength to strength, and Alcie is consistently the star of the show on and off stage.

“Alcie brought us back to our roots. With other singers we’ve adapted our style to suit them, but Alcie has inspired us with her own music and her enthusiasm for songwriting to go back to our instincts and, as a result, our music has become more passionate, fun, and meaningful.”

As the guys allude to, this year saw the release of their first EP with Alcie on board, Lunarians – which oozes those final three adjectives.

It opens up with a big chunky Arctic Monkeys-esque guitar riff in the intro to Never Loved You Less, which leads into a light opening verse with Alcie’s vocals supported by light guitars. The intensity picks up with bigger vocals and guitars as it builds towards a singalong chorus with the awesome vocals: “I sometimes wish we never met, Eternal sunshine spotless mind, We need regrets to be our best, Never loved you more never loved you less, Is this the way you were meant to be, Uphill battles never free.” That funky opening riff kicks back in ahead of a bass heavy verse, then building towards another chorus which flows in big drawn out vocals and a winding guitar solo that flows into a final chorus.

The pace drops down a little in the funky opening verse to Smokey Jones with a fast-moving bassline and floaty guitars supporting Alcie’s singalong vocals. It suddenly picks up the pace as the chorus – describing a shady character by the name Smokey Jones, more on that later – kicks in. The vocals are brilliantly descriptive, there’s driving rocky drums and guitar riffs, and it’s a deliciously fun, engaging song.

Next, the aforementioned Leave A Light On begins with light guitar chords supporting Alcie’s light yet powerful opening vocals. Building guitars through long vocal notes suggest a pickup in pace, only for it to drop down again, but it soon delivers a rocky blast of guitars in support of Alcie’s delicious vocal delivery – which is ridiculously good.

The pace picks up in the feisty Anna With Attitude. A little guitar riff opens up, then a mini drum roll brings in Alcie’s rockier vocals which really kick in through a catchy chorus which, when repeated, flows into a mass of wailing vocals then a big guitar solo.

The EP ends with the delicious Sing Me To Sleep, which kicks off with a fun bass line that’s soon joined by Alcie’s laid back echoey vocals and floaty guitars. A heavier chorus follows, with really fun vocal delivery, before dropping down into another atmospheric verse that again builds into the chorus dominated by Alcie’s bursting vocals.

The band describe their music as: “Melodic powerful choruses, with 90’s rock overtones and a singalong factor. An eccentric front woman glowing with live energy, guaranteed to get you moving,” which I probably couldn’t have phrased any better myself.

And there’s more than a reoccurring theme behind the music, as the band explain: “Our theme is often around seizing a character’s essence. It’s not always about ourselves but we use feelings from past events or general atmospheres that our memories captured to try and paint a picture, and Alcie will perform that character like an act. Smokey Jones is about a strange man with a knife tattoo, a cigarette and an appetite for whiskey at the back of a dim bar in the 70’s/80’s – which is a cliche for sure, but we wanted to capture that bar so when you listen you feel like you’re there!

“In short, our songs are just about being human; falling in love, falling out of love, friendship, sadness, happiness. Its a story of those things we’ve all felt and an exploration into where it led us because of it.”

Finally, we tried to tackle the issue of who the hell Charlie is and what he / she has to say, but the band remained tight-lipped, explaining: “Usually we’re asked where does Charlie come from, and never who Charlie is. That’s not to say whoever Charlie is, is having the existential crisis I’m alluding to. I guess Charlie has been whoever they needed to be to match the times; fun and loud, serious and brooding. Right now, Charlie is adventurous and excited and saying, ‘Everybody’s welcome on the Charlie Says parade!'”

Aside from being flattered by their thinking of us “as the dudes,” I really enjoy the sound of Charlie Says. Alcie’s vocals are powerful yet seductively mellow, which really reflects her influences of Portishead, Skunk Anansie’s Skin and Grace Slick. These are contrasted by some fun rocky instrumental support, with big riffs, fun basslines and driving drums.

Charlie Says are hoping to write (and finish) lots more songs soon and, not content with 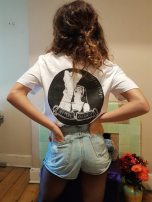 making music, they’re also opening their own online t-shirt company with a special edition range available for each song – see right for an example! And, if you happen to be in Cardiff on 11 December then you can see the band play live at The Moon. More info on their gigs is here.