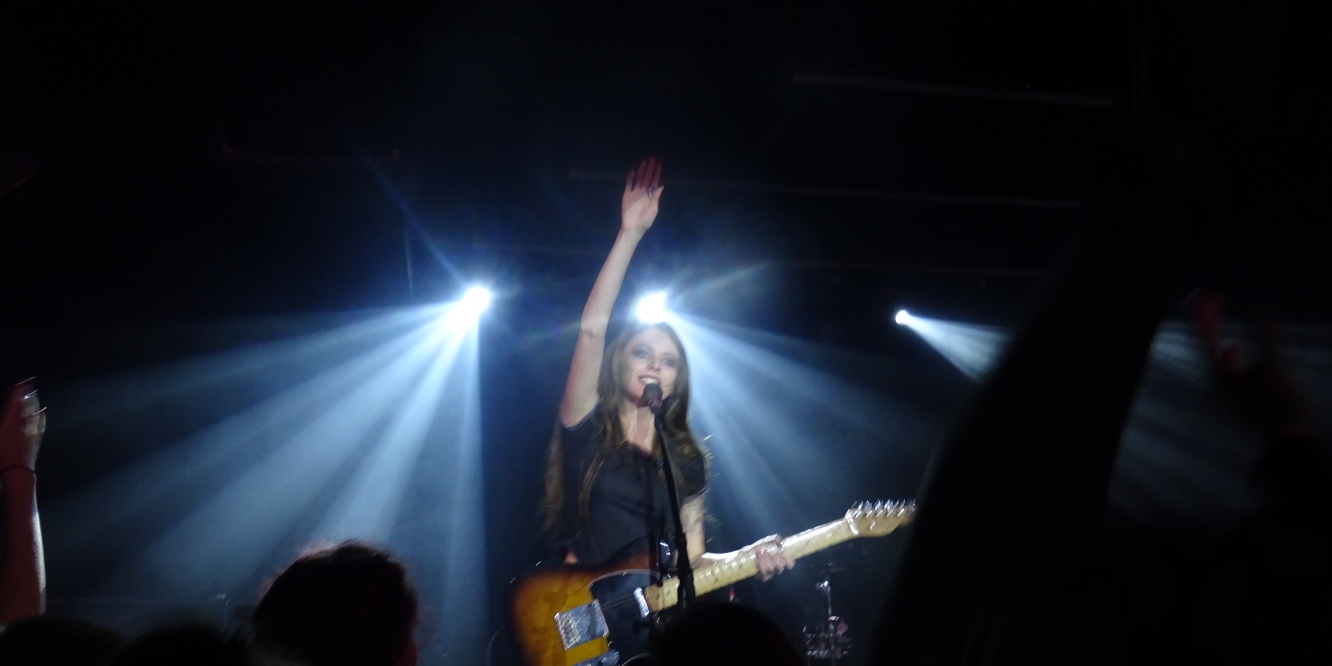 Last night we were treated to two great bands of contrasting rock styles as Courage My Love and Chapter And Verse took to Borderline in central London.

This was my third time seeing East London’s finest Chapter And Verse, our New Band of the Week back in January, live, and once again they did not disappoint, putting on possibly their best show I’ve seen to date. Vocalist Josh Carter was on fine form and full of energy and they sounded huge on the Borderline stage.

The band took to the stage to the sound of Nirvana’s Milk It, which set them up for a rocking set. They opened up with Josh and drummer Ash Morton singing the high-pitched intro vocals to The Casket, the opening track from their incoming EP in the new year, which built into more intense vocals.

As these dropped out Josh shouted “Good to see you London” as they dove straight into awesome new single Magazines, which you can check out in our review. Powerful loud guitars smashed away under Josh’s big vocals, then dropped down into repeats of the line “Why would you lie to me” and it ended in a huge rock out.

A cry from Josh of “We’re a band called Chapter And Verse and we wanna have faith in the new breed” led nicely into The New Breed, the opening track from last year’s The Wolves Back Home EP. It was once again absolutely huge, with Josh bouncing around the stage as he delivered his almost snarling vocals. Get a taste for it in the video below:

They dropped the pace down a little with another new track 11 Hours in Real Time, which opened with lone vocals then jumped into a rocky chorus. Cool floaty guitars came in for the second verse, which ended on Josh hitting a huge high note then almost spoken words “watching you fade away” over a big chunky bassline and floating guitars, then ended on a huge drum roll and more big bass. 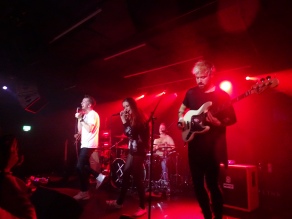 a lot of cool bands and shows here” and it was clear the band were loving the opportunity. The brilliant Ink followed, starting slow with Ash playing the drum machine with a slow guitar and bass, then Josh calling out “This song is about obsession” and diving into some powerful vocals, hits a ridiculous note that drops into the catchy repeats of “One in a million” – which are still stuck in my head now – for which he’s joined onstage by Courage My Love vocalist Mercedes Arn-Horn, before picking up in heaviness as the track comes to an end.

Chapter and Verse went out in style with the rocky Slave, which finished in a huge flash of lights and big final chorus. Josh then got to the front of the stage and shouted a load of vocals, followed by a big metal smash-up as bassist Jonny Hopwood did his obligatory running around the crowd.

It was an excellent start to the gig, with the band easily looking the slickest I’ve seen them and promising something pretty special with their performances of tracks from next year’s EP – which I can tell you now, is awesome.

They were followed on stage by Canadian trio Courage My Love, who opened up with the excellent Animal Heart. It opened with Mercedes blasting out some awesome vocals while playing the keyboard, then dropped into a big cymbal and bass breakdown that finished on Mercedes hitting a huge high note. A final chorus followed, dominated by even more impressive vocals.

A couple of poppier tracks followed, one of which ended on a big smash up then Phoenix killing it on the drums. Mercedes then asked if there were any old school Courage My Love fans and they played Skin And Bone, which saw cool singalong vocals followed by a big rock out then building vocals that led into ending on a huge high-pitched vocals by Mercedes.

That was followed by Love Hurts, from this year’s album Synesthesia, which fused moments of heaviness with singalong poppy rock. Mercedes then moved off guitar, with bassist Brandon Lockwood taking over, and told the audience “Sometimes people try to make you feel like you need to change, and this is about telling them to fuck off” ahead of the band playing Never Gonna Change. It opened with Mercedes’ vocals and keyboards over drums, and was a bit poppier but with a singalong chorus and big rocky guitar chords.

Mercedes jumped back onto guitar and addressed the crowd with these words as a pre-cursor to Need Someone: “A couple of years ago I was in a long relationship with this guy who was a lot older than me and tried to manipulate me and made me hate myself. I became someone stronger and braver and who loves themselves more than ever before.” It was another catchy, poppier track that opened with lone vocals soon joined by bass, then jumped into the enjoyable vocals “If you need someone, It doesn’t have to mean that we should fall in love.”

with her sister Phoenix moving onto the drum machine for Dirt. Her drums supported gradually building vocals, then Josh joined them on stage for the vocals “I couldn’t keep my hands to myself.”

They closed with another track from the latest album Stereo,  which saw big drums that continued through the opening verse then a fun bassline that built towards a big singalong chorus.

By popular demand they swiftly returned to the stage for a couple more tracks, the first of which was preluded by Mercedes saying “It’s amazing to be in another country where people give a shit about our music,” which came across in how thankful they were towards the audience – with Mercedes repeatedly telling the crowd “we love you.”

The first encore track was Dark Wood, Dark Water, which started off slow and melodic with Mercedes’ delicious vocals on the repeats of “I’ve found a safe place in you.” It built up with drums kicking in over wild high-pitched guitars and more intense vocals, to the extent that a guy in front of me crowdsurfing, then impressive high vocals as the song gradually wound down with light guitars and atmospheric background noise before the guitars kicked back in.

They signed out with a song about which Mercedes revealed “It’s a dancer” and was dominated by cool singalong vocals then went out on an impressive high note. This was a cracking evening, with Chapter And Verse clearly the heavier of the two bands but both of whom merged brilliant melodies with powerful heaviness.

Get a taster for their performance in the video below:

The two bands continue their tour with three more shows, starting tonight (29 November) at Thekla in Bristol, then The Underground in Plymouth tomorrow night (30 November) and Joiners in Southampton on Friday night (1 December). Courage My Love will be back in Europe in February, and you can check all their gigs here.