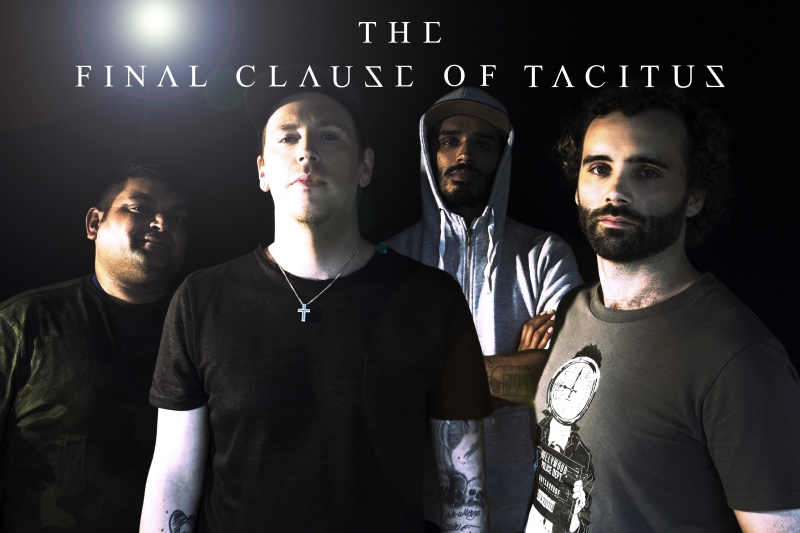 One of the most exciting bands we discovered last year was Reading rap-rockers The Final Clause of Tacitus. I’m delighted that our former New Band of the Week from exactly one year ago are back with a brand spanking new second EP that rocks even harder than their awesome debut effort.

New EP Not Like The Rest is exactly that. I guarantee no other band this year will release a record that will even come close to matching the cool funkiness that this EP exudes in buckets.

It starts in pretty epic fashion with opening track Tables Turn, which starts off with some spoken words lamenting the state of our society, then launches into a huge opening riff, a cry of “Come on” by vocalist Matt Dunne. There’s a brief pause, then a cry of “And so we’re back, straight in with the attack, so what’s the craic” then Matt goes off on his trademark spiralling rapped vocal delivery. It then explodes into a chorus of shouted vocals of “And just like that, I take it back” over the top of an awesome bouncy riff that you can’t help but smash your ahead along to. The second chorus sees some mighty drumming from new man Daryl Malloy, then flows into a big smash-up and a mini guitar solo that set up a final rendition of the funky chorus to bring it to an awesome ending.

Next up, the brilliantly named 5 Minutes of Funk does exactly what it says on the tin (well, four-and-a-half minutes of it, to be exact). It opens up with a big fat bassline from Andy Silva that continues through a rapped opening verse that soon sees a really funky guitar riff creep in. Repeated cries of “5 minutes of funk” hang over the top of some deliciously funky riffs, while the second chorus is followed by a big wah-infused guitar solo by Tom Burden. It ends with a winding guitar lick under repeated screams of “5 minutes of funk.” This is just an insanely cool track.

The funkiness continues on the fast-paced Fingerprint, which opens up with a high-pitched guitar riff over a funky bassline and continues over fast rapped vocals that end on a cry of “See you at the finish line.” Echoey shouts are followed by a return of the cool opening riff that continues through another funky verse that gives way to a heavier riff and shouted vocals. Another funky riff dives in and driving drums pick up the pace under repeats of “I can only” then a cry of “Be like the best” gives way to a deliciously funky riff and big slappy bass.

Next, Try Again (Or Don’t) starts with a slow repeated guitar line that gives way to a funkier guitar line and cheeky bassline, then drops into a heavier guitar and bass off. Matt does his thing through the verse over a really cool winding guitar riff, then the fun guitar and bass off returns again. It also comes back in after a second verse, and proceeds to fun, fast-paced stabs of guitar, then it all stops and builds into a really funky outro with repeats of “You’ll never get it right.”

A heavily wah-effected guitar riff opens up Bad For Your Health, then returns through the chorus of repeats of “I’m bad for your health.” A more intense second verse follows with shouted vocals ending on the same vocals and leading into another energetic chorus. That’s followed by a cool little winding guitar lick then flies into another fast-paced romp of shouted vocals and the funky riff.

The EP closes out with Walk On The Moon, which opens up with a funky bass riff then a big scream brings in a funky guitar riff. A shout-rap verse follows featuring the cool lyric “So we’re walking on the moon until we see the sun,” then rapped vocals over a drawn-out guitar chord before kicking into a cool chorus that ends in a funky riff. The second chorus is followed by a big funky riff and cries of “Yeah you know we’re taking out of this world,” then a repeated stabby riff from the guitar and bass that see us through to another spoken word section.

It ends the record with the line: “The truth of the matter is, what most people don’t realise, that the majority of people suffer their first major heart attack on Monday morning between 8am and 9am. People getting ready to go to jobs that they don’t like, jobs that are making them sick. You see when you’re not pursuing your goal you are literally committing spiritual suicide.”

It may only be late January, but this EP has to be a contender for one of the most exciting records of the year. It builds on the success of TFCOT’s debut record, adding even more big funky riffs and fun rap-rock energy. In Matt’s words: “Not Like The Rest has more attitude, more aggression but even more added funky goodness. We feel like we have definitely gone up a gear with this record.” And he’s certainly not wrong.

We last spoke to the band one year ago ahead of the launch of debut EP Peace In Chaos, so we asked Matt how the record went down. He told us: “The reception was great! The general response was that, for a debut EP, it was a great record. We continued to play shows around the UK all over the year and at the same time we already started work on our next EP.

“During this time we had a bit of a set back when our previous drummer, Luke, decided he could no longer be in the band. Luckily, Luke was kind enough to stay with us until we found a new drummer so we didn’t have to cancel any shows, but this meant we had to train a new drummer up our old music rather than write new music. Then we found Daryl, who worked at the bar of a venue we played at and had seen us a few times. He immediately clicked with the band and picked the tracks up very quickly and we were off again. Daryl’s drumming style was very different and added a whole new element to the way we wrote the new tracks, and I think that will come across in the new EP.”

The band is fresh from supporting the mighty Hed (P.E.) at a sold-out show in Basingstoke last week and have a host of shows coming through the year.

Not Like The Rest is out on 9 February, and the band has launched a Kickstarter project with some unique package merch deals to support its release. So go and support this awesome band in financing this record.