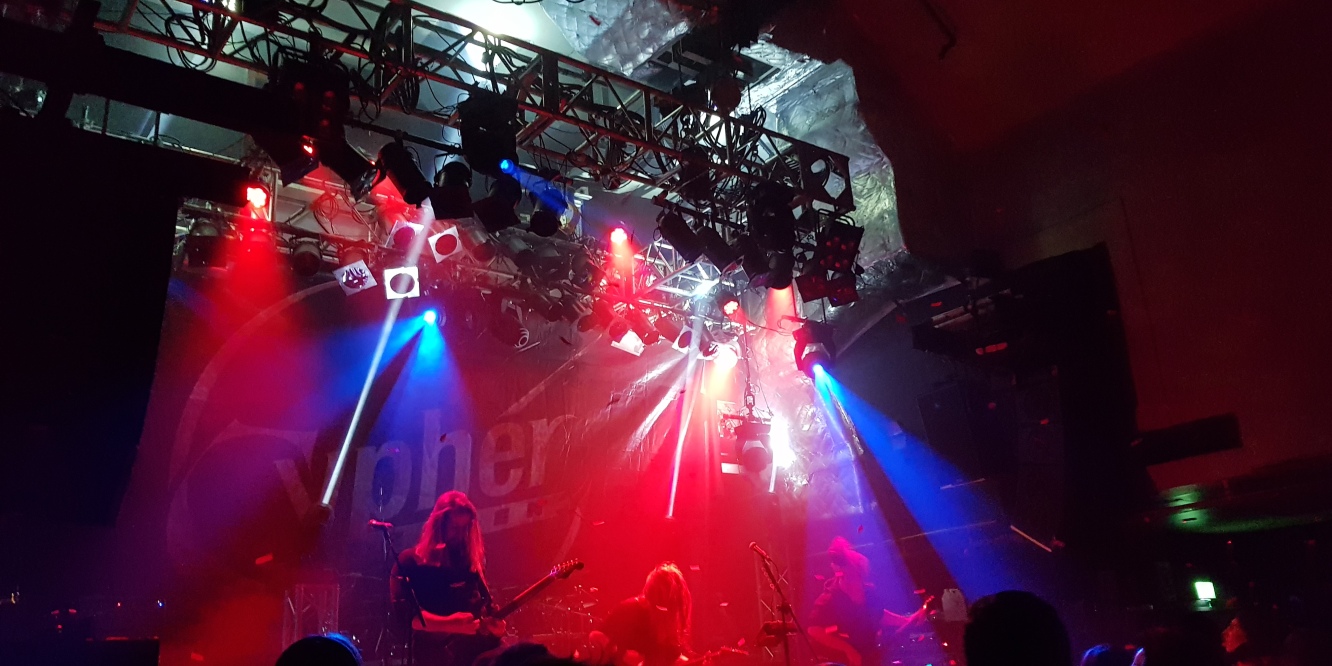 On Friday night we headed down to the O2 Academy in Islington to see two of our favourite new bands Defences and Jack The Envious support the mighty Cypher16 alongside the exciting new heavy-hitting Parabyss.

I arrived fresh from work with Parabyss already half-way through their set, and it’s safe to say that what I heard had me instantly awake ready for the weekend. I encountered a huge, brutal metal sound driven forward by booming guitar riffs and wild screamed vocals.

They had a mini-mosh pit going in the middle of the audience, with six lads being rewarded with free t-shirts for their crazed efforts. Parabyss’ final song was indicative of their huge sound, ending on both guitarists smashing out huge solos then ending on a smash of huge guitar chords.

As an indicator of how heavy they are, they had two guitarists playing eight-string guitars tuned down to F alongside a six-string guitar – meaning a bassist is totally unnecessary.

That heavy beginning was followed by Israeli rockers Jack The Envious, led by the engaging vocals of frontman Nir Perlman alongside a new guitarist who had learnt their songs in just three rehearsal sessions.

n opening track Set Me Off. Then a great rendition of Gorillaz’ Feel Good Inc followed, which really got the crowd into it.

Then they played the excellent Begging For More, also from last year’s In Your Own Way EP. It opened up with a cool guitar solo then dropped into Nir’s vocals and built into the big singalong chorus, which Nir encouraged the crowd to sing along to the “woh-oh” vocals after the “On the way down singing” line.

They kept the pace up with Guilty, including a huge fast-paced solo and ending on another big solo then a heavy final chorus. Then they signed off with another heavy song with a big screamed verse then a big smash-up underneath Nir’s screamed vocals as he did his trademark falling to the floor during the final chorus.

Next up was Hertfordshire quintet Defences, who kicked straight into a huge first track with Let Me In. Driving guitar riffs led into screamed vocals from new bassist Freddie Draper, which set the scene for lead vocalist Cherry Duesbury’s more singalong vocals and the big singalong chorus.

They followed that up with the equally catchy Grow, which opened with huge guitar sound then big looping high-pitched guitars over Cherry’s vocals leading into a big solo. Freddie’s huge screams were a dominant feature through the track, which went out with a huge metal smash-up led by huge drums from Kyle Parke.

And the pace was relentless as they flew straight into Two Steps Back, which opened with a big guitar intro then Cherry and Freddie’s vocals smashing it over big high-pitched guitars.

Next up the pace dropped a little for the more singalong Alleviate, which saw Cherry delivering brilliant vocals leading into a big solo from Calum Wilmot. The song gradually built in heaviness towards a big ending.

The penultimate song saw the trademark act of Calum and fellow guitarist Ian Harrington pull up drums for a big drummed intro that led into the excellent, singalong Scared.

And the band went out on a real high as they got the crowd involved in the last song Beneath The Surface. Cherry split the audience into two and did a practice run ahead of the song, one side shouting “Break through” and the other “Stop me.” It opened with a big guitar riff that gave way to a huge metal smash-up. A big singalong chorus countered by screamed vocals saw the crowd’s repeated words sandwiching Cherry’s vocals, while pounding drums from Kyle brought in a massive outro that ended their set on a real high.

The evening was brought to an impressive close by London quartet Cypher16, who’ll freely admit I hadn’t heard of before the gig – but were incredible.

They appeared on stage with just the drummer and a backing track as the rest of the band gradually joined him, then introduced themselves with a big opening song dominated by huge riffs.

That was followed up by another big opening riff that flowed into a big singalong opening verse of The Whole Sea To Cross. A big solo followed the first chorus, and it closed on a huge guitar rock-out.

They dived straight into another song with another big guitar intro, then it all dropped out and the energetic bassist told everyone to be quiet as the guitarist played a low riff. Then the lead singer jumped up to the top of the stage to smash out a big guitar riff as the track pounded to a huge ending.

Another massive guitar intro opened up next song Down A Level (Part II), followed by a big guitar solo. The drums gradually increased in intensity and the big singalong chorus was followed by a huge fast-paced metal smash-up led by massive drums. If you, like me, hadn’t listened to these guys, then go and give this huge track a listen.

Next, The Deep Six saw huge bouncing bassline smash into a big guitar solo as huge shoots of steam filled the stage as the band rocked out.

The lead singer announced “it’s about to get fucking heavy” as they launched into Castle with a huge guitar riff and booming drums. Big low-tuned guitars kicked in ahead of really cool intertwining guitar riffs that dominated a long outro. Yet again, another awesome guitar-led rock track.

Cypher16 continued to smash out huge bangers, including the drummer coming to the fore in a very Metallica-esque track that I think was Down A Level (Part I), with big bouncy riffs supported by booming pounds of bass drum.

Cypher16 were an unexpectedly good icing on the cake of a really strong lineup of new metal bands. I’m off to give their debut album a listen… and urge you to check all of these bands out.