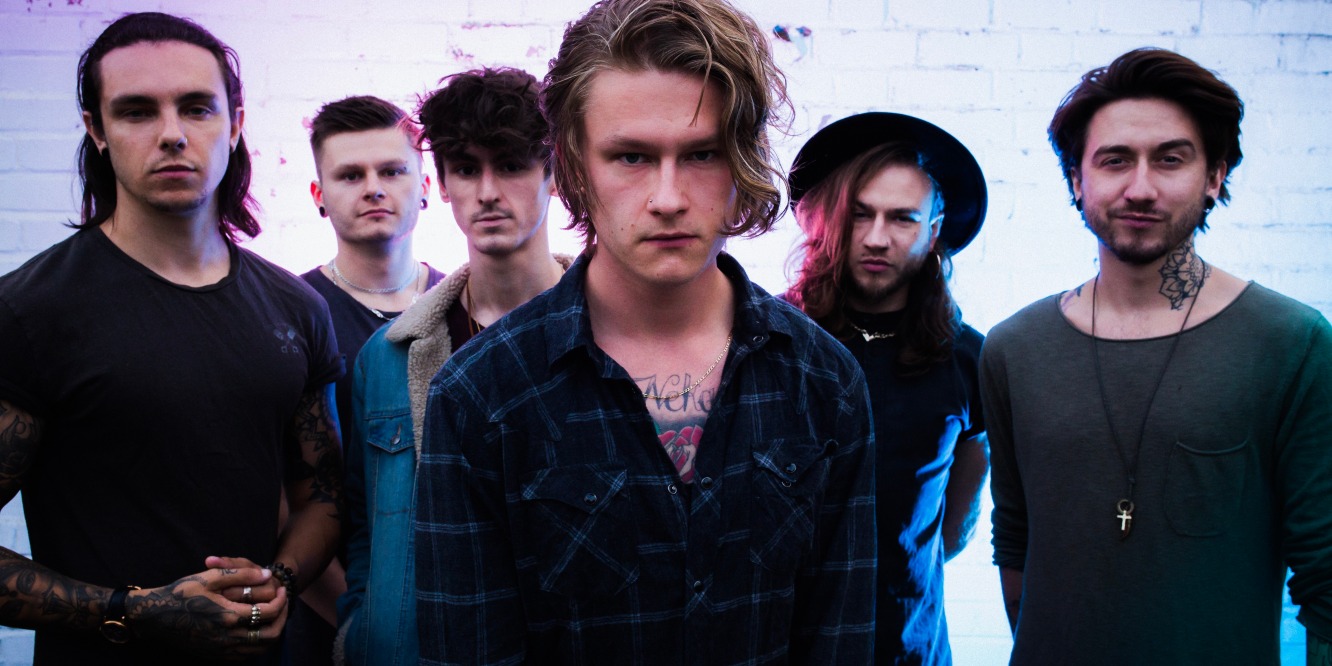 After a brief hiatus following their debut record, Leamington Spa rockers TrueHeights are back armed with new music that has the potential to propel them right to the top of the British rock scene. Bringing new meaning to brothers in arms – they’re formed of two sets of brothers and “two honorary brothers” – the band have worked wonders with second EP Days We Found, which is out next month.

The six-piece of Zakk (lead vocals) and Luke Poland (lead guitar), Steve (synths and vocals) and Ash Maugham (bass), Alex Harry (guitar and vocals) and Kris Farrell (drums) have played up the element of surprise with this new record.

As Zakk explains: “We have tried to include five different songs with five different variations on our sound. Exit Route is probably the heaviest song we have ever written, so we felt that was the best song to come back with after not releasing any new music for two years. I always find it so hard to describe our sound to people. It’s heavy pop rock I guess!

“We all came from different backgrounds and influences which I think has been the main factor in shaping our sound. We wanted to make something that people could feel. We wanted to write modernised rock that punches you in the heart and makes you sing at the top of your lungs.”

The delicious recent single Catalyst exudes comparisons to the likes of Deaf Havana and Kids In Glass Houses. It opens with winding vocals then the repeated line “If I let you know, I let you go” over palm-muted guitars then launches into a blitz of rocky guitars. Zakk’s huge vocals then kick in with a massive singalong chorus. Check it out in the video below:

While latest single Still Moving Colour again shows their ability to write catchy, engaging rock, beginning slowly then exploding into a big vocal-led chorus that sparks a rise in intensity. Check it out in the video below:

But, as Zakk alludes to, there’s a heavier side to the band that comes across in Exit Route, the first single from their upcoming new EP. It opens up with a fast-paced driving riff that drops into a cool opening verse that launches into a faster delivery of vocals, then a big singalong chorus of “Say it like you mean it, I don’t wanna believe, And I just wanna breath.” It’s fast-paced, energetic and lively rock that’ll make you want to shout your head off, check it out in the video below:

Zakk tells us he’s grown up on and still mainly listens to the likes of The Pixies, Nirvana, Sonic Youth, and the band are all huge fans of Nothing But Thieves. And in terms of lyrics, he tells us they try to keep it as real as possible: “We try to avoid writing about cliche shit like ‘love,’ we try to write stuff that’s real, whether that be a certain story one of us has, or a time in our life we have lived, or something that we felt. As a lyricist, I try to avoid telling people what my lyrics are about and what the meaning because I wouldn’t want to hinder an audience perspective on my work. I like mystery and I think words resonate more to people if they connect it with their own story.”

The evolution of the TrueHeights sound comes with the release of Days We Found on 6 April. Zakk told us: “We cannot wait to release it! Some of these songs on Days We Found were written a couple of years ago and we have held them back for this release.  I think the new EP really shows what we can do as a band now and how we have grown.”

Not resting on their laurels, the band are already busy working on new music. Zakk says: “We are already writing our next record. After not releasing any new music for so long we have the real hunger to win new fans over and writing a record is always great fun because it gives us the opportunity to take our music in new directions.”

You can see the band for yourselves at Thousand Island, formerly the Upstairs at The Garage in Highbury, on Sunday (18 March) alongside our pals in Defences. Tickets are available here, and a full list of their upcoming gigs is here. Zakk told us: “Playing live is where our creation really comes to life. We write every single record tailored to how it would feel live as opposed to how it would sound on record. We can’t wait to be on the road again!”

Away from the music they’re keen to impress their sense of fun, as Zakk says: “Contrary to our music being dramatic and serious, we are actually the biggest bunch of idiots (probably ever!). We try to keep on top of our vlogging on social media so people can see some of the ridiculous situations we often find ourselves in on tour, so if you’re ever in need of a giggle and want to feel better about yourself then check it out!”