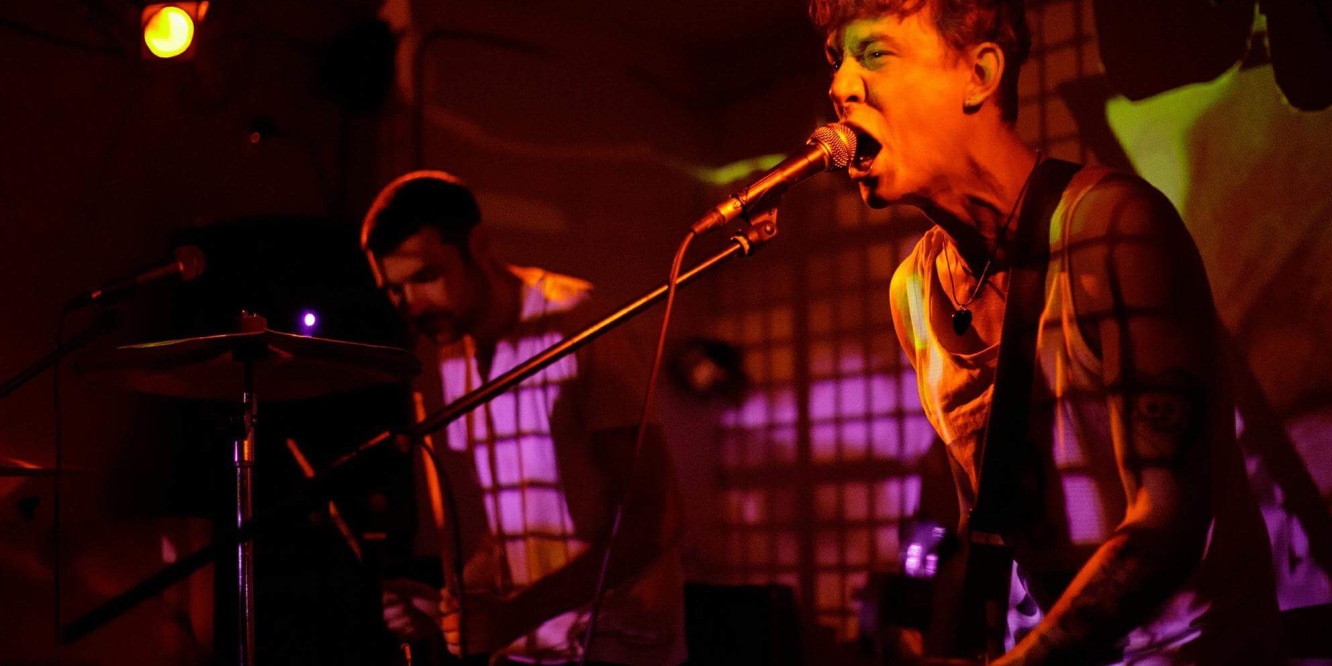 Imagine two guys who spend their time acting like fools and getting drunk together then, during one of those boozy conversations listening to one of their favourite bands, decide to make music together and you have Liverpool duo Crapsons down to a T.

The pairing of Markey (bass and vocals) and Gilbert (drums and vocals), whose manager according to Facebook is Krystian from Salt The Snail, who we introduced you to yesterday, kicked off last year after a session listening to a fellow fun British band.

As Markey tells us: “We’ve been mates for years. We basically spend our time together acting like idiots and being silly. Now we’ve put it into the form of music.

“We had a drunken conversation in the pub three years ago. At the time we were listening to a lot of Pulled Apart By Horses (we still do) and we thought it’d be funny to start a band called Crapsons, named after one of their songs. We tweeted PABH there and then, and they responded giving us their blessing so we thought we had to start it now, albeit three years later.”

Building on that further, Markey gave us a bit of insight into what gets the Crapsons pairing going and what inspires their music. He said: “When we started this project we agreed to write songs about anything and everything and see what worked. I think now that the pair of us have wives and families of our own, to write songs about breakups and chasing girls is definitely passe.

“So we want to sing about everyday topics, like when your biscuit falls into your cup of tea. Any everyday life topics that either make us happy or annoy us, we try and write down and turn it into a song. Some have been awful and are now forgotten about, other times we make each other laugh so much with the nonsense we’ve come up with. We want the band to be fun and this is what’s making it so fun.”

As a result, they’ve honed a brand of music that balances daftness in equal measure with energy and loudness. You could kind of think of them as a sillier, bassier version of Slaves.

This all comes across in most recent single You Don’t Know When You’re Going To Die, of which the song title alone says a lot. It opens with a repeating bassline that’s soon joined by drums and continues through a shouty almost spoken-sung verse: “I’ve missed the bus, I’ve gone berserk, It’s freezing cold, And I’m late for work, My boss is a blurt. Not this again, I hate my life, She’s not text back, How am I going to survive?, At least you’re alive!” then repeated cries of “You don’t know when you’re gonna die.”

The funky repeated bass continues through the second verse: “I don’t feel valued, You’re so corrupt, I’ve bit my tongue, She’s too abrupt, And I can’t get it up. I’ve spilt my drink , I’ve got an itch, This constant nagging, My wife’s… a nice girl actually, Goodbye.” A repeat of the chorus cry sees the bass drop out leaving just the drums, then a fast-paced fuzzy bass note repeats under four rounds of: “I’m angry, I’m horny, I’m stupid, I’m lazy, Pathetic, Flirtatious, And a little bit crazy” then a wild cry of “Crazy” feeds into a return of the original bassline and a last repeat of the chorus line.

On their sound, Markey adds: “We’re good friends with Nige Blackwell of Half Man Half Biscuit and I think he has been a big influence on us. Yes, our style is similar to the likes of Slaves and Royal Blood, but our laidback style, our unprofessionalism and our songwriting style I’d say are inspired by Half Man Half Biscuit. It was Nigel who once said to me ‘don’t write about love, write about the cricket’ – although we haven’t written a song about cricket, I completely took his point on board.”

Crapsons are trying to get themselves heard around the UK, on top of playing in their hometown. As Markey explains: “We love playing in Liverpool, we always have a crazy crowd at our gigs but to get to the next level we want to start gigging  more around the UK. We’re piecing it together so hopefully, some more news to come! In the meantime, we have a very exciting tour booked with Lost Avenue in Northern Ireland which is massive for us, as well as some exciting local dates supporting Mouses, and at Liverpool Calling Festival.”

That Mouses gig is TONIGHT (12 April) at EBGBS in Liverpool, so get yourself down there or get a ticket here. Then the Northern Ireland tour kicks off in Londonderry on 24 May, more info on all their upcoming gigs is here. They also hope to have an EP at the end of the year, once they’ve figured how to do it.

And it sounds like a Crapsons show would be a lot of fun, as Markey tells us: “If you haven’t seen us live, please do! Not just because we want more people at our gigs, but we promise a great time. We put our heart and soul into making each show different, funny and entertaining. If you don’t like our music – fine, but I promise you’ll find us entertaining on stage. We’ve had cookie monsters on stage, beer and biscuits flung about, moshpits and crowd-surfing. Our good friend said to us after our last gig ‘I love coming to your gigs, we all just show up and act like we’re 12’ – that quote is spot on.”

One Reply to “Introducing: Crapsons”