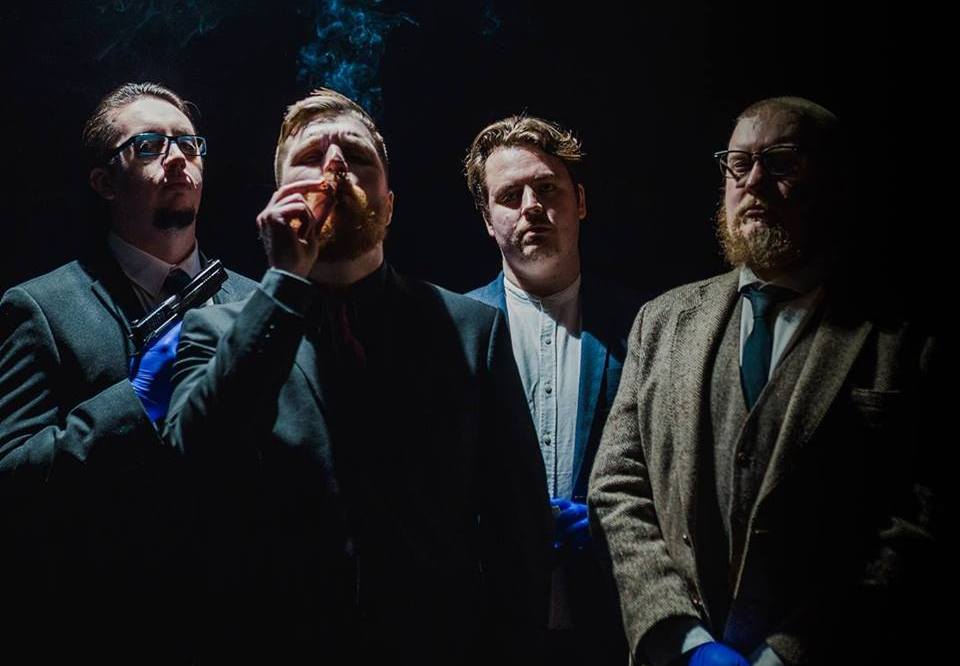 Hull tech metal quartet Dividium are quite the metal melting pot, fusing huge mathy guitars and delicious solos with a kaleidoscope of vocal offerings, from classic metal vocals through to intense screams.

Dividium began life as a project between vocalist Neil Bailey and guitarist Peter Delaney, who later added drummer James Coggin and bassist Joel Haslam to the mix in December 2016. As Neil tells us: “Since James and Joe joined, the band has gone from strength to strength and it feels like we’re the band we should have been when we first started. They’ve brought an amazing skill set and attitude to the band and Dividium finally feels complete.”

What you don’t get from Dividium is the traditional stereotype of a metal band. As Neil puts it: “We’ve never tried to pretend to be a band full of tough metallers or virtuosos showing off as that’s not who we are. We’re just a bunch of nerds who love music, games and films and we pour this into our music.”

They’ve honed a sound that they describe to us as ‘powerful, honest and fun’ inspired by a whole range of influences, from Rush through to Protest The Hero to Green Day and Less Than Jake. As Neil explains: “We’ve always tried to write for the song, as opposed to trying to fit into a particular niche. This sometimes leads to us having a pretty varied selection of songs. However, if we had to narrow it down, I’d feel confident in saying energetic riffs with catchy choruses and sing along vocal lines.

“We’re huge fans of bands such as Queen and you can hear this in our use of harmony and (hopefully) memorable vocal lines. We try to write songs that the listener can relate to, finding some comfort or understanding in the song content and delivery. I’d like to think we were an exciting band that challenges the listener; not by punishing them, but by engaging them.”

The latest offering of this sound is their new EP T.H.R.E.E, which was released on Friday (1 June), as briefly featured in our first New Music Friday round-up last week.

It opens up with the brilliantly titled Send Nudes, which starts off with a light guitar lick that continues under powerful chords, before a bouncy tech-metal riff kicks in and continues through the opening verse. A chorus of “The pieces of you, Are not what we knew, You threw it all and let me to fall into her arms, And never let me know, You never let me know” sees things become a little more melodic before a huge cry of “Go” beckons the big bouncy riff back in. The second chorus is followed by a huge winding guitar solo that ends on a piercingly high note that gives way to a final chorus. Check it out in the video below:

There’s a more intense beginning to Would You Kindly? with a mass of screamed vocals and wild blasts of guitar. It becomes a little more melodic in a chorus lead by Neil’s engaging vocals, jumping back into the huge guitars alongside intense screamed vocals. The second chorus gives way to a huge smash of looping guitars and driving drums, which develops into winding guitar melodies.

That’s followed by latest single Satisfaction Guaranteed, which opens up with cool repeating guitar riff then a lively opening verse of catchy vocals driven forward by fast-paced drums. That jumps into a pre-chorus of more laid-back vocals “My heart’s laid out for all to see, The chaos trapped within leaves me breathing easily, The air feels cold tonight under dead starlight, Fighting for my existence in the dark” with really cool guitars flying around in the background. That drops straight into a big singalong chorus of “I’m never on my own, A moment’s all that’s needed for a spark to start a flame, But so much more has slipped away, Attrition never bothered me before.” Check it out in the video below:

The intensity increases on Nerfed, which launches straight into a mass of screamed vocals, huge guitars and rolling drums, then a really heavy section of vocals “I spread fear, I spread pain, I spread loathing, It’s coursing through my veins” before dropping into a more laid-back chorus. There’s an awesome extended guitar solo mid-way through too and takes us through to a repeat of the more melodic chorus.

The Echo Chamber also starts at full pelt, diving into a blitz of screamed vocals “You’re living a lie, Empty inside, hidden behind the veil of your anonymity, A welcomed respite from the failures in life, Dead stares at words on a screen, You’re buried alive writhing in jealousy, close to your heart, Save your souls.” It then drops down into a more laid-back, drawn-out vocals with repeating fast-paced guitars supporting, and building gradually towards a powerful chorus followed by a blast of big guitar chords. Those same chords return later, then drop into a piano lick under really chilled out vocals, then building into an epic outro. The mix of tempos and styles throughout makes this a really engaging listen.

The EP closes with its longest track, the six-minute-plus Body Harvest, which opens up with fluttery guitars then big chords kick in and give way to a mini solo and return with interest in a blast of metal goodness. A laid-back verse kicks in but is quickly replaced by huge screamed vocals and ascending guitars that feed into a big singalong chorus of “I’ve wasted my time, Wasted on loving you, It was in the background long before, Words they come and memories repeat within my mind, I wasted all this time” followed by a blast of bouncy guitars. It repeats, followed by a huge guitar solo supported by chugging guitar chords then drops into a final chorus, before ending the EP with big tech metally guitars.

On the EP, Neil told us: “We’ve worked really hard on trying to hone our sound and produce the best music we can. We’re just hoping that people are as excited about it as we are about them hearing it. There’s a little bit of something for everybody, whether you’re into heavy riffs, clean vocals, screams, harmonies… whatever you look for in a record. Personally, with this EP, I’ve tried to write about things lyrically that people can relate to; communicating with our audience effectively is one of our biggest aims when crafting our music.

“I like to think it will appeal to a wider audience; whether you’re a new fan or somebody who’s been with us since the beginning, you’ll find something you like. I think this record sounds much more mature than previous releases and we’ve pushed ourselves really hard to be the best we can at this moment in time.”

And in terms of what inspires them to write, Neil continues: “I’d say our influences are whatever is relevant or important to us at the time. I base a lot of my lyrics about things that have happened to me personally, or things that have happened to people I’m close to. I also write a lot of songs around media, such as gaming and literature, as we’re all huge fans of anything like that. I’ve never felt the urge to write songs about larger scale problems, such as politics or religion, and I’d feel like a fraud pretending I had more than a moderate understanding of these subjects.

“As a band, we’ve always loved the idea of concept albums; albums such as Metropolis Part 2 by Dream Theater and Machina/The Machines of God by Smashing Pumpkins were some of my personal favourites, and I’ve tried to incorporate my own ideas into previous albums. I became really interested in the idea of epiphanies, so I put a lot of thought into how I could use this on T.H.R.E.E, and I think some of the best songs on the EP were written using this as a base.”

There’s plenty more to come from Dividium with a long list of gigs already booked in and more waiting to be announced and playing some great independent festivals, including ProgMetalMadness 3 in August. They’ll also be going into the study to record a live version of one of the tracks from the EP, while Neil tells us they’ve been working hard on videos to support it and have storyboarded a ‘pretty intense storyline’ that plays out across the six tracks.