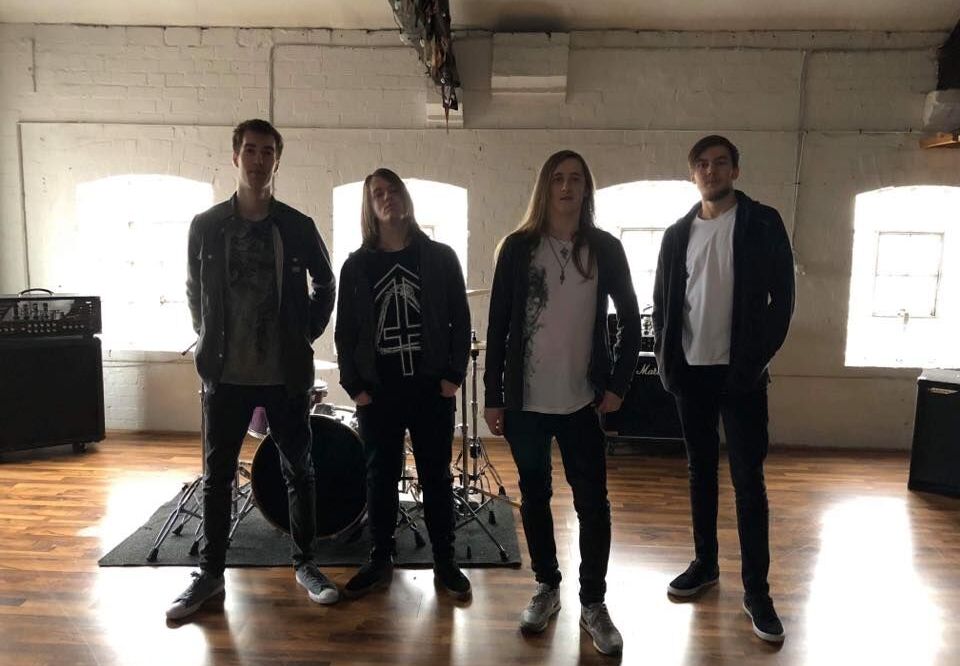 To paraphrase the old Ronseal TV adverts (for those of you of a certain age), The Forgotten Age does exactly what it says on the tin – a throwback to the good old days of metal. In their words: “The kind of music your teenage self would want to play to impress their friends, but beyond that, it captures the band’s personalities and musical style perfectly.”

The Bangor, North Wales, outfit first started as a five-piece back in 2014 when Alex Wynne (bass and screamed vocals) and Ben Jones (guitar) started jamming with their former lead guitarist, who then introduced them to Mike Bassington: (vocals and guitar), along with a friend on drums. 18 months later they parted ways with the original guitarist and drummer for the current line-up, completed by Jack Hawley on drums.

They’ve honed an engaging melodic metal sound that combines powerful vocals with exciting prog-infused riffs and solos. As they describe it: “Melodic guitars, complemented with groovy/punchy drums, power metal inspired vocals and a clean thick bass sound to round it all off.”

Paradigm kicks off with low chugging chords countered by high-pitched guitar then synthy bursts in a gradually building intro to Faith. Laid-back vocals enter, then a cool guitar lick leads into a fun singalong verse with big vocals. A huge cry leads into big chuggy guitars before dropping down into another laid-back verse with almost creepy guitars in support, then big screamed vocals take us into another chorus. That’s followed by a big guitar solo followed by a jumpy guitar riff that continues under energetic vocals that lead into a final chorus.

Next, Remember is a classic metal epic. It opens up with a delicious guitar riff then chugging chords under laid-back vocals. Then a huge burst of screamed vocals give way to singalong vocals played off against more screams as a chorus ends on the line “Remember this night” before giving way to another funky guitar riff. The second chorus gives way to a couple of awesome winding solos that drop into a barrage of screamed vocals that feed into a final chorus.

That’s followed by the EP’s lead single Relent, which opens up with a cool guitar lick then delicious vocals “I’ve been waiting for the world to change my ways… I’ve been waiting for the shore to reach me, To pull me under and I won’t let you drown” over chugging chords that end on really fun melodic bursts. It builds into more intense vocals, then a cool high-pitched solo over a supporting riff that continues into another powerful verse and chorus. A laid-back guitar lick follows, then dives back into the chorus before ending with a smash of awesome driving guitar riffs.

The EP closes with title track Paradigm, which opens with the kind of metal riff that is every headbangers’ dream. Low vocals “I welcome you into my fictional lie, To share the sentiment of my shame, You may receive a false depiction of fame, While I know that I am not the first” then the vocals intensify impressively as big diving guitars kick in. Screamed vocals come in icer low chugging guitar chords, then bursts of chords followed by fast-paced licks in a really fun mash-up section. Big vocals follow in a final chorus then a big smash of chords to bring the EP to a suitably powerful ending.

On the EP, the band told us: “We’re incredibly excited for people to hear our new EP. A lot of hard work has gone into making this our best yet, and we really think people will enjoy it. The riffs are chunky, the drums are punchy, the vocals are full of power and you’re guaranteed to get at least one of those choruses stuck in your head. In short, it’s four epic tracks full of emotion, with a real heart and soul of old school metalcore, and we really hope you guys love it as much as we do.”

Inspired by the likes of Bullet For My Valentine and Avenged Sevenfold, through to the likes of more symphonic groups like Nightwish and Sonata Arctica, the Welsh metallers have honed their own highly enjoyable brand of powerful yet melodic metal.

And on what inspires their music, they tell us: “A lot of the stuff we write about is quite personal, drawing on past events, emotions and moments that were really significant to our lives. One of the most common themes so far is relationships, the challenges one might face, and a tribute to the dedication and sometimes sheer perseverance it takes to keep a relationship healthy, romantic or otherwise, from the darker themes of Faith, to the more light-hearted Remember.

“Paradigm as an EP is a little more than that though, it’s about finding ways to break free of the mundane and take yourself to new heights, challenging the ways not only people see you, but the ways in which you see yourself, and the things most precious to you.”

The band is focused on writing new music while being on the lookout for a full-time gigging drummer to play tours to support the EP. They’re also keen to hear of any possible support slots, so hit them up.