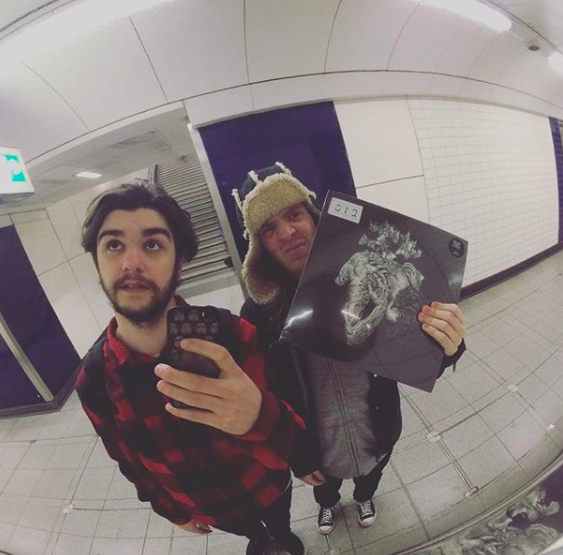 A few months back we saw a two-piece barrage of big metal noise open up proceedings for our pals in Defences. The London-based duo of Harry and Will together form Death Goals, a chaotic heavy metal sound that they describe as ‘Two Bois Making Noise’ – a tagline that accurately portrays their brand of loud, noisy, chaotic madness.

The pair first formed in April 2017 while attending the same university and Harry’s old band was finishing up. As he explains: “I wanted to form a crazy hardcore band, and I knew Will was into that kinda vibe, so I jumped on him and we’ve been happily married ever since.”

Despite lacking the remainder of what might traditionally be considered a band, Death Goals more than make up for it in their sound, which they describe in adjectives ranging from “Angst, shitposting, aesthetic” (Will) to “Frantic, emotional, mess” (Harry). And Harry adds: “I mean for us it makes life so much easier in regards to booking shows or rehearsals. However writing can be a pain when we’re not clicking together or we don’t see eye to eye on an idea. That is a pain.”

They’ve taken their manic, ferociously screamy, riffy live show and fine-tuned it into a debut six-track self-titled EP packed with wild screams and delicious guitar madness, inspired by the likes of The Dillinger Escape Plan, Heck, The Chariot and Every Time I Die.

It kicks off with a noise-filled opening track then bursts into life with Paper Cuts For Kids, which opens up with wild high-pitched guitars then huge screamed vocals

A clip from The Mighty Boosh – about finding a note between B and C – follows to introduce the brilliantly titled Staceyletmeseeyourstegosaurus, which is a short and not particularly sweet mass of driving guitars and screams. Check it out in the video below:

Next, That’s A Gold Hat, Cool Cat opens up with cool high-pitched guitars that drop into a screamed verse over drawn-out guitars, then a wild riff takes over with throat-destroying screams in the background. A driving low tuned blitz of chords and pounding cymbals brings a strangely engaging track to an end.

Those Closest to You Hold the Sharp Knives opens up with guitar noise, a drumbeat picks up the tempo then a huge cry of “You fucking creep” accompanies big booming high guitar notes. It’s fast-paced and frenetic, with chugging low-tuned chords followed by a variety of blasts of high notes, then drops into a really fun section of low-tuned guitars followed by big bent high notes to close the track out.

Final track Trendy Modern Wankers opens up with a spoken section from The Mighty Boosh “I hate you trendy modern wankers and everything you represent,” then dives into a mass of rolling guitar riffs and pounding drums. Huge screams and relentless drums kick on then stabby guitar chords take over with huge death metal drums supporting. Another wild rolling riff returns then big chords followed by more high pitched guitars to bring the EP to a fitting ending.

There’s plenty of fun, energetic guitar, pounding drums and screaminess to dig your teeth into on this debut, and we love what we hear. On the EP, Harry tells us: “If you’ve seen us live then you’ll know what to expect from the EP, we tried to capture the energy and chaos of our live show on the EP and I think we did a pretty good job of doing so.

While Will adds: “We’re pretty stoked, we’ve been playing some of these songs since our first show, and Trendy Modern Wankers was the first song we ever wrote, so it’s great to finally have these songs recorded.

And on their lyrical influences, Harry tells us: “A varied mix of stuff, a lot of the songs are kinda teen angst girl problem stuff. Stacy is about the fear that I’m running out of time to achieve all my goals and stuff, and Those Closest….is about all the Harvey Weinstein (stuff) and the situations that are surrounding the alternative music scene.”

There’s plenty more to come from Death Goals, including more gigs, some cool music videos and maybe some new songs. Although Harry adds: “Who knows we might just break up after the EP’s released? Which is the punkest move possible!”

Death Goals is out now on Bandcamp and Spotify. And, if you really like it, Will tells us: “If anybody pays over a tenner for the EP, Harry will get their name tattooed.”