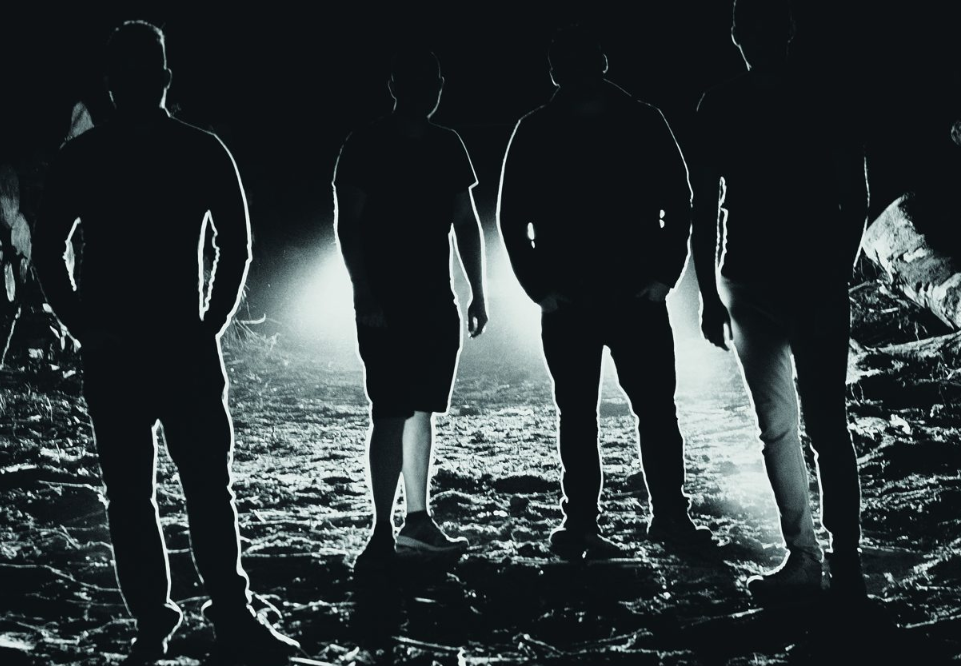 We recently introduced you to the grungey, raw rock sound of Cardiff rockers Dead At 27, and we’re delighted to bring you a review of their debut album Bring In The Lights, which is out now.

The quartet of Nathan Gratton-Smith (vocals and guitar), Dave ‘Griff’ Griffiths (guitar), Mitchell Casey (vocals and bass) and Chris Lerwell (drums) began the process of creating the album back in November, when they recorded five songs with Sam Dyson at Free House Studios in Bristol. They originally planned to release one as a music video, then an EP in early 2018, but the recording process inspired something more.

As Griff explains: “Five days into the studio we’d dusted off five full songs, so we thought to ourselves why not release five more – with some gentle persuasion from Sam. We had already released our first EP and had material for further songs so that’s what we did. We went back into the studio in March with five more songs that brought Bring in the Lights together.

“We are four guys who love making music and our writing process is simple: Someone brings an idea, riff or song to the table; we jam acoustically; then work on arrangements full band and write vocal melodies or guitar melodies after the bones of the song is complete.”

On the album, guitarist Griff told us: “It feels like a very long time coming! We are incredibly excited for people to hear what we’ve been working on for nearly a year. We had such a fantastic response from our first single Lights it blew us away, the video received 12K views on Facebook and hundreds of comments, likes and shares. It was brilliant and really helped spur us on to produce the full album and get it right.

“People should expect to hear from a balanced mix of heavy hard rock riffs, powerful lead vocal lines, fast-paced drum and bass arrangements, but also more melodic parts from vocals and guitars. Something we wanted to make sure of was build up and impact of choruses and pace of verses, we think we’ve achieved this and we hope everyone else does as well.”

The album opens up with a low chuggy guitar riff under Nathan’s trademark gruff vocals in the intro to opening track Mud. It kicks into life with a more strained cry of “I’m so alive, This time, You ain’t tricking me with lies” then a little run of low riff continues into a big smash of guitars and drums. Driving drums make this an enjoyable opener, while there’s a cool bridge of repeating guitar riff that continues under a wild high-pitched solo. Check it out in the video below:

Next, 1994 takes us back 24 years to the death of a rock legend. As revealed when we made them our New Band of the Week back in April, the band’s name offers a nod to Kurt Cobain and this particular track is built around the events of the Nirvana frontman’s suicide. It opens up with a smash of drums then a big looping riff and smashes of cymbals that drop down into a verse that ends on a big cry of “Take me back to ’94” that feeds into a big singalong chorus.

Miles Away Pt. 1 opens up with a long a capella vocal section: “I could sit here in the rain all day just to hear you laughing, Time is slipping away, Away from me, It just seems to get harder, Standing dreaming of the end of the road, waiting for the day when I get to hold you again, And I’d give my life for another day to see you again, And I’ll stay tonight living with these dreams inside my head, A million miles away” that gives way to a big smash of guitars. Wilder vocals kick in over a backdrop of booming riffs and high-pitched guitar blitzes, continuing over Nathan’s cries of “A million miles away.”

That’s followed by their fantastic debut single Lights, which was released back in January. It opens up with a couple of cymbal hits, a burst of guitar, a pause, another burst of guitar then an opening verse that begins fairly innocuously. But a raw throaty scream sees the song explode into life. Pounding drums and heavy guitar chords support heavy screams that end on “Turn on the lights so I can see.” The chorus is followed by a lone guitar riff, then a guitar slide brings in a mass of guitar chords before dropping into a more mellow verse that gradually builds towards another big hard-hitting chorus. Check it out in the video below:

The hard-hitting rocky goodness just keeps on coming, with the lively Give It Up a particular standout track with opening cymbal hits drop into lingering guitar chords then a wild romp of an opening verse and a big chorus.

While the album ends as it starts with final track Freak beginning with some odd noises, then a big cry of “Nah nah nah nah” over chuggy riffs then dropping into vocals supported by a low-tuned riff. It explodes into life in a wild chorus that ends on the cool “Nah nah nah nah” vocals. There’s a big smash of guitar riffs over wild screams, then it drops down into a flickering guitar sound that gives way to one final blast of grungey noise.

The Dead at 27 sound is dominated by Nathan’s distinctive vocal delivery and all manner of delicious grungey riffs, which are particularly prevalent in the delicious Envy. But their lyrical influences of are really intriguing and far from your run of the mill topics.

Griff tells us: “Nathan’s writing process for the vocals and song themes are based around fictional incidents as opposed to actual experiences. They are messed up stories and are intended to paint a picture of a situation or scene, most of which no one would want to find themselves involved in and, for some of the tracks, are very dark in nature.

“For example, You’re Not Getting Up From This is based on a husband returning home to find his wife in bed with another man – it takes a turn for the worse with the decision the man takes. The way we see it as a band is that Nathan either needs to talk to a therapist or is a lyrical genius…”

While Griff also tells us the process of creating an album took the band a little by surprise. As he explains: “We were all taken back by the amount of work that goes into making an album, from the physical recording of it and getting the mixes and masters right to photoshoots, music videos, album artwork and the admin behind all of that – it’s crazy.

“But we have worked with some fantastic people – special mentions to Sam Dyson who is a complete gentleman and made our entire recording process a breeze, Simon Kitts for the work on mastering the tracks, Mei Lewis and Tom Hughes (and team) for directing and shooting our two music videos. And finally Gareth and Geraint from OCW Studios for the time they have taken on photoshoots and working on the artwork for the album.”