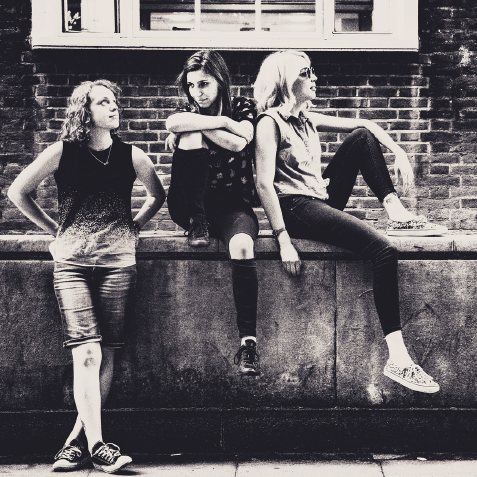 The first thing I noticed about London-based trio BERRIES was the distinctive voice of lead vocalist Holly, who sounds more than similar to Jack Off Jill frontwoman Jessicka Addams. Not content with that alone, the band have honed an engaging, punchy rock sound that’s filled with delicious melodies and naughty fuzzy riffs, which they describe to us as “Energetic riff driven rock with a dash of hair.”

The band was first formed through Holly (guitar and vocals) and Lauren (bass), who grew up together in Norfolk, played in different bands on the same bills and jammed through their shared musical influences like Jimi Hendrix, Red Hot Chili Peppers and The Subways. But they didn’t get around to starting a band together until they moved to London and met Lucie (drums) who, in their words, “totally got the style straight away.”

As Holly explains: “It’s always great playing with musicians who appreciate the same things in a song and it makes the writing process really exciting. You always know Lauren will try and throw in some big fuzzy breakdown, which we love, and Lucie’s influences usually take the song somewhere else totally so it’s always fun to bounce off each other.”

The band released latest single Discreetly last week, which showcases the delicious rocky BERRIES sound. It opens up with a cool little looping guitar riff that’s joined by Holly’s vocals “Just hold your brittle bones ’til your body shakes them loose from warmth” – from which I’m sure you’ll get the Addams reference. The pace builds in a pre-chorus of more intense guitars and more edgy vocals “Mistaken to raise alarm, I know you’re not in any harm,” then bursts into a chorus of engaging vocals that end in the line “Erase the trace with a spit of doubt.” A second chorus drops into a repeating bassline, then a high-pitched guitar solo feeds into a smash of fuzzy guitar chords as the track ends in a big rock out.

On the track, Holly tells us: “We have quite a few twists and turns going on in Discreetly which we hope people will enjoy. We really worked on trying to recreate the ‘hook’ of the track throughout in different forms and play around with dynamics and harmonies.

“We really love it when songs seem to build effortlessly and so we tried to keep the verses fairly muted and add in layers and play around with different instrumental parts and then at the end it just felt natural to throw in this big crunchy breakdown to finish. So yeah, we hope people like it!”

BERRIES beautifully entwine delicious riffs with Holly’s engaging vocals, as portrayed by previous single Faults, which opens up with a slow guitar lick over a humming bass that continue under a laid-back opening verse. A big cry of “woh-oh” kicks the song into life and a faster riff and driving drums lead into an energetic chorus. A second chorus is followed by cool ascending guitars that drop straight into laid-back vocals, which feed into a rock-out to end again.

While the single before that, Wild Vow, shows the rockier side to the band, filled with catchy fuzzy riffs and culminating in a cool guitar solo that feeds into a big catchy chorus. While if funky riffs are your thing then check out Siren, the opening track from the band’s debut EP Those Funny Things, which I love more every time I listen to it.

In terms of what influences their music, Holly tells us: “It can totally vary, sometimes we write songs about different moods or a feeling rather than an actual topic. Discreetly is definitely an example of that, it’s a track about self-doubt when you refuse to fit into certain ideals and the pretence and resentment that can follow over time.”

From what we’ve heard so far, BERRIES are a band worth getting excited about. Their music is fun, catchy and rocky, while also intricate and delicate, as shown on Never Smiled Once from their debut EP. Above all else, we guarantee you’re going to enjoy listening to this band.

You can see BERRIES for yourself at their single launch party at Birthdays in east London on Thursday (11 October). They’re also playing Bristol, Brighton, London again and Liverpool before heading back into the studio to lay down their next release. More info on their upcoming gigs is here.

You can follow BERRIES on Facebook, Instagram and Twitter, and you can check out their music on Spotify, iTunes and Soundcloud – where you’re free to guess which of their previous releases was described as “When a big purple velvet elephant comes into the room and starts slapping you about a little bit.”