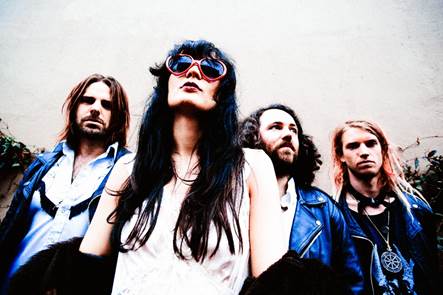 Dripping in fuzzy riffs, intrigue and uber coolness, London’s psychedelic bluesy rock quartet Saint Agnes have been described as “the band Jessica Jones would form,” which says a lot. They recorded their EP on 2″ tape, they’re in the midst of a tour through Eastern Europe, they’ve created photo books and Polaroid images to support their EP. As we said, dripping in coolness.

But the story of how Kitty and Jon formed the band is half cool and inspiring and half, well, a little bit dark. In Kitty’s words: “We’d met at a gig and talked about a plan to make guitar music where the guitars were bold, not buried in FX as a reaction to the shoegaze thing happening at the time in London.

“I had a spare room in Silvertown, in a tiny freezing flat with Jon moving in and sleeping on the floor where we’d drink cheap wine and talk for hours about music and how it made us feel. Real life was pretty grim so we lyrically escaped into a world where the mundane became heroes and villains, gods and devils. Soon we realised to make this a live band we’d need more people and through some unusual coincidences came across Ben and Andy who shared our vision of the band we wished existed.”

They released latest EP The Death or Glory Gang recently on which Jon tells us: “We’re incredibly proud of this EP. It represents exactly where we are as a band now. We are a rock band and at the heart of this is a gang made up for the band and our hardcore fans. We want to share our world with new listeners and those who get it can join us on this ride. It is also important to us not just trying to write good songs, but to put as much physicality into our performances live and on record as possible and I think we captured that here.”

The EP’s title track The Death or Glory Gang fuses big fuzzy riffs with Kitty’s deliciously edgy vocals. Opening up with a funky riff that continues under wild vocals, with repeats of “I am nothing” and “I said cool yourself.” The pace drops down then Kitty’s vocals are left to do their own thing, before diving into a big fuzz-laden rock-out featuring big bursts of guitar and huge vocals. Check it out in the video below:

And the bluesy rock continues on Diablo, Take Me Home. It opens up with a cool guitar lick under dual vocals that end “I worked my body to the soul and I ain’t got a single thing to show, And I’m getting bored, Diablo take me home,” which sees a deliciously chugging riff kick in. Check out the video below:

Final track I Feel Dangerous Around You starts off slower, but soon enough a disgustingly good low-tuned riff sees things ramp up. A chorus of shouty vocals and wild instrumentals suddenly drops into another chilled section, then it gradually builds up to a huge solo. It’s super, super cool.

As mentioned, the band have gone a bit old school with the creation of their EP, in that they recorded it to 2″ tape. Jon said: “Recording to 2″ tape has lots of limitations and we welcome them. Bands have been recorded the same way for a long time now and a standard approach has evolved. It is based around trying to get things done easily and allowing each instrument to be recorded separately so they can be easily edited later. All of this benefit comes at the cost of spontaneity, something we value highly.”

While Kitty adds: “Tracking to tape together in the studio means you can’t fix bum notes or tweak sounds, you just have to decide to live with the take or not. As a result, you have a genuine one-off performance filled with character unique to the band. This was hugely important to us, that is why we produced it and mixed it ourselves. Plus it means you work faster and don’t overthink. Given the luxury of time, we have a tendency to overthink so this forced us to not have that option.”

The Saint Agnes sound is inspired by artists with a vision and create something unique to them. Think Jack White, Janis Joplin, PJ Harvey, Trent Reznor, Ho99o9 and the pure riffyness of Metallica – of whom they tell us Lars is their favourite member – and you’re on the right lines.

And when it comes to what inspires them to write, Kitty explains: “The sheer joy and release you get when jamming as a band and it is all coming together. That feeling is so magical that it keeps inspiring us to do it again and again. We have all individually felt like outsiders and the sense of belonging in a gang is a powerful one. It really does feel like us against the world. Lyrically each song is unique but often tied together by occurring in a similar world of mine and Jon’s creation.”

While Jon adds that a more random inspiration led to him picking up the guitar: “I have wanted to play guitar ever since I saw Marty McFly tear it up at the Enchantment Under The Sea dance in Back To The Future. All of us feel there is something deeper in ourselves that can only be accessed and experienced by playing in a band and losing yourself in the performance. In our own ways we’re all quite private or shy and to re-live stories and emotions through music means we can truly feel them and process them in a way we struggle to in everyday life.”

Their music is oozing in bluesy rock coolness and energy, so we urge you to add some Saint Agnes to your life.