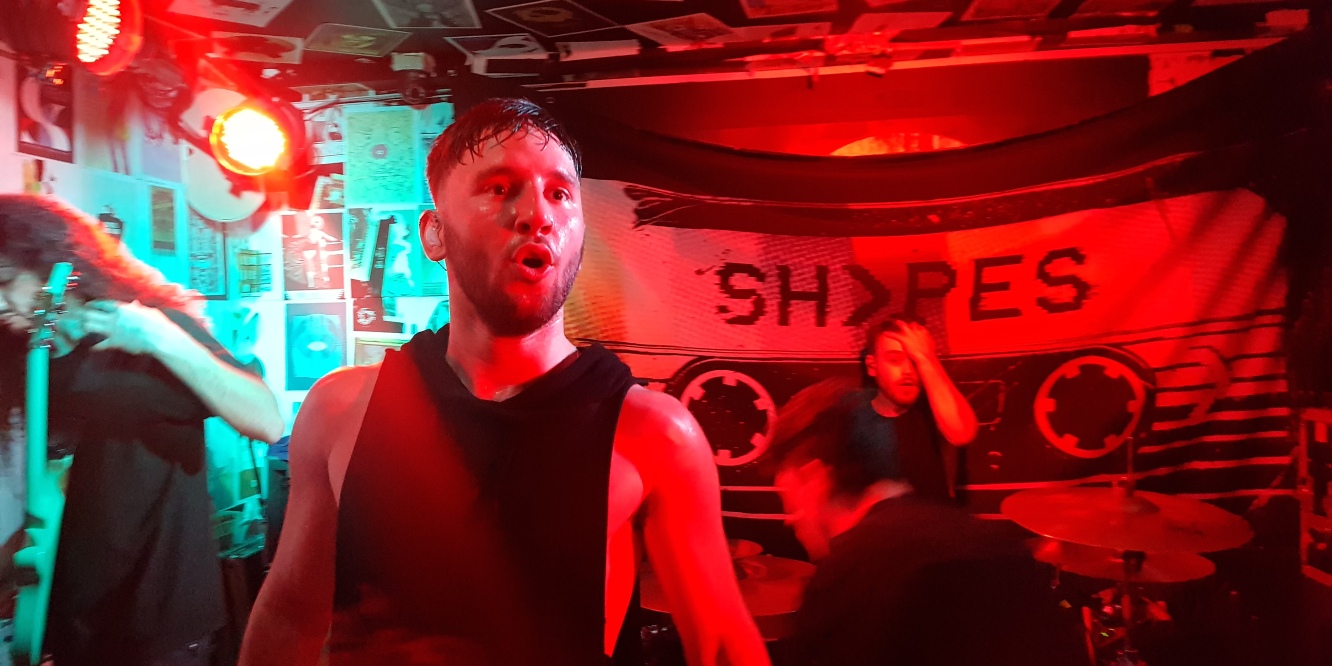 Coming into Saturday night’s gig in Bournemouth I’d had a few words from one song stuck in my head for a few days: “I’ve got this morbid fascination.” So perhaps it was fate that that was the very song that SHVPES chose to open their set with – and what a set it was.

The Birmingham five-piece provided the perfect finishing touch to a line-up of two of our favourite new metal bands, COVE and wars, as well as an exciting local opening act Endea, in a gig that apparently had a one-word band name restriction.

Bournemouth’s Endea kicked things off, with their enigmatic frontman ‘Grimshaw Endea’ providing an entertaining start to the evening. I arrived mid-way through the set – excuse, I was interviewing wars about their new EP – and my first encounter with the band was Grimshaw jumping into the crowd and rocking out while the guitarist launched into a big solo. 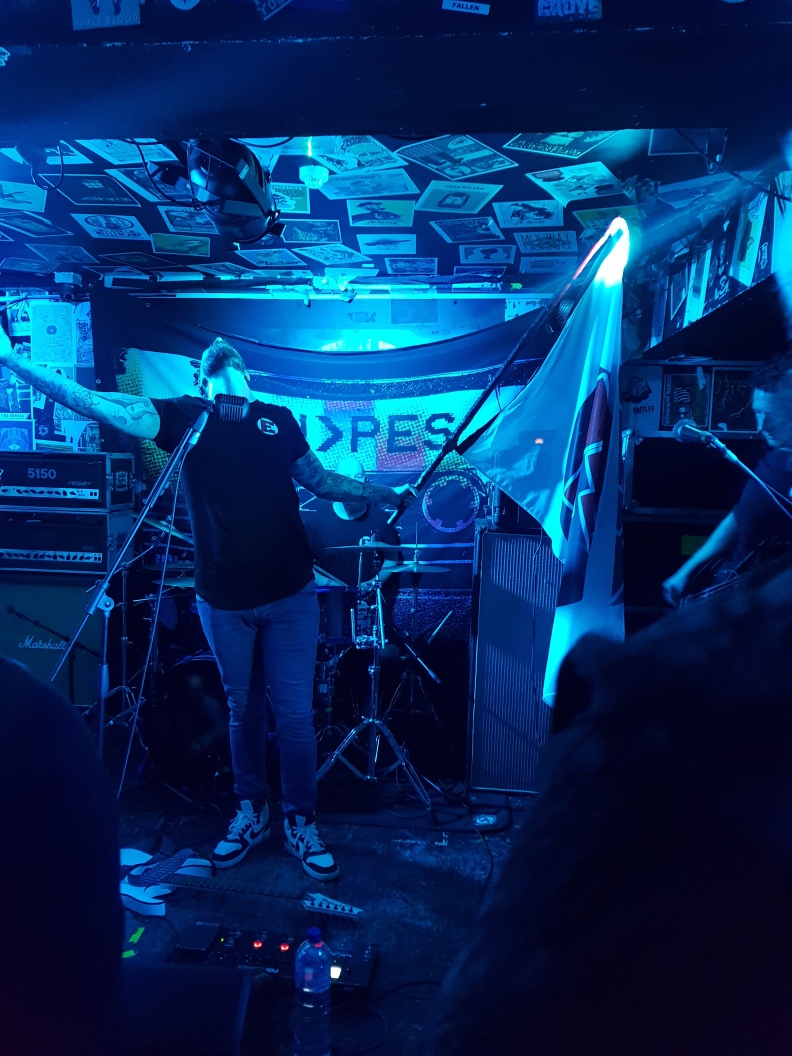 They played Lost In Space, the first single from their upcoming EP (out on 1 December), which had a really cool intro that fed into a big cry of “Lost in space” then a big rockout of heavy guitar riffs. Indeed, the first thing that sprung to mind was ‘Loud,’ whether that’s the band in particular or more the intimate nature of The Anvil as a venue – either way, the band were sounding good.

Next was Breathe, which featured some cool guitar slides by the frontman and ended on a big rock-out alongside a huge solo from the lead guitarist – an ending so heavy I was thinking ‘he’s going to break a string here,’ and it looked like he nearly did.

They closed out with Into Oblivion, the title track of their debut album, which was a little of a singalong track and sounded superb as it crescendoed to the frontman, guitarist and bassist all singing at the end. Grimshaw – who had several times bemoaned the crowd not being loud enough, except for when he mentioned beer – got the audience joining in with the cries of “Into Oblivion” in a strong ending to their set.

And if that was loud, then the decibels were only about to increase, as next up were Rugby’s wars. Their set opened up with a pulsing reverby noise as the lights went out on stage, and gradually creeped into Little Death, the first track to be released from their second EP, which is out in January. A long intro section of screamed vocals from frontman Rob Vicars eventually dropped into chilled vocals from clean vocalist Sam Barnard, gradually building towards more screamed vocals that lead into the big singalong chorus.

They then jumped back to a track from their debut EP, which sounded simply huge, then the debut album as they played my personal favourite wars track Salt Flat Sailing, with piercing guitars over Rob’s vocals then dropping down into the deliciously catchy chorus. Meanwhile, was Rob doing his usual antics of moving the microphone around and carrying the mic stand all over the stage with him. 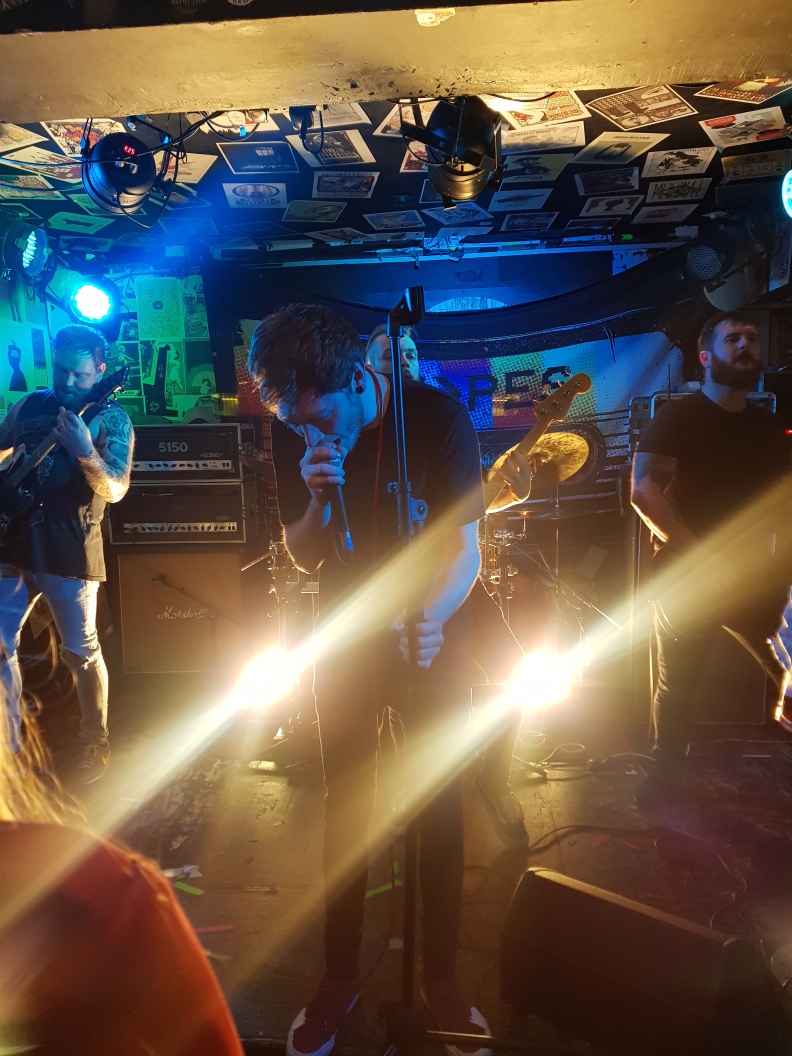 Next up was latest single In A Mirror, Dimly, with the cowbell smashes in the intro that I love coming to the fore before diving into a jumpy guitar riff, then a lively chorus of the singalong “We stare into mirrors” vocals.

And that was followed by a brand new one Scorn and Fidelity, which will be released shortly before the new EP. Our first listen hints at a slight evolution of the wars sound, opening with synthy sounds then a big screamed intro over high-pitched guitars pounding away alongside driving guitars and bass. A prolonged singalong section followed, then a huge metal breakdown of drawn-out guitars and doomy cymbal smashes as Rob’s vocals kick back in. Suddenly everything dropped out bar a low guitar riff before diving back into the singalong chorus. Everything we’ve heard from the new EP so far suggests great things, and this track is no different.

wars closed out by returning to the album’s opening track The Art of Not Knowing, with huge screams from Rob countered by the engaging singalong choruses of “She said how can we know what is right, When we live only one life at a time.” Rob then did his trademark jump into the crowd and fall to the floor, before getting up and swirling the microphone over the light at the front of the stage. Yet another impressive show from the lads, and we’re very excited about what’s coming our way in the new EP – and you’ll read about it here shortly before it’s released.

There was somewhat of a surprise as Kent’s COVE took to the stage, in that they had a new frontman from the last time I saw them. The new guy, Harvey Freeman – or maybe he’s not new, because I think he was in the video for Buried, so now I’m just really confused – impressed, delivering a powerful, energetic performance of huge vocals and dashes into the crowd.

They opened up with Coincide:Collide, gradually building up with a big smash of guitars, clean vocals from the guitarist, then the huge vocals kicked in. That was followed by the ridiculously good Buried, from the band’s debut EP, with its crushing riff dominating under huge screams. Then the intense All I Believe opened with huge guitars, drops into laid-back vocals before Harvey’s huge screamed vocals take over.

Next, An Honour took the levels of savageness up a notch, with an eerie little intro giving way to an almighty smash of huge guitars and screamed vocals, before the huge cry of “And when you shut your eyes to sleep, They’ll scream remember me, remember me.”

The superb Solis followed, keeping the fast pace up with awesome driving guitar riffs under Harvey’s huge vocals. It was an equally impressive set from Cove, who were at their deliciously crushingly heavy best.

And they closed out with Reflect:Resolve, which opened up hard and heavy with big riffs and intense vocals then big riffage took over, ahead of big piercing guitars to bring the set to an atmospheric ending.

But if the gig had been good so far, then it was about to go into overdrive as SHVPES took the stage. As referenced above, they opened up with Undertones and it’s first verse line “I’ve got a morbid fascination, I’m a slave every god-damn minute ’til you’re done” dropping into a big singalong chorus.

SHVPES really got the crowd going with their intense energy, and frontman Griffin Dickinson fuelling circle pits and moshing – to the point that Griff had to get a young kid at the very front out of the crowd to keep him safe.

Afterlife was a particular highlight of the set, with the crowd bouncing up and down and singing along to the “Woh-oh-oh” opening vocals, then the huge singalong chorus. State of Mine also got the crowd going with its raw energy and disgustingly good pounding riff, then another big singalong chorus. 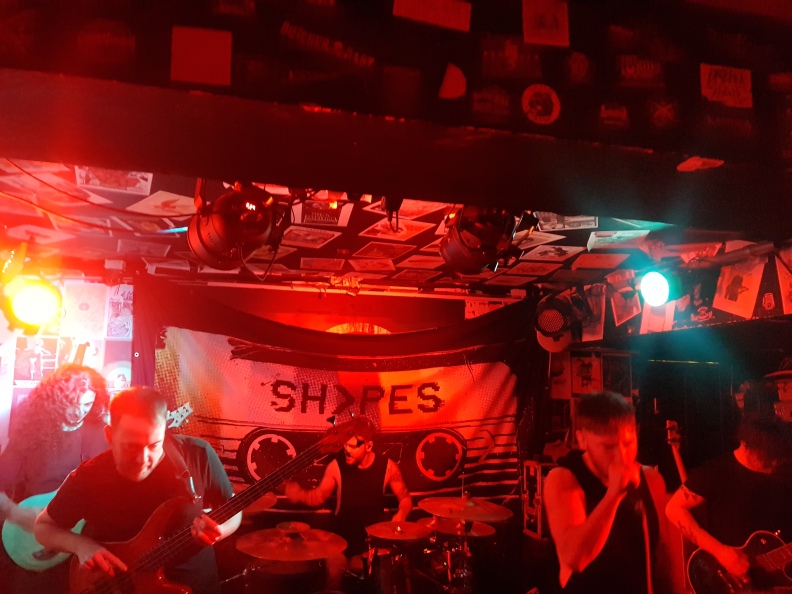 SHVPES closed out with their new album’s opening track Calloused Hands, with another huge riff sparking chaos in the moshpit. At the end of the track, Griff got the crowd to split into two, walked into the middle, kicked into the chorus and swiftly bolted back onto the stage as the crowd merged and kicked off.

This was a fantastic gig showcasing three bands right at the very top of the UK’s exciting metal scene. If you’ve never experienced SHVPES live then I fully recommend you do so, I’ve seen them twice and they’ve been fantastic both times. And wars and COVE are right up there with them, providing a brilliant show with able support from another exciting new band Endea.