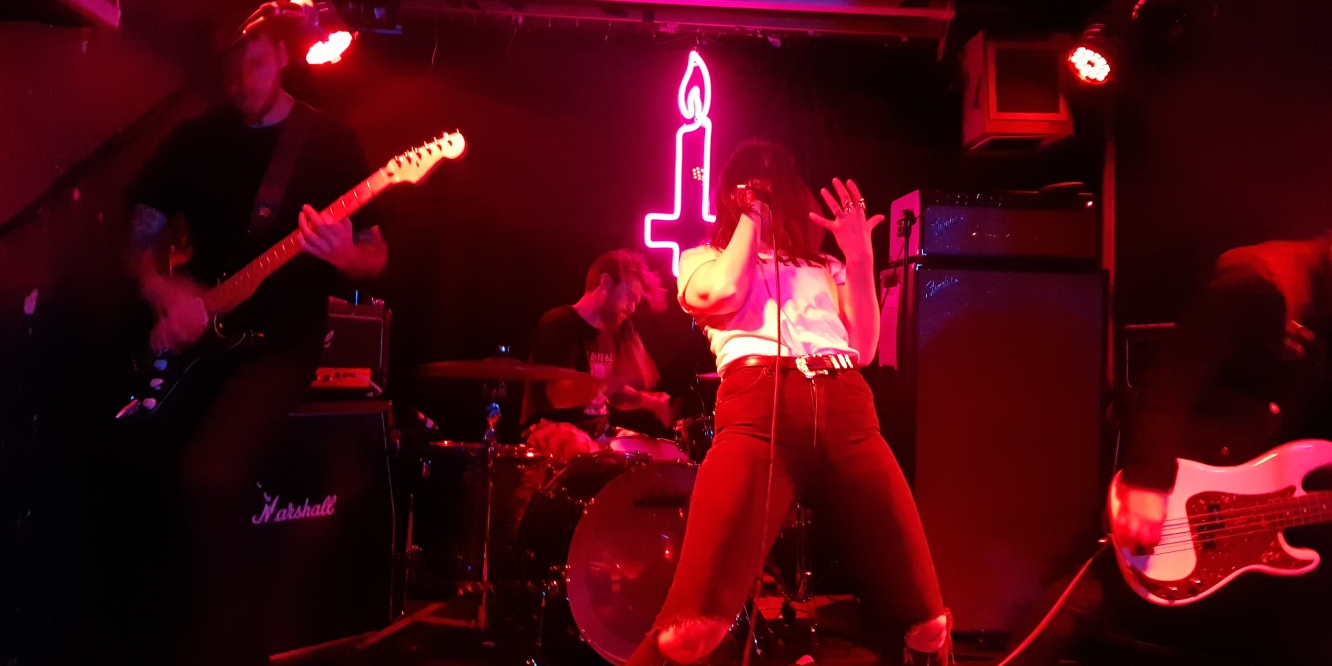 Prior to their debut UK show Pagan lead singer Nikki Brumen told us that part of her inspiration for writing debut album Black Wash revolved around the Jonestown Massacre and the more general issue of worshipping a cult figure. So it should come as no surprise that witnessing the Australian quartet for the first time sees you become a fully-fledged worshipper of their seriously heavy metal powers.

The Bristol noise makers kicked the evening off, opening up with just the drummer and synth player on stage emitting a creepy pulsing synth background noise for a while. The rest of the band eventually joined them and a gradually building noise driven forward by huge drums crescendoed into a big rock out.

They opened up with a track I hadn’t heard before but sounded great, with big singalong vocals dropping into another rock out driven forward by huge bass noise. Four band members all shouting saw things getting off to a pretty heavy, very impressive start.

Another track I didn’t recognise followed, with a funky effects-riffen guitar into then a huge chunky bassline feeding into cool riffs over an angry bassline. And that was followed by what I suspect was another new track, which opened up with an awesome riff, said something about cats (maybe?) then huge noise giving way to various band members screaming “Why can’t you believe us?” over big riffs and bass.

Next was the awesome Weapons, with big fuzzy guitar chords and huge drums under the big cries of “Weapons,” it was really impressive stuff. And that was followed by Lottery, also from last week’s debut EP Goodbye Dinosaur…, with big singalong lyrics followed by a low-tuned riff pounding away over huge drums, showcasing just how incredibly loud these guys are.

And they closed out with the excellent Triceratops, with a low verse gradually building into a massive noisy chorus to close out an extremely impressive, extremely loud set.

Pagan then ramped up the atmosphere, taking to the stage to the sound of bell tolls before jumping into my personal favourite Pagan track Death Before Disco. Nikki opened a bottle of champagne and began drinking it, before pouring it down herself, as the huge riffs and pounding drums kicked on around her then joined in with huge screamed vocals.

They followed that up with Holy Water, in which Nikki showed off her vocal power by switching between her high-pitched vocals and huge low growling screams, it was truly unbelievably good. See below for an example:

Blood Moon was equally impressive, and just ridiculously heavy. Big reverby guitars opened up with Nikki drinking champagne on the floor, then a high-pitched guitar lick took over alongside huge bass noise before Nikki’s intense vocals take over supported by pounding drums and bass.

Then, they played this…

Next, they jumped into Imitate Me with its big jaunty guitar riff opening up then a simply brutal opening, after which Nikki starts crawling around on the floor. A big smash of guitar and bass come in under huge screamed vocals then loads of repeats of “Imitate me.” It was massive.

Fluorescent Snakes saw huge riffs open up, then Nikki screaming away followed by big “Yeah yeah yeah” vocals, before another big bouncy riff opened up Silver, during which Nikki began writing around on the floor amid driving riffs. And they closed out in fitting fashion, with Nikki’s huge vocals over a darting riff then big cymbal noise over Nikki’s vocals.

There may only have been two bands on show on the night, but both were incredible and it’s easy to see why the Pagan cult is growing swiftly, and when you see them live you will become a worshipping member.

You can see Pagan and Phoxjaw on tour across the UK starting with Bristol tonight, then consecutive nights in Manchester, Leeds, Birmingham, Bournemouth and Milton Keynes. More info is here.

One Reply to “Gig Review: Pagan cult arrives in the UK with Phoxjaw”