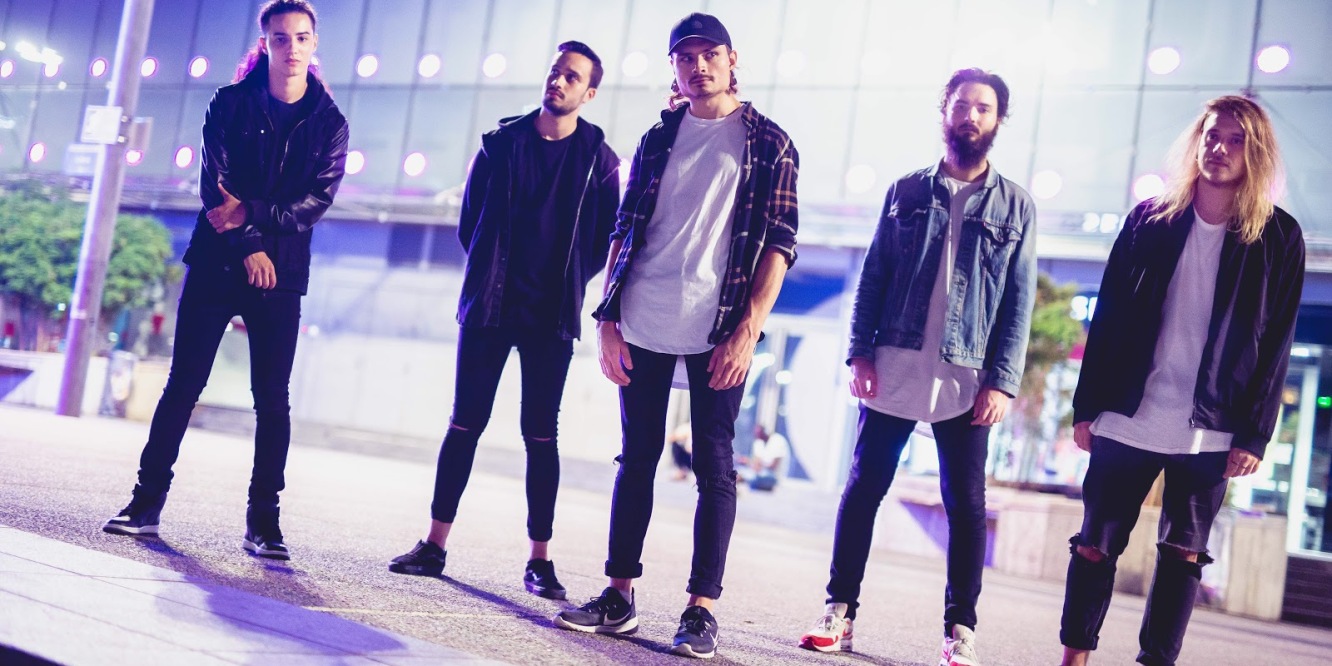 A few weeks ago we gave you a taster of the savage tech-metal sound of French deathcore five-piece FRCTRD, and we were so excited by their brutality that we followed it up by having a chat with the band.

The Parisians first formed back in 2014, brought together by their shared love for the same music. As the band tell us: “What brought us together is the alchemy that took place between our respective music tastes, our mutual desire to create the one formula that would resemble us and finally, to offer something that we would have loved hearing ourselves as spectators.”

The quintet of Vincent Hanulak (vocals), Filip Stanic and Clément Barea (guitars), Sam Tanem (bass) and Manu DLB (drums) have since set about honing a huge sound that, as the band name suggests, is built around being fractured and, in their words, “negative and melancholic.”

As they expand: “If we’d have to describe our music to someone that has never listened to us, he/she should expect something unstructured and multi-faceted. In that way, our name (‘fractured,’ in case you ever wondered, haha) is quite representative of our music. Our goal is to surprise, to provoke a reaction and ultimately trigger an emotion, may it be positive or not, doesn’t matter, as long as the listener feels something then it’s mission accomplished!”

Latest single Tyrant gives us a taste of this, lulling you into a false sense of security with a mellow opening that’s swiftly smashed wide open by a scream from Vincent, before huge booming low-tuned guitars with blitzes of techy guitar sounds come in under savage vocals. Everything drops out bar a distant riff, only to be blown away by throat-destroying growls, then some “oo-ah” vocals give way to an avalanche of brutal techy guitar. More melodic instrumentals and searing high-pitched guitars kick in under slightly less intense, but still screamed, vocals, before a moment of calm is interrupted by stabbing guitars and more awesome techy instrumentals. Check it out below.

On the track, the band explain: “The meaning of Tyrant’s lyrics depends entirely on perspective. To Vincent, they mean something completely different than to Manu, even though they both participated in the writing of the lyrics!

“At its core, Tyrant is about looking for relief; the quest of a new safe haven as the previous one has been torn apart. It goes further than that, though, as it’s also about breaking free from the tyrants that lead our lives and taking back the right to make decisions for ourselves. These said ‘tyrants’ are not necessarily other people, but any kind of pressure that can have an impact on your life, behaviour and decisions. Those could be social, professional, religious, cultural…the list goes on. One thing we know for sure is that everyone will walk away from it with a unique, personalised take… based on their unique, personalised experiences.”

But perhaps the most intense, and most popular with 550,000+ Spotify streams, sound of FRCTRD is the huge Negative, from debut EP Fractured. Opening up with high-pitched guitars it soon drops into booming riffs with distant electro sounds in support, before a barrage of huge screamed vocals takes over. Huge driving guitars and disgustingly heavy drums burst in under frankly terrifying vocals, then huge low-tuned chords lead back into another burst of savage vocals. Check it out below:

While these two tracks are crushingly heavy, there is a melodic side to the band that comes across in another EP track Cloud. Beginning with huge guitars and vocals, and a huge “bleugh” sound, wild guitars play off against each other. But halfway through it drops down into a light guitar lick and distant strings, which are soon joined by a heavy bassline that’s introduced with a huge drum roll. The intense vocals come back in and feed into a big high-pitched solo, with diving guitar underneath, as the song winds to a more melodic ending.

But if you like your guitars super heavy then check out Act.Zero, which opens up slowly then big chugging guitars and wild drums take over and continue under an eerie synth sound, and the equally intense Crow.

The band’s key influences are the likes of After The Burial, Breakdown Of Sanity and Structures, but their musical inspiration comes from another place altogether.

As the band explain: “Japanese anime OSTs have their share of influence over our music, especially when it comes down to writing melodies or in general for our songs’ overall atmospheres. However, this aspect of our writing will be more present throughout our upcoming tracks.”

We haven’t met too many French bands, let alone heavy French bands, so we asked the guys for their thoughts on their country’s metal scene. They told us: “The French metal/hardcore/alternative scene is way larger than you’d expect it to be! Indeed, it contains tons of very talented bands such as Kadinja, Novelists, The Dali Thundering Concept, Betraying The Martyrs, Solitaris or A Bitter End to only name a few, and many, many others!

“The local scene is more than alive and the support is real but the issue we are facing and that puts it in jeopardy is the shutdown of an increasing amount of local venues throughout the country. (This makes) it harder and harder to develop a project, go around defending it and develop a fan base. It is becoming a real challenge to do so when the list of proper local venues is getting shorter and shorter, day after day. Unfortunately, this issue concerns every country nowadays and we can’t stress enough how important it is for music listeners and concert goers to go out and support their local venues and bands!”

And we can’t echo that last point enough. The band are currently in the studio recording their first full-length album, ahead of which they already have their next single done and dusted. As they state: “It took us a while to come back since Fractured but we believe it was for the best and we are super excited to release what we believe is our most ambitious piece of material to date, as a band but also as individual musicians. Sit tight, it’s going to be a bumpy yet sweet ride and we can’t wait to go back on the road to play these new songs for you on stage!”