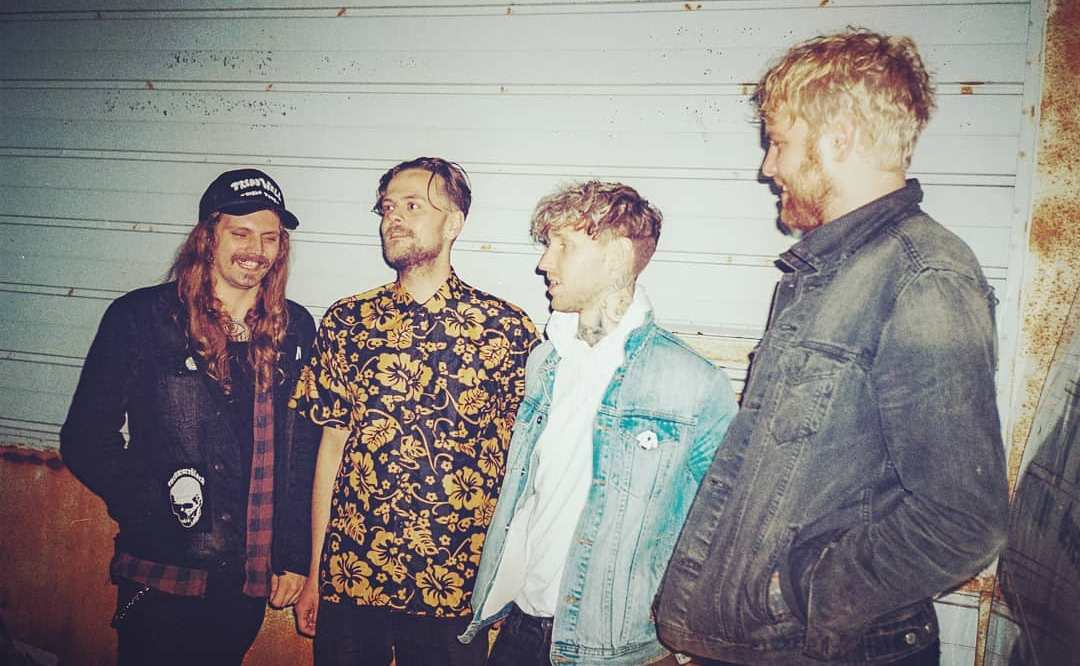 Yet another new band from Hull, and yet another to get really excited about. NEWMEDS offer up an intriguing ‘genre-bending’ sound that fuses its members’ previous involvement in everything from black metal and Mathcore through to punk, emo and garage indie – in their words: “Somewhere in between the Beastie Boys and Rage Against The Machine, with a splash of Emo. It’s hard to pin point.”

The band first started out as a recording project between drummer Joe Brodie and vocalist Nick Cobley around a year ago. As Nick explains: “We had a sound in our minds and the aim really was to be a recording project, getting different musicians to have an input. We had both been in bands since we were kids and didn’t think we would enjoy the starting all over again with the day to day tasks of being in a band.”

But that aim soon changed with the addition of guitarist Mark Wood and, after a couple of practice sessions, the creation of their first song, Roslyn. Nick tells us: “We knew from then on we wanted to take it live, there was a massive energy around the recording. Just before our latest recording we decided to get a bass player who could also sing as we were adjusting our live sound to the recordings. I write loads of vocal parts and we wanted to make sure we had them covered when it went live.” Bassist Sam Rudderforth was added, and NEWMEDS was born.

Their debut single Roslyn opens up with drums through the intro, then a funky fast-paced riff introduces a huge scream of “YEEEEEAAAH!” That drops into a funky little opening verse of edgy vocals over lingering guitars then the big riff dives back in under screamed vocals. A second verse feels a little bit dreamy with echoey vocals and drawn-out guitars, closing with the line “There’s no need to lie, Tomorrow you’ll be begging for your life, We’ll do it all again tomorrow night,” before another huge chorus of screamed vocals “We all know what you came here for” to bring the track to an end. Check it out in the video below:

As mentioned, the band have only been going for one year maximum, so their sound and approach to music is still evolving. As Nick explains: “Personally, I have really changed the way I write lyrics since being in NEWMEDS. I try to tell stories that people can relate to. Our first song Roslyn was written around the bar that Brodie owns (and I work in occasionally). I watched regulars coming in and spilling their hearts out to us, they are so willing to tell you what they’ve been doing and why they’re sad.

“I started to piece together an image of their personal lives in my mind and translated it into a story about a girl who needs a release through booze and drugs. The song splits into two pieces, the first half being that of her getting ready for a night out, to the second half of shame the next morning.

“Whereas more recent songs have really highlighted mental health issues with myself or people around me. Finding everyday life a struggle and the questions you ask yourself in your mind. I always like to have at least one question in a song…. I feel it connects better with the people you’re aiming at if they feel they’re been involved.”

A good example of this latter approach is Cognitive Behaviour, which opens up with effects ridden guitar noise then dives into a deliciously jumpy riff over huge driving drums and cymbal smashes. Edgy vocals take over and gradually increase in intensity towards a big screamed chorus of “Yeah, yeah, Something wrong with the way I’m feeling, Yeah, yeah, But you don’t care, Yeah, yeah.” Another big riff kicks in and feeds into a more intense second verse, then big rolling drums and guitars build the atmosphere, before a mini guitar solo feeds into one final smash of the chorus.

On the track, Nick tells us: “This is basically about me going through CBT training to get a better understanding of my own thought process. That song means a lot to me as it’s me fighting with my own brain and thinking no-one cares, when really that’s not true. A lot of our songs are about mental health and fighting your own demons, it kind of happens by accident.”

And in terms of the music that influences them, you won’t be surprised to hear the likes of Nirvana, Rage Against The Machine – and a personal favourite – Taking Back Sunday are high on the list, along with the current likes of Frank Carter, Every Time I Die, Highly Suspect and Royal Blood.

This is the latest in a long stream of bands we’ve discovered from Hull recently, including the likes of Battalions and 99% COBRA, so we asked Nick for his thoughts on why Hull is so rich for rock and metal talent. He told us: “There has always been a lot of talent in Hull, I just think it has a better platform now. How there hasn’t been a band from here that’s broken through and become super famous yet is beyond me.

“I think it’s a city with a good story to tell. The music scene has kind of kept a lot of the same people throughout the years, they’ve just evolved and become what they were always meant to be. I haven’t been in a band for years, and I see the same people in the scene now as I did when I was a spotty teenager playing Pop Punk.

“We aren’t a “big city” like London or Manchester so I think we get overlooked so easily. But now we are in everyone’s face with this whole City of Culture thing, we can no longer be ignored. The city has evolved with the likes of independent venues like Polar Bear, Welly, Dive and Fruit (R.I.P) and also with Humber Street Sesh growing in size every year we are finally catching up.”

The band were in the studio at the end of 2018 recording their latest single What’s Your Problem, which will be out this month, have a gig at the Fulford Arms in York on 25 January and they’re supporting the awesome SHVPES in Doncaster on 7 February. They’ll also be doing a Valentines date with BBC Introducing, while they’ve been offered four days of gigs in New York in March – which is pretty exciting. Check out upcoming gigs here.

As Nick adds: “We will never overplay a city or venue, so if you are thinking about catching us don’t hesitate as we have big plans.”

NEWMEDS are big, brash and brutal, with a metal-meets-punk that’s huge on energy and we’re loving what we’ve heard from the guys so far. So go give them a listen!