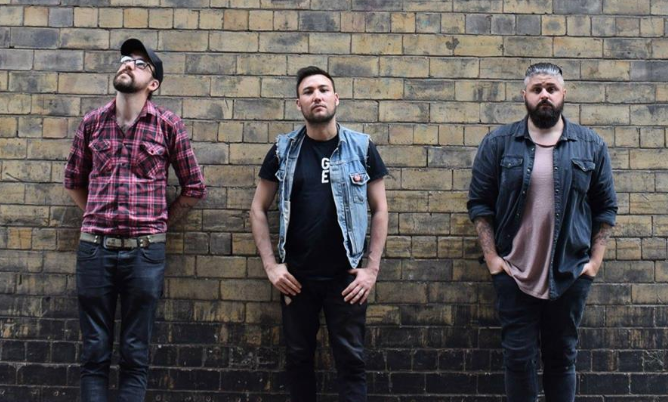 As if their exciting “progressive, cinematic and anthemic” alt-rock meets post-rock sound wasn’t enough to have us hooked, Glasgow’s Atlas : Empire have deepened the intrigue with a concept album that focuses on the human race’s growing reliance on technology.

The founding of the band back in 2011 presented an opportunity for Jamie Sturt and Steven Gillies to take on the role of main songwriters for the first time, then adding Robert Hasebe to the mix. And the result is a fusion of modern progressive rock and alternative rock with elements of 2000s post-hardcore, ambient electronica and shoegaze/Post-Rock textures – drawing on a few of my favourite bands Thrice, At The Drive-In and Cave In among their key influences. So it’s quite the melting pot.

As Steven tells us: “I had been working on new music since my previous band had dissolved in late 2010, my writing was moving in a more ambient/progressive direction, taking influence from bands like Oceansize, Circa Survive, The Dear Hunter etc…, compared to the angular post-hardcore of my old band. Jamie’s background was more rooted in alt folk/indie, but he also made cool, left-field electronic music – so we started combining elements of all of the above, and our debut EP, …To The Astronaut, was written.”

The interesting concept of their debut album, released in December, first emerged with the song Long Live The New Flesh from their most recent EP For The Satellites, which was released in 2015. As Steven explains: “That track explored what would happen if humanity became entirely reliant on technology/automation in every aspect of their lives – and more importantly what happens when that system fails?

“Jamie and I got so deep into that concept whilst we were writing the lyrics, that it became necessary to explore different aspects of that possible future – so although we draw from personal experiences as well, each song is centralised around that theme. Although not in chronological order, each song takes place before, during or after a mass technological collapse – from the perspective of a different ‘character.'”

Further expanding on the perspectives they explore on the album, Steven adds: “The album’s narrative is less socio-political than it may seem. I’m really into Black Mirror – so much so that we have a song, The Entire History Of You, named after an episode. In a similar way to that show, we wanted to provoke thought about how possible this type of future is for us – as we are becoming increasingly reliant on technology, social media etc. The negative impact of these ‘communication’ mediums is pretty scary – organic, human interaction is becoming outdated.”

And the sound of The Stratosphere Beneath Our Feet is equally as brilliant as Steven’s description of the inspiration behind it. Opening up with brooding vocals in the intro to As Yet Unwritten, it soon explodes into huge cries over the top of a meandering guitar lick, diving chords and driving drums in a huge mass of atmospheric rock. It’s a highly impressive start.

Equally good is fourth track The Moment We Were Exploding, which opens up with lone vocals then a huge smash of guitars kick in under more huge vocals. Big high-pitched vocals come in, then lead into another smash of rockiness gives way to a really fun section of dual diving guitar solos that continue under ridiculously good vocals. Check out this huge track below:

The album offers lighter moments too, including the single Gethsemane and the previously mentioned, near nine-minute epic The Entire History of You but, in my opinion, Atlas : Empire are at their very best with the fast and frenetic rockiness of tracks like Hostess. But the album is packed with fantastic tracks like the delicious penultimate track Our Hands Part The Waves that you need to give a listen to appreciate just how good this band is.

On the album, Steven tells us: “This album has been in the works for a long time, really since directly after our second EP (Somnus, 2013) so we are both excited and relieved that it’s finally released! A handful the songs on TSBOF have been part of our live set for years, so fans of ours will be familiar with some of the material – tracks like As Yet Unwritten, Hostess and It’s All In The Reflexes. Having the scope of a full album has allowed us to showcase a lot of different moods and styles, to a far greater extent than possible with an EP.”

The band kick off 2019 with a show at The Slaughtered Lamb in London on 18 January, supporting Dayseeker, ahead of writing new music, then heading out to Canada in April to tour the album in “our second homeland!”