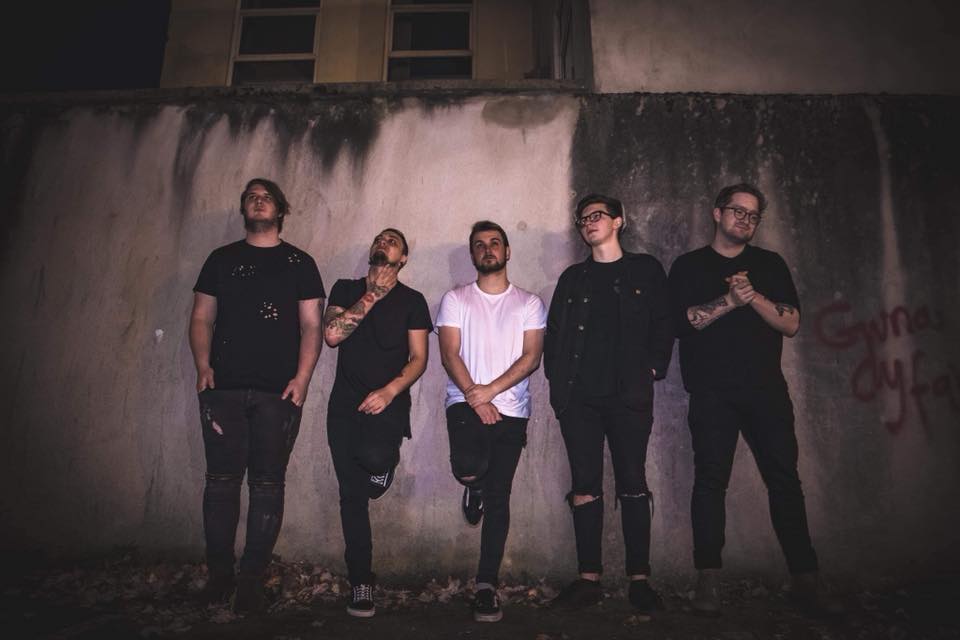 Welsh post-hardcore will always be a musical offering that’s close to my heart and, in south Welsh outfit A Night Like This, the Valleys’ heavy scene is well and truly alive and well.

The band released their debut EP last May, then added a fifth member to their ranks and released fantastic latest single Thrones towards the end of the year. But to simply label them as a post-hardcore band would be somewhat misleading.

As the band tell us: “We cater for everyone. We have angry songs like Burdens and then we have songs that talk about mental health like Free and title screen, then our newest song Throne is about conformity. We try to give the listener emotion and energy but also some good old healthy riffs.”

The quintet first began with Dom Hoven (vocals) and Josef Lovett (bass and vocals) studying music at college then jamming in Joe’s garage. They’ve since added Dan O’Brien (guitar), Dan Phillips (guitar and vocals) and Ronan Samolinski (drums) to the mix with a specific aim in mind. As they tell us: “Ever since starting the band we’ve wanted to write about important subjects like mental health and this is something that’s brought all of us closer.”

The band released latest single Throne back in November, which sees the band bring out a heavier edge to their sound alongside a more polished feeling than what we’ve previously heard from them.

A building drum intro drops into a cool blast of edgy guitars and big cymbals that feed nicely into a classic post-hardcore combination of screamed vocals over guitars that gradually increase in intensity. That builds to a chorus that combines clean vocals answered by big screams with pounding drums and booming guitars.

A prolonged quiet period follows with delicate vocals supported by light flickering guitars, with screamed vocals entering occasionally. Suddenly the big screamed vocals return supported by big backing vocals and a lingering high-pitched guitar then big guitar smashes and huge vocals. It’s a brilliant, hugely passionate ending to the track that you can’t help but get involved with. Check it out in the video below:

On the track, the band tell us: “It’s a lot different to any of our older songs so I think as a band we worried that it wouldn’t be taken well, but we’ve had it played on the radio and it’s been added to playlists so we’re guessing people like it! Expect heavy riffs and emotion. As with any of our songs, we tried to be as relatable with this song as we could, it’s about a topic that we feel everyone has, and will, experienced.”

Throne was recorded with the help of Michael Paget (Padge), lead guitarist of fellow Welsh rockers Bullet For My Valentine, on which the band tell us: “The experience was amazing and working with someone like Padge, who has so much experience, really brought out the best in us and the song, and then also having Drew Hamly working with us as co-producer really helped push the song vocally.”

The band certainly have the ability to write a killer riff and seamlessly mixing heaviness with melody, as excellent debut EP Between Hell & Home is testament to. The aforementioned Burdens is a fantastic example, with big chunky guitar chords dominating before a diving riff kicks in under booming chords amid Dom’s intense vocals. However, I suspect they’re only going to keep getting better as they take things to new levels as a five-piece.

The band members share a common love for “music that makes you feel something,” calling out My Chemical Romance and newer bands like Holding Absence for their ability to “connect with their listeners and make their fans feel something.”

And that comes across in the themes they write about. We’ve already touched on the mental health topic that’s behind a lot of the A Night Like This music, but digging deeper into what inspires their music, the band tell us: “A lot of the early things we wrote about were things that we as a band had gone through or were still going through. Nowadays we write to try and help and create a narrative that people can directly link and relate to. Life can be hard so we feel like we are lucky to be able to give people music that makes them feel less alone – well that’s what we hope we’re doing.”

This is a band that’s very much going places, having ended 2018 on a high supporting Blood Youth and Dream State. You can see them play alongside Area 11 at The Globe in Cardiff on 28 February, on which more info is here. They’re already hard at work getting new music ready and have plenty more shows to announce, so keep your eyes peeled for A Night Like This in 2019.