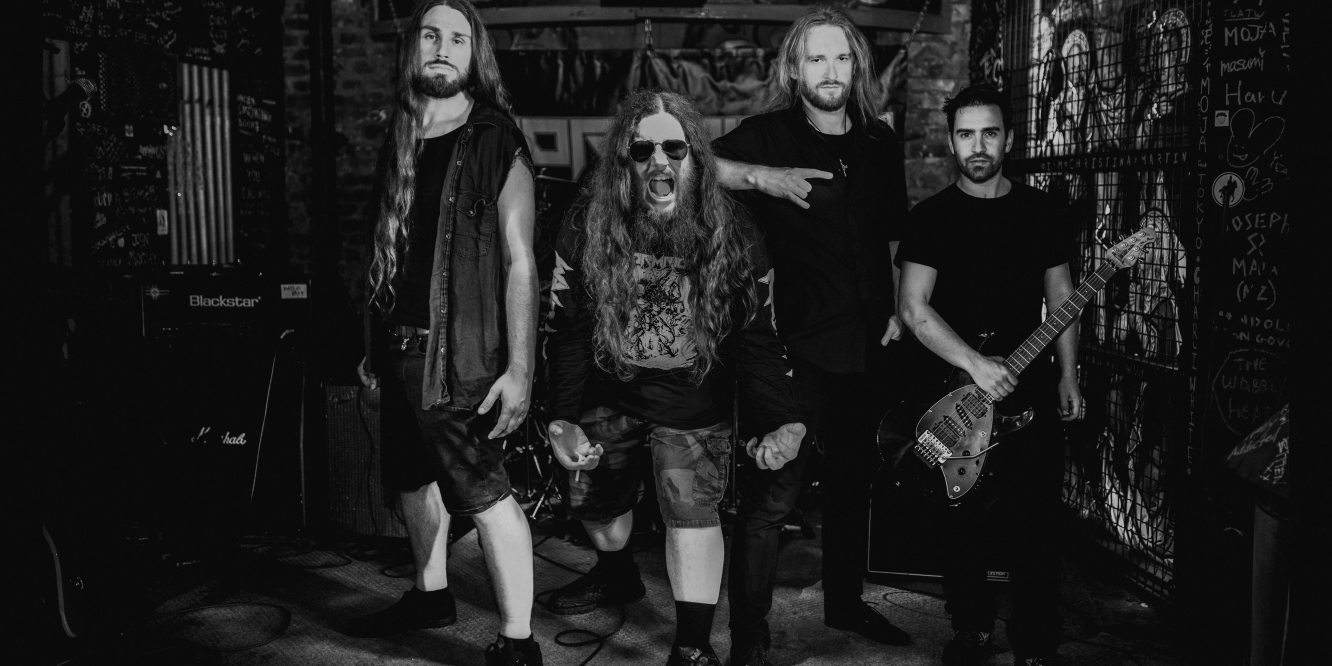 Prepare for a thrilling journey back to the days of big hair, scintillating guitar solos and rampant riffs with Manchester’s Stormrider. The quartet encapsulate everything that’s great about heavy metal of old with raspy vocals and the occasional falsetto high notes providing the perfect support to a blitz of guitar goodness, along with a keen sense of melody that keeps things interesting.

As Rob explains: “The four off us all come from different musical backgrounds but share the same passion for music. We have all played in bands over the years previous to Stormrider, mainly originals however Cristiano (guitar) was involved in a covers band. We all love similar bands like Iron Maiden, Judas Priest and Iced Earth, so our influences helped shaped who we are. For me personally, I love playing drums, creating music and performing, so when I became part of the band I found a way to use my musical drive.”

The band released debut EP Heavy Metal Machine last year, of which the title is a bit of a giveaway on what to expect.

It opens in impressive fashion with title track Heavy Metal Machine, which opens up with a fun fast-paced guitar riff and a high-pitched shriek then dives into an opening verse of gruff vocals. Then another big shriek brings in the return of the opening riff, which segues into another energetic verse. A big chorus follows Ready to fight, In for the kill, Never give up, Never give in, Setting the charge, Full throttle speed, Ready to strike, Heavy metal machine,” then gives way to a big guitar solo. This is classic metal at its very finest, and you can check it out in the video below:

The near seven-minutes long In Time begins a little slower, with light guitars and vocals opening up, gradually building in intensity then dropping into down into the light guitars again. A big hit of guitars chords suddenly support more powerful vocals, then a big piercing guitars come in before dropping into a section of building intensity with a looping lick and drawn-out vocals. That builds into an awesome guitar solo over drawn-out chords and driving drums that takes us into an energetic outro alongside a return of the big drawn-out vocals.

Next, The Patroller dives straight into the thick of the action with a darting riff supporting a big guitar solo. Mike’s powerful vocals take over alongside a fast-paced riff, then atmospheric backing vocals mimic a rolling riff before diving into energetic verse. A little guitar solo acts as a bridge into a chorus that gives way to a bigger solo as the relentless energy just keeps going. A really fun stabbing guitar solo creeps in as all manner of shredding goodness take over towards the end of the track.

The Stormrider sound has clearly been honed on the classic heavy metal likes of Iron Maiden, Judas Priest, Saxon, alongside other influences such as Iced Earth, Kreator, Megadeth, Aria and Nocny Kochanek.

Further digging into this, Rob explains: “The thing with our music is that we are typically set within the classic heavy metal style. So if your a fan of Maiden, Priest, Saxon, etc you should love our sound. However we also take a lot of influence from other bands like Iced Earth and kreator who are on the more heavier and thrashier side. If you like to get involved with singing then we have a lot of great chorus sections where we have our fans sing along. So a Stormrider show is always fun and interactive!”

While on their musical inspiration, Rob adds: “When I write ideas for the band, I guess I’m influenced by what is going on at the time in my life. Though some of the material I’ve contributed has just come from my imagination and the creative energies that I have had.

One of the songs we perform called Spirit of the Wind was a song I wrote about loss and love. I left it without a direct topic such as an illness with the hope that it would reach more people, hoping that more people could relate to it. Luckily its topic is something I’ve never really experienced up until now and that is an example of something that has been a product of my creativity. Otherwise, some of the songs’ themes reflect the idea of strength, power, brotherhood etc… As a band, I feel we love presenting powerful ideas through the use of our music.”

The band have a whole host of shows coming up, kicking off on Sunday (10 March) with the third heat of Metal 2 The Masses at Rebellion in Manchester. Find a gig near you here.