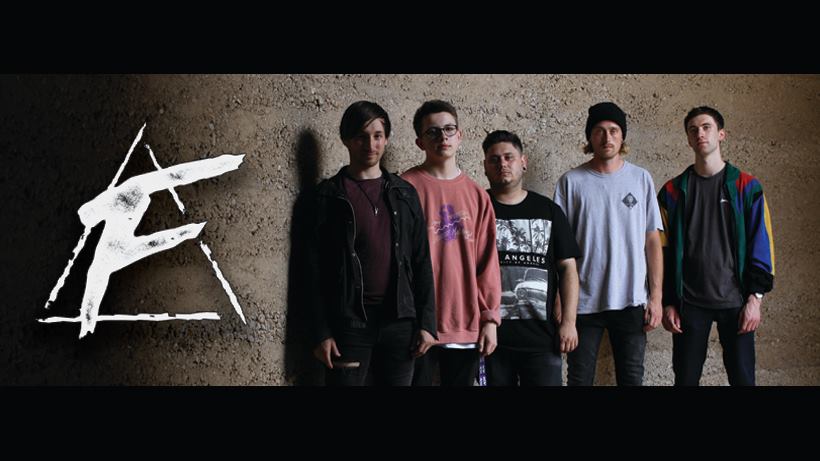 Imagine our excitement when Guildford rockers Follower describe their sound as “Imagine old school Funeral for a Friend and new age Bring Me The Horizon having a baby and calling it Follower!” The five-piece have honed an emo/alternative sound that incorporates modern influences and production – so obviously we love it.

The band initially started out a few years ago, with all the members meeting online. It began with Luke Archer (vocals) and Ollie Moor (guitar) getting to know each other through an online music forum, on which they were looking to start a band and jamming with as many people as possible. They then met bassist Joe Durrant through the same forum, recruited guitarist Damien McVey (guitar and vocals) and began writing their debut EP then added drummer Cody Jones just after they’d finished recording.

As Joe explains: “All of us met through online forums for people searching to start bands. We all love music, writing it and listening to it. Music can play a big part in peoples’ lives and can it be really powerful, it can help people through tough times. It can motivate someone to overcome something. It can make someone happy or sad, it can even bring people together. It’s kinda that, I guess, that brought the band together and motivating us to want to push it as far as we can.”

The band released their debut EP Against The Ropes last month, and it gets off to a great start with the lively Fallen Down. Big guitars kick in following an opening riff, then drop into a verse of Luke’s engaging, edgy vocals that feed into a big singalong chorus.

There’s a more post-hardcore feeling to the big rocky intro to the EP’s lead single Voices, with guitars dropping into a verse of more edgy vocals supported by building palm-muted guitars. Light vocals “To finally cure this pain” give way to a big chorus “Hands up, back pressed against the wall, As I call out for help, There’s no one to be seen at all, The voices that I hide deep inside my mind, Tell me that soon I’m going to fall.” Check it out in the video below:

A second chorus gives way to the light guitar riff, then gradually builds up to big piercing guitars over repeats of “So here we go again, Forerun the hurricane, I need to take control before it’s too late.” Check it out below:

And the EP comes to an impressive conclusion with Dreamer, which opens with big guitars and driving drums that feed into an opening verse. That’s followed by the drawn-out vocals “I’ve watched my mental state wither and decimate, As I got lost in this fucked up game” before the energetic chorus “Wake me up I’ve been dreaming for far too long, Now time is wearing thin on all of the things I should’ve done, Wake me up I’ve been fading in a dreamers sleep, No more make-believe.”

The pace drops down after the second chorus, then palm-muted guitars give way to a big outro of piercing guitars over big chords and driving drums, to bring the EP to a deliciously rocky ending.

On the EP, Luke told us: “This has been a long time in the making and to finally get it out and show people what we’ve been up to is more of a relief than anything! We’ve poured a lot of ourselves into this music lyrically, and we want to share our experiences of what we’ve written about, so the countdown to the EP release is becoming very real for us all.

“People should expect a very energetic vibe, with a variation of sounds from a powerful and emotional background. We’ve already released a couple of singles to give a taste of what the EP sounds like, but each song has its own vibe which we felt we wanted to achieve on this EP.”

While on its creation, Ollie added: “I’d say the most challenging part about creating an EP is actually getting the songs totally finished and being happy with how they sound. Pretty much every song on the EP had a load of rewrites and changes that in some cases made the song unrecognisable from the initial idea.

“It actually got to a point were we booked the studio when some songs weren’t even finished in order to push us and get the songs done quicker. I think one of the main highlights for us was being able to record at Outhouse studios in Reading because some of our favourite bands have recorded there and we learnt a lot during that process.”

Luke explains that there’s a very personal vibe to the record and their music in general. At the time of writing a lot of us were going through a lot of personal struggles,” he said. “As a band we ended up talking about and bonding over our issues, and ended up putting these into the songs that we were writing. Therefore the EP name Against The Ropes from the song Fallen Down seemed most fitting for the theme.

“As listeners, we imprint our own stories onto songs and find our own way to relate to it – whether that’s listening to happy songs with good vibes, or sitting alone in our bedroom crying to sad songs. With this EP we wanted to write about the issues we were struggling with as we find that listening to relatable songs helps to know you’re not alone in your feelings.”

Given it evokes memories of our favourite bands of the 2000s, we love the sound of Follower. Their debut EP is an impressive effort and we’re excited to hear more from them soon. And, as Cody says: “At the end of the day we’re just five lads who wanna write music and have a laugh. We love hanging out and doing the things we enjoy, from Joe and Luke having bottle flipping competitions, to kicking a skateboard around between practice runs, to jamming out and writing/playing music. We wanna get to know our fans and are always up for a chat at shows – just be prepared to take a bit of banter!”

There’s plenty to come from Follower too. As Damien tells us: “We have a lot of new material in the works at the moment so we’re hoping to hit the studio and get some new music out as soon we can!”

And they have two gigs coming up in and around London in the next few months. You can see them at The Fiddlers Elbow in Camden next Sunday (28 April), then at the Roadtrip & Workshop in Shoreditch on 29 June.