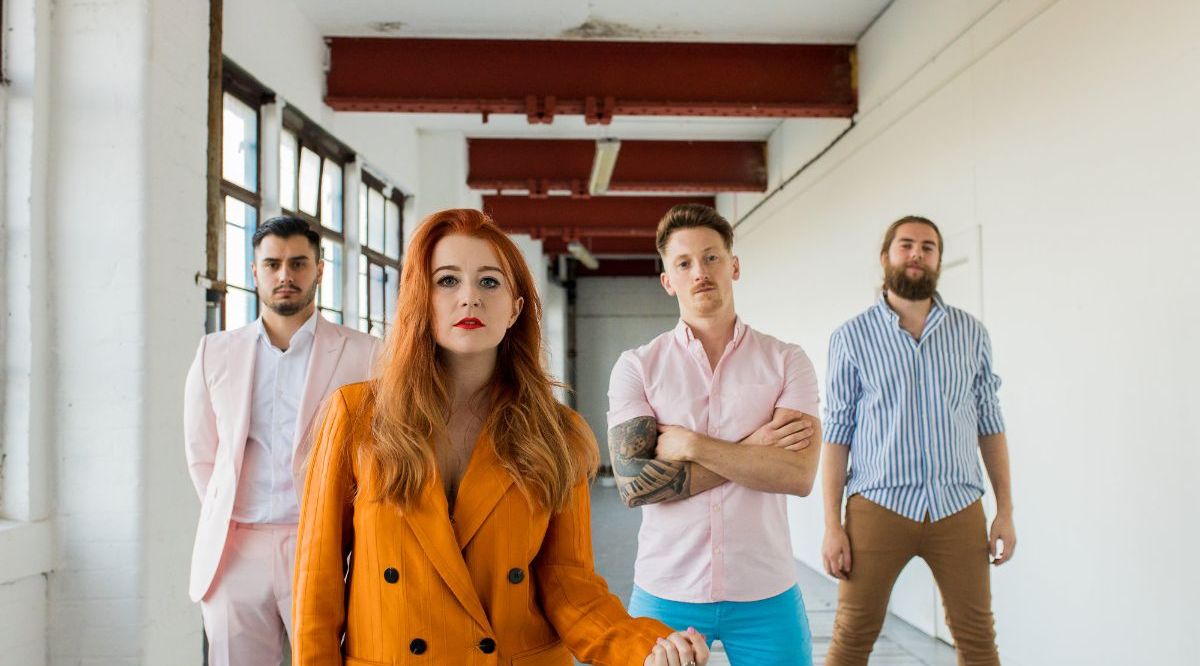 Scotland has a great track record for producing alternative-rock bands and Glasgow’s Banshee continue this tradition with their high energy, catchy riffs and engaging, powerful vocals.

The quartet of Erin Donnachie (vocals), Gavin Williams (guitar), Gianluca Demelas (drums) and Liam Walker (bass) all met through mutual friends and have played for several years, but only became Banshee back in 2016.

As Erin explains: “Personally, I didn’t know that I wanted to be in a band until I joined, which sounds a bit strange. I was studying music at college, I always sang in choirs and jazz bands and had done acoustic gigs in bars and, even though the majority of music I listened to was of a similar genre to Banshee, I never thought about singing in a band. But since joining it’s opened me up to different types of music and amazing bands and people that I never would have met if I didn’t join.”

They released latest EP Bubble last month, on which Erin tells us: “We wrote and recorded it last year so it’s been sitting ready for some time waiting to be released! It’s so good to finally have it out there for people to have a listen to. The new EP isn’t too different from our last release Say My Name, but we’ve toned down the electronics and I’d say that the new tracks have a bit of a softer and poppier side to them.”

It opens up title track Bubble, which gets things off to a big rocky start with guitars and booming drums through the intro. Erin’s vocals dominate the verse leading up to the fast-paced singalong pre-chorus “Sit down, let’s go, Tell me what you wanna know, I’ve been gone right, I don’t wanna fight” which gives way to “Woh oh-oh, You’re on your own.” Check it out in the video below:

The EP closes with Erased, which begins with flickering synth sounds that continue under light guitars and Erin’s impressive vocals. It builds up to a super-catchy chorus of “Tell me something true you know and I’ll lock it away, Show me something beautiful and I’ll make you pay” that’s sure to get stuck in your head.

And for a taste of Banshee’s extra rockiness check out the video for the superb Say My Name below:

The band take influence from the likes of Marmozets, Biffy Clyro and Enter Shikari, while Erin adds: “When recording our last EP Say My Name we took a lot of influence from the band Pvris as at that time their sound is something we were really into. With the new record, I think that we have been listening to a lot more pop and indie music and taken reference to them which I think comes through.”

While when it comes to writing music, Erin explains: “I feel that if you go in with the best intentions of writing an absolute hit you tend to come out empty handed. Influences when writing music can come from how you feel that day, what’s going on in your life or from absolutely nowhere.

“For example, recently at rehearsal, Gavin was playing a nice chord progression, Liam joined in and I asked them to keep looping it until I managed to write something over it. We played the song at our last gig at King Tuts and so many people asked about the song and if we had plans to record it – which we now do.”

There’s plenty more to come from Banshee, including playing Butefest on 26 July and having been shortlisted to play Oban Festival. They’re also keen to get back in the studio to write more music – potentially for their debut album. As Erin says: “We feel that writing an album is the next step for us after several EPs and after how well the release of Bubble has gone I think that it’s given us a push and a bit of energy to get creative!”