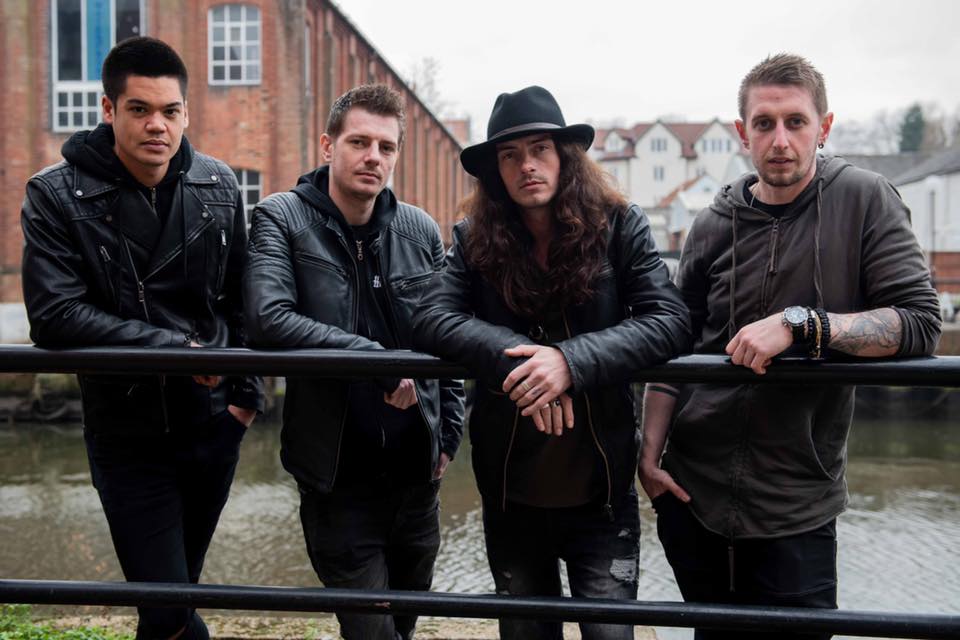 This week’s New Music Friday is on… Saturday… but, as it’s a long weekend in the UK we figured it gives you plenty of time to enjoy this feast of great new music.

This week we’ve got the debut album from one of our favourite British rock bands, new music from a couple of the best new British metal bands out there, a debut album of delicious blues-infused rock and some Australian savagery. Turn it up loud and fill your ears with the new music below.

We’ve got a real cracker to kick off, the debut album from Cambridgeshire rockers Hollowstar.

It kicks off with a building intro to Take It All that drops into big booming rocky chords. Joe Bonson’s engaging vocals take over in a lively opening verse that features cool repeating words, then big stabbing chords support a catchy chorus. A big drawn-out solo takes over after the second chorus, then rolling drums and guitar riffs bring a huge opening track to an end.

The big rockiness continues in most recent single Let You Down, which begins with a delicious driving riff and pounding drums that continue through a lively opening verse of croony vocals answered by bursts of guitar. Stabbing guitar chords lead into a chorus of funky vocal delivery of “I don’t wanna let you down.” A second chorus gives way to cool little bursts of guitar answered by big descending chords, then flies into a big solo.

Then Invincible opens up with an intense flying guitar riff that’s joined by pounding drums and feeds into an opening verse then fun vocal delivery of “I know, I never let you go” before a catchy chorus “I won’t live forever, But just imagine if we do, We’ll take the world together, While we feel invincible.”

Money opens up with a delicious wah-infused then blasts into big rockier repeats of the riff. Joe’s vocals are answered by blasts of guitar, then the rocky riff returns under cries of “Do you want money, Is money all we need, Do you want money, Does it care for you and me.”

That’s followed by the delicious All I Gotta Say, which begins with a low brooding guitar lick, kicks into an opening verse dominated by Joe’s vocals then a big smash of rocky guitars. A bigger chorus of singalong vocals “Bye-bye baby goodbye, No need to dry my tears, No reason to try, Bye-bye baby goodbye, All I gotta say to you I’ll say another time.” Funky little bursts of guitar kick in, then another deliciously cool laid-back verse is followed by a big rock out that feeds into another singalong chorus then a huge guitar solo.

The rocky goodness just keeps on coming, including the super-catchy Good Man Gone and Overrated, which opens with a funky little guitar lick then blasts of guitar support Joe’s vocals and ends on a blistering guitar solo from Phil Haines.

It closes with Sinner, which opens up with an awesome riff then an engaging opening verse. A big chorus of fast-paced chorus follows and drops into the opening riff, and another huge solo takes over after the second chorus.

The first new music of the year from the London rockers opens up with delicious fuzzy guitar that continues through an intriguing opening verse. A cool high-pitched lick kicks in then gives way to another meandering lick over the top of the fuzzy guitar support and drops back into another laid-back verse. Slow looping riffs come in over the fuzzy guitars, then it closes with cool little licks over low vocals.

Offering a lovely taster of what’s to come from the Lincoln metal crew’s debut album next Friday, Damage Everything is unrelentingly heavy. Opening up with big screamed vocals over intense stabbing guitars and wild drums it drops into booming guitars over frantic bass drum. That feeds into spoken vocals then a chorus of shouted vocals over doomy cymbals that ends on a guttural scream then cries of “Damage everything.”

Death Blooms – You Are Filth (EP)

And if heavy’s what you like, then how about the beautifully titled second EP from Liverpool’s Death Blooms.

Opening track Crosses features big drawn-out vocals over a backdrop of heavy guitars through the chorus then dives into a darting low-tuned riff over pounding drums before huge screams intersect blasts of guitar.

Then the intense Filth begins with big blasts of guitar and drums answered by screamed vocals, before clean vocals. There’s a really cool breakdown of guitars with chugging low-tuned riffs before diving back into more intense screams.

Believe opens up with light repeating guitars, then pounding drums come in under drawn-out high vocals and guitars then a big driving riff kicks in under screamed vocals. Clean vocals “Take me away from me, I don’t wanna be me anymore, Give me something I believe, I don’t wanna be me anymore” give way to heavier vocals and guitars. Chugging chords support huge screams alongside big booming drums then drop into a big final blast of the chorus – this is a seriously good metalcore song.

Speaking of good, final track Rotting Away begins with big low-tuned guitars then a huge scream over a bouncy riff then launches into a lively vocals supported by a lively riff and huge drums. Big cries of “I am the energy, you are the enemy” feed into the shouty, strangely catchy chorus “The place where we live is the place we decay, No-one knows where we stand when we’re rotting away, rotting away.” Low-tuned guitars come in under spoken vocals, which intensify into big screams and a breakdown of stabbing guitars that builds up to a final chorus.

This is a superb EP from one of the most exciting new British bands out there, so go and give it a listen on Spotify and iTunes, and follow Death Blooms on Facebook, Instagram and Twitter.

The trademark intense sound of the Los Angeles band is also back for the first time in 2019 with an absolute banger of a single. Assassins starts slowly but gradually builds up to an avalanche of low-tuned guitars and pounding drums that are soon joined by a cool high guitars. Stabbing guitars continue under an atmospheric verse then pre-chorus line “I never wanted a taste of you, I only wanted to taste the truth” feeds into a lively chorus.

It builds in intensity with heavier vocals before dropping into a huge fast-paced guitar solo, a quick return of vocals then gives way to more shreddy awesomeness to close.

Some good old angsty rock’n’roll as London’s Saint Agnes, who we introduced you to back in November, release their debut album.

It gets off to a good start with the album’s title track, which opens up with a fun riff under frontwoman Kitty’s spoken vocals. The intensity builds with noise and ends with repeats of “Welcome to Silvertown now.”

And The Death or Glory Gang fuses big fuzzy riffs with Kitty’s deliciously edgy vocals. A funky riff opens up and continues under wild vocals, with repeats of “I am nothing” and “I said cool yourself.” The pace drops down then Kitty’s vocals are left to do their own thing before diving into a big fuzz-laden rock-out featuring big bursts of guitar and huge vocals.

The blues-rock goodness is present in all its glory on penultimate track Why Do You Refuse To Die?, which starts with Kitty’s lone vocals with harmonica creeping in. Guitar noise enters before Jon’s vocals “Dust in my eyes, Cigarette in my teeth, Real tough guy or real deadbeat” take over and are soon joined by Kitty and gradually increase in intensity. A dirty repeating riff kicks in then suddenly drops down into low repeats of “Why do you refuse to die?” that again increase in intensity until the stabbing riff returns before wild noise closes the track.

The Final Clause of Tacitus – A Region of Opacity (Single)

The latest in the Reading funk-rockers’ new single every first day of the month begins with building guitar noise that extends under a spining little guitar lick. A cool little guitar solo feeds into a lively opening verse of rapped vocals over the spinning high-pitched guitars. A second verse ends with fast-paced vocals “Turn it all around, turn it all around, It’s coming back down, it’s coming back down, Put it on the ground, put it on the ground” then booming guitar chords kick in over cries of “Get the fuck up.”

Check out the latest accompanying animated video here (it won’t let us embed for some reason).

The Gloom in the Corner – Survivor’s Guilt (Single)

The Melbourne hardcore act with one of the greatest band names around return with another dose of savage intensity. Opening up with booming guitars under huge screamed vocals it drops into the shouted “Depraved, disengaged, There’s nothing here to stop me from an early grave, Tie the noose, follow through, It’s either join the ones I love or suffer as the Devil’s muse, An acquaintance of the hangman came to see me today Naïve to disarray.” Then spooky high-pitched guitars stab away over booming chords and screamed vocals, before giving way to clean vocals over a cool guitar lick. That immediately drops into diving guitar chords under huge screamed vocals, then a cry of “Fuck it” gives way to savage chugging guitars and even more intense screams with creepy synth in the background.

This is fucking awesome, and there’s an equally intense video to go with it, so check it out below. Survivor’s Guilt is out now on Spotify and iTunes, and you can follow The Gloom in the Corner on Facebook, Instagram and Twitter.

And some more heavy stuff to end from our favourite German metallers, who we first introduced you to back in April 2017. Gold opens up with a spinning high guitar that continues under chugging low-tuned guitars. Cool high vocals come in and are swiftly blown away by a wall of big screams and pounding drums then intense low-tuned guitar smashes, before feeding into a melodic chorus. The second verse ends with big screamed vocals then a huge guttural scream from vocalist Wim.