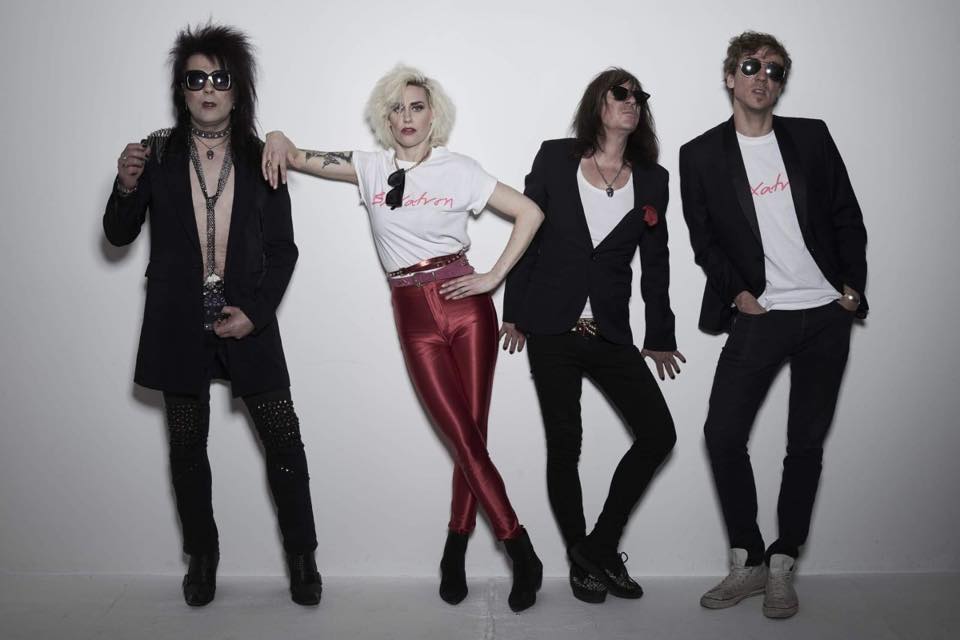 Way back in April 2017 we saw glam rockers Bexatron support our pals in Lightscape and the mighty Esprit d’Air. At that point they didn’t have any music for us to listen to even though we loved their show and we’ve had them on our list to speak to ever since.

Now, more than two years later, it’s finally happened! Fusing rocky instrumentals with the distinctive vocals of frontwoman Bexx, Bexatron describe their sound as “high-octane pop with a glam coat.” Which is a pretty good image to be introduced to them with.

The Bexatron story began with Gregster looking and failing to find a singer to front a project he’d been working on. One day Bexx walked into Bruno’s cafe on Wardour Street in Soho, London, and the rest is history – with the addition of Adam and Belle.

As Bexx tells us: “I was working as a bartender in a cocktail bar in Soho. I’d moved to London from Leeds to pursue a career in the music industry…it had been put on a shelf as London is so busy I just got caught up in working to pay the bills!

“A happy chance meeting in Bruno’s cafe whilst I was on a break. Gregster was there, cup of tea in hand and approached me as I was walking out the door… asked if I could sing and the rest is Bexatron history!”

They’ve since honed a big, catchy rock sound, which they describe as “cheeky, fun and vivacious” led by Bexx’s huge vocals. And our first taster is debut album Hey You!, which was released last year. On it Bexx tells us: “I think people like it because it has a story and a theme and there’s heart and soul there. Real music for real people.”

There’s a real London feel about their album, as Gregster explains: “It’s very Soho, London based. That includes the people that live and work there and also what’s happening there, so it gave us a pretty wide canvas. Also, it’s very urban. We are not the sort of band that writes about seascapes or tapestries, no disrespect to those that do.”

While the Bexatron sound is nicely epitomised by the excellent album opener Out Of My Tree. It opens up with a little drum roll then Bexx’s big cries of “Ready, are we ready? Let’s go” and dives into a verse led by her high-pitched vocals then cries of “I can’t get no satisfaction baby, No I don’t like the world I see, All I want to be is out of my tree, Get out of my tree.”

The album is packed with energetic rock, including the super lively New York Doll and I’m Trash, but a personal favourite is the excellent closing track Hex Your Ex. It opens up with the line “Got a text from the ex today he’s found himself a brand new belle, Stick a pin in his side and he can go to hell and back.” Looping keyboards help build up to a big singalong chorus “Gonna voodoo you, I’m gonna hex your ex… Gotta feel better when you hex your ex yeah.” Give it a listen below:

On the album, Gregster adds: “The album so far has been well received. We are going to be touring with it well in to 2020. By that time it will be global. Hopefully!”

Bexx’s musical background may go some way to explaining the infectious catchiness of Bexatron. As she explains: “I’ve been singing and performing since I was 4 or 5. My party trick was singing tunes from Rocky Horror Picture Show and Little Shop of Horrors to the quite frankly shocked guests at my parents’ parties! I was in all the shows at school. Then my brother introduced me to David Bowie and The Cranberries and of course Blondie. So I wanted to be a pop singer.”

And, once you’ve listened to them, you won’t be surprised to learn that Bexatron’s musical influences the likes of Rolling Stones, The Kinks, Patti Smith, Debbie Harry and Madonna. As Gregster explains: “I’m drawn to strong front people with an artistic and strong character and a sense of over-the-top flamboyance and cabaret in their performance.”

While on what inspires their music, Bexx adds: “I think we want people to relate, and have fun…I like to write about characters I’ve come across people that weave in and out of our lives but leave an impression.”

Bexatron have been busy promoting their album through Europe, the USA and Canada while working on new material in their mobile studio, the BeXmobil. You can see them around London in the next few months and if you happen to be in Ottawa, Canada, on 3 July, which is pretty damn cool! More info on their gigs is here.

And when it comes to their live show, Gregster adds: “We are trying to work on the production level of our show audio/visually. We want to start giving people who come to see us some value for money and also say ‘wow that was worth seeing.'”