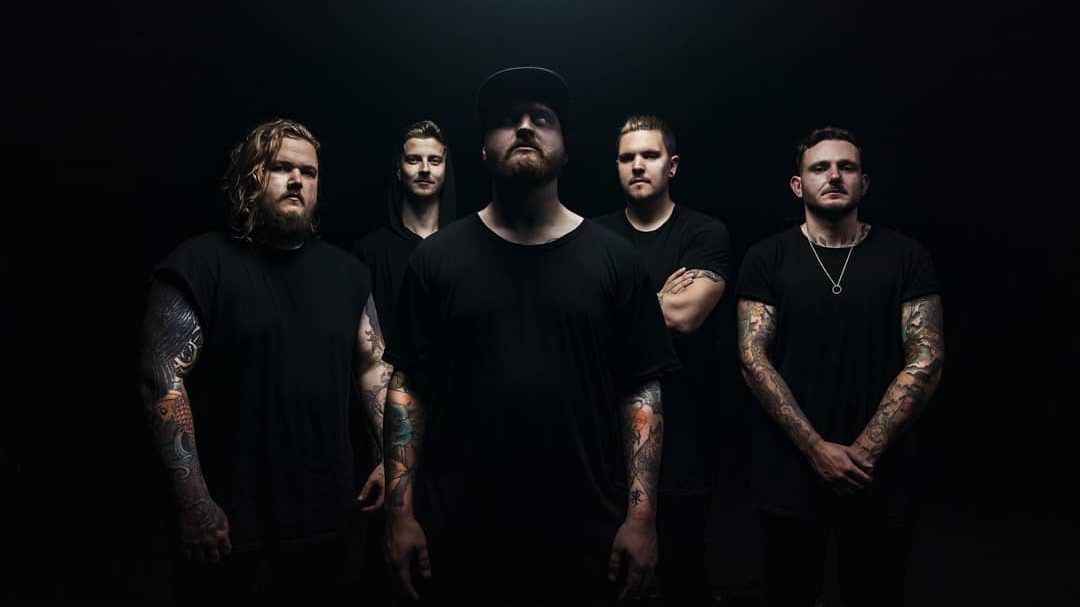 Exciting new Birmingham metalcore act Overthrone offer an intriguing sound of sheer heaviness with a melodic edge. But the first thing that you will notice is that these guys are heavy – seriously heavy.

So heavy, in fact, that we thought we would let their words summarise it: “Imagine all the worst shit that life can throw at you over a 25 to 30 year period. Multiply it by 5. Put it in a 5×5-metre room and shut the door. Give it distortion and down tune the fuck out of it. That’s what Overthrone sounds like.”

The quintet of James Runham (vocals), Luke Thompson guitar) and Rob Steele (guitars), Joe Morton (bass and vocals) and Josh Moran (drums) have played in bands of varying success for several years – with the most notable being Luke and Josh being in Aurora, which enjoyed several years of success on the UK metal circuit.

But the five have known each other and jammed together for several years but put music on the back-burner while focusing on getting married, having kids and starting their own businesses. Then in 2017, Rob, Luke and Joe started up a band that didn’t work out, before recruiting Josh and started auditioning for vocalists, which is when Overthrone made its emphatic entrance.

As Joe explains: “Enter James. He rolled into the rehearsal room as casual as you like and as soon as the band started playing, laid down the most brutal vocals we’d heard in a long time. It didn’t take long to decide he was the man for the job!”

With the lineup complete the band set about writing and recording their debut album Evolve or Decay within six months, and released it in September. And the follow-up to that is latest single Omissions, which came out on Monday and it absolutely huge!

It opens up with sinister synth sounds then a huge scream from James brings in stabbing heavy guitars. Another eerie synth sound comes in over the top and drops into a frenetic opening verse of James’ vocals supported by booming guitars. Stabbing guitars then take over and continue under seriously heavy vocals “Forsake hope, Gone forever, You surrendered, Lost in darkness, This is the final purge, This is the end.”

A big energetic verse follows and ends on a huge growl, then the pace drops right down with light vocals then a big drum roll introduces another singalong chorus. It then ends in seriously heavy fashion with James’ huge screamed vocals “As he stands, The noose stares right back, This is the death of all his omissions, The lifeless thought of no hope ahead, The punishment, Witness the end” giving way to booming low-tuned guitars and rolling drums.

On the track, Joe tells us: “Omissions is a hard-hitting track from the get-go. There is a strong message in this song about morals and the consequences. We haven’t beaten around the bush with the lyrics and therefore, wanted to do the same with the music and the production. The main theme for this song is power. Powerful words, music and balls to the wall production.”

The song represents a major step-up in production and songwriting from the band’s debut album. On this, Joe told us: “Although we are proud of every track on that album, we feel that we’ve stepped up our game big time since then. We’ve each found our place within the band and our songwriting is a lot more solid.

“We’ve never been a band to confine ourselves to one style or any rules, but with these new songs, we’ve allowed ourselves even more freedom to let the music do the talking. We put a lot of time and energy into researching producers and studios to record our new music and you can hear the difference from the opening note. The guys at Innersound Audio really brought out the best in us.”

That isn’t to say their first album isn’t good, however. It’s seriously savage, laced with intimidatingly guttural vocals from James and delicious metal riffery throughout. As an example, check out the superb opening track Into The Abyss below:

But, as Joe says below, it’s not purely ‘let’s go as hard and heavy as possible,’ as the band fuse the undoubtedly heavy with moments of melody. A great example of this is the ridiculously good Chokehold and the excellent Forever Frozen, which you can check out below:

Overthrone first began with metalcore being the genre that best spoke to all its members, influenced by bands like Fit For A King, Wage War and The Ghost Inside. Essentially, metalcore that, as Joe puts it, “can go from the most delicate, heartfelt clean singing section into the filthiest breakdowns you’ve ever heard.”

And on what inspires their music, Joe tells us: “We find influence in all aspects of life and that’s a huge part of why our music sounds the way it does. Whether we’re writing from our own personal experiences or from the things we see in the news, we’re always channelling it into our music. We have never written music and thought ‘we have to sound like this’ or ‘it has to be heavy throughout.’

“We let the music and the lyrics take us and the listener on a journey. If a song calls for open chords and breakdowns from start to finish, that’s what it gets. If it needs clean singing and raw emotion, we’re all about that too.

“Although we never set out to write about a particular subject, one of the main themes that seems to appear in our lyrics is mental health and the effect it has on us as humans. The song Forever Frozen was written about a personal friend of Luke’s who took his own life. We’ve also got songs about current and historical events. They’re not always that obvious but there’s a reason for every word we put down.”

Overthrone are yet another reminder of just how good the British metal scene is right now. And, if you read a recent interview with a couple of frontmen from big British bands, you would be able to tell them that bands like Overthrone are proof that the rock and metal scene is very much alive and kicking.

You can see the mightiness of Overthrone for yourself as they play The Underground in Stoke-on-Trent on Friday (12 July) and The Black Heart in Camden on Sunday (14 July) along with Mask of Judas. They’re also playing in Northampton and Birmingham next month, have two gigs supporting Borders, in September. More info on all their upcoming gigs is here. They’re also planning to get back into the studio before the end of the year, so expect to be hearing plenty more from Overthrone very soon.