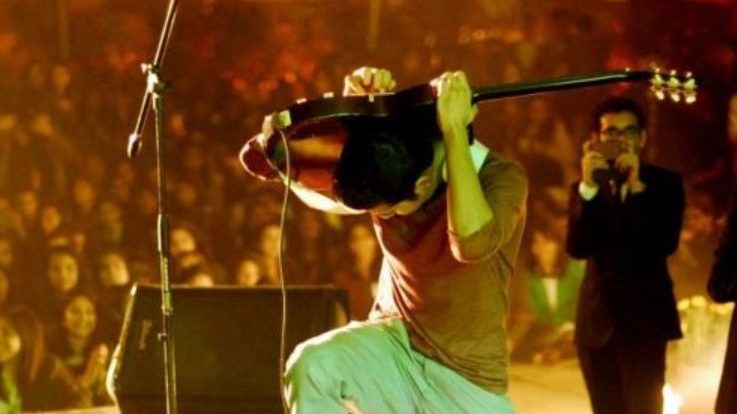 We’ve got something both very different and a little bit special for you today in the form of Pakistan-born rock musician Haider Riaz. Haider, who is currently studying music in the US, uses a wide range of instruments and both western and eastern influences to hone his thrilling, orchestral rock sound.

His latest offering Alien is exactly that – thrilling. The song begins with slow string noises that drop into an edgy opening verse of stabbing guitars and drums under impressive high-pitched vocals. A funky pre-chorus of pounding drums answered by guitar chords support vocals that wind up towards an epic anthemic chorus of big vocals over strings, guitars and drums.

That drops into a lighter verse, with darting strings under Haider’s winding vocals, then a second chorus is followed by a shredding guitar solo that continues in impressive piercing fashion under a big final chorus that finishes on a huge high note.

There’s something a little James Bond theme song about Alien: the choruses are huge, there’s a lot going on with the dramatic instrumentals and Haider’s vocals are seriously impressive. Give it a listen below:

We had a chat with Haider to find out more about him and his music, life in Pakistan and moving to the US. Read on below:

GR: Who is Haider Riaz? And where are you from?

HR: “I’m a rock musician from Pakistan, and I grew up in the city of Lahore. I’m currently enrolled at Kenyon College, a small liberal arts college in rural Ohio, as an international student. I spend my days in class, and nights in a recording studio by myself, throwing all the stuff I have in my head at the computer and keeping whatever sticks, all the while sacrificing sleep and coursework.

“One quick response to a FAQ: my name is pronounced almost just like the female name Heather.”

GR: You just released Alien – sounds awesome. What should people be expecting from the song? What inspired you to write it?

HR: “The central idea of the song is meant to alienate certain people you come across often on the internet, particularly social media, who themselves attempt to alienate and divide others using divisive rhetoric and blatant lies that we’re sometimes too lazy to fact-check. Some randomly derived statistic made up by someone on the internet can form another person’s entire argument (arguments that often seek to further oppressive ideologies), and that scares me.

“Of course, this is not immediately apparent from the song, because the lyrics are very basically worded. I do not make any specific statements about the issue, which is something I could have done, but I think in the end I’m happy with it. I would like to write more specific and mature songs about this in the future.

HR: “Wall-of-sound and orchestral rock. I mainly record with a guitar and midi keyboard. I often try to include brass and strings (MIDI instruments since I can’t afford to get real people to help me out) because I can’t resist adding the over-the-top element to my music. One thing I will say is that while keeping my love of the more grandiose, I do have diversity in the instruments I employ within my songs.

“Of the music I have on my SoundCloud as well as music that is coming up on there soon, I have a song driven by acoustic guitars, another by polka accordions, another by a haunting mellotron flute, one by a marimba and another by Organs. Even though the guitar is my main instrument, I do forego it in half of my music.”

“Musically, I enjoy messing around with a guitar until I ‘find stuff,’ whether this is a chord, an entire progression, or a riff. More recently, I have been trying to work out the lyrics and music simultaneously, since right now the music comes first and then I come up with lyrics after. I have also started trying to compose with MIDI sounds, which is a lot more fun and open-ended.

“Lyrically, it has been a bit random. In addition to Alien, I have a song called You Can’t Please Them All (which is as the name suggests), a song called All The Things You Gave (a song about grieving the loss of someone who could not witness the good things you did in life). A topic I address with a recent song Boxes (which will be on my Soundcloud soon), and one I wish to expand on more in the future, is about how absolutely arbitrary our sympathies are. Restricted to nationality and race even in the most progressive of us.

“Our general willingness to put people in boxes so we can configure the chaotic world bothers me a lot. Somewhere along ancestral and geographical lines we’ve poorly scribbled lines between ‘us’ and ‘them’ and it has stuck. Totally arbitrary. And while I get the importance of that given how long we’ve subscribed to that system, when it becomes a case of establishing worth (in the sense that people within our arbitrary groups have more value to us than yours), it seems very messed up. Alien was an early attempt at confronting fear mongers who play with this idea of “us” and ‘them,’ although in a vague sense. But this is a topic I would love to develop with future music as I mature as a songwriter beyond these initial offerings.

GR: We’ve never met any Pakistani musicians! How much of a rock music scene/culture is there in Pakistan?

HR: “There’s actually been quite a decent rock scene. There have been quite a few rock bands that have captured the imagination of the entire country, such as Junoon, Vital Signs, Noori and Strings. The most famous platform nowadays is Coke Studio, which brings together pretty much most of Pakistan’s most talented musicians, singers and lyricists in reinterpreting South Asian classics.

“Coke Studio does a fantastic job of combining classic rock elements with South Asian classical music, and occasionally western classical as well. While Coke Studio, as well as some of the bands, do have an international outreach, it is not quite as global as is the music of the mainstream global pop culture. That’s probably also because of language differences, although there are some great bands that make music in English, such as Poor Rich Boy and Keeray Makoray.

“Underground bands are also a good way of getting experience, and there’s quite a lot of teenagers forming bands and competing in Battle of the Band competitions in schools (I was in a cover band called The Red Brick Act myself, as the lead guitarist). It’s not an industry where you can make a ton of money and live off of it, but you can find a nice fan-base and people who will actually listen, and big money might come from initiatives similar to Coke Studio.”

GR: And you’re now in the US for college. What’s taken you to the US?

HR: “I came to the US because I think I wanted more options and diversity in what subjects I could study simultaneously, rather than entering a preset field. In addition to that, I wanted a chance to be able to actually study music on the side along with a more ‘practical’ major.

“I eventually decided to become a full-fledged music major here and ditch any silly ideas of practicality, and it is something that is definitely affecting some of my upcoming work. Another thing that I now have access to is a recording studio, which was a big part of choosing a college. Since I’m at a small rural liberal arts college, I am practically the only person at the studio. I spend most of my nights there, recording in complete privacy.

HR: “I have this annoying habit of only being able to focus on a single artist at a time. I zoned in on Queen when I was 12, and they were my first (and only influence) for the longest time – I was particularly fascinated when I learned of Freddie Mercury’s Indo-Persian background. Following this, I entered phases where I followed Coldplay, Oasis, Keane, Led Zeppelin, and I also ended becoming a massive Beatles and Paul McCartney solo career fan at the very old age of 19.

“South Asian classical music also had an influence growing up, as did Bollywood music. Currently, in college, I am influenced very much by centuries of western classical music, hence the orchestral instruments, and increasingly try to make music with some more classically inspired chord progressions.”

HR: “I am currently finishing up mixing on four songs, which are all almost finished. With the three songs I already have on my Soundcloud this would form my first EP, which would be quite a good representation of the diverse music styles I offer. I intend to have the complete EP out within a month, on SoundCloud and all other streaming services.

“My plan after that is to begin shooting music videos for 2-3 singles, beginning to put them out pre-Thanksgiving. For now, three of my songs are available on Soundcloud, and other tracks will be arriving soon! Putting my music out there is an extremely recent endeavor for me, but I intend to take this fast.”

HR: “I compose, write, record and mix all of my music myself, and play all the music – a combination of guitar, midi keyboards and vocals. I’m currently offloading music I had made when I was 16 (I’m 22 right now), and have begun to record more current music. You’ll find a lot of diversity within my music, particularly within the upcoming EP. Check out available tracks on Soundcloud. If you like them, more are on the way super soon!”

Alien is out now along with Haider’s earlier music on his Soundcloud page.