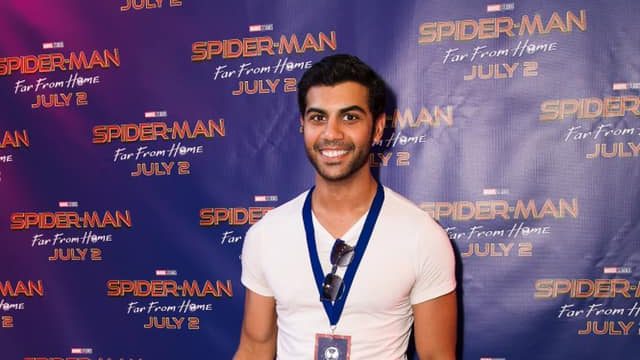 We don’t meet too many solo artists who have a punk-rock vibe, so we were excited to discover Texan singer-songwriter Adam Elara. Adam represents everything that’s good about being a solo artist, in that he has the freedom to mix up styles when and where he sees fit.

For example, the excellent Hey Sarah, from last year’s debut EP Neon Noir, is a fast-paced, classic pop-punk track. While earlier track I Know You Won’t Care has a more laid-back electro-rock, disco feel to it. So it’s safe to say Adam’s music keeps you on your toes.

Adam sent us through his latest single, the catchy Swiping For Love, which was released yesterday (Friday) and again represents the freedom of his musical approach. The track is perhaps a little more poppy in fashion, opening up with poppy sounding vocals over darting synth sounds before a singalong chorus that builds up to a rockier section of “What’s your problem, ‘Cos I got none, What’s your problem now?”

A second chorus gives way to atmospheric section with a little saxophone solo before picking up pace with faster vocals, then dropping into repeat of the previous vocals. Give it a listen in the video below:

We had a chat with Adam to find out more about him and his music. Read on below…

GR: Who is Adam Elara? And where are you from?

AE: “I am actually the one and only Adam Elara, I’ve checked! I was born in Webster, Texas, and since have lived in Saudia Arabia, Pakistan, Uzbekistan, but have mostly grown up between Fremont, CA & Spring, TX.”

GR: You just released Swiping For Love. What should people be expecting from the song? What inspired you to write it?

AE: “Swiping for Love is the first in a string of songs to come out this year! So this was inspired by a lot of bad luck with romance and experiences with online dating. Some really crazy stuff happened so the more introspective thoughts are said in the song and the more extreme comedic elements are in the music video. The music video was a great experience I got to work with my very talented filmmaker friends Khayyam Khan and Andrew Vaughan, not to mention the cast of my runway model homies: Roger De Avila, Faith Washington, Anthony Shane, and Sophie Johnson.”

AE: “It definitely varies from song to song, being a solo artist I get to collaborate with different producers and artists that are very diverse so I try to just bring whatever is best for what I’m working on. In the past, and very much like this song, it’s upbeat energetic music with a sarcastic lyrical twist.”

AE: “I draw a lot of inspiration from my own life or my daydreams, sometimes I like to mix them both. So for example, I get into an argument with someone I might not come up with the best comeback in that moment but later on I’ll think of something perfect and that’ll go in the song. It’s tended to be in the vein of romantic themes and this one is definitely a facet of that I haven’t covered before.

“Going forward though, it’s purposefully going to about things like my experience as a minority in this country/industry and struggles that I feel like aren’t things that every other artist would be able to say.”

“So many, I fall in love with a different artist every month but the classics are: blink-182, Marilyn Manson, AFI, Bloc Party, Eminem, Queen, and Muse.”

AE: “So along with this song is a music video that I’ve been working on for over a year. After that in September I’m dropping my first album Origin Story, which will have a companion comic book that I’ve illustrated as well. It’s been a busy year for me and I can’t wait to share all this stuff I’ve been working on!”

AE: “I love blending styles that normally don’t get paired and put a lot of attention to detail when crafting my music and lyrics. I really hope that these tracks resonate with you and if they do then know You Are Now One of Us.”