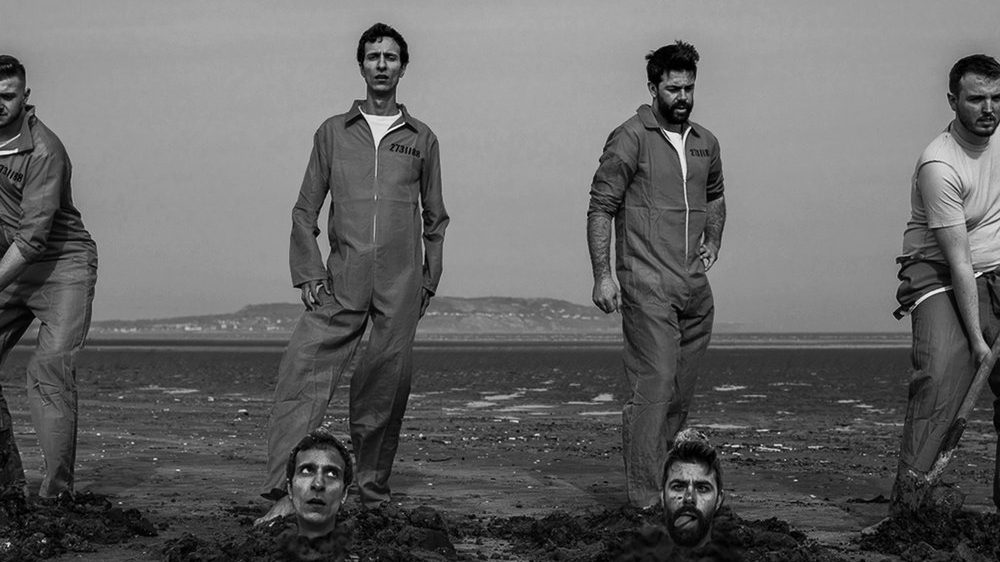 A Brazilian, an Italian, an American and an Irishman walk into a bar… No, it’s not some crappy joke, it’s the formation of intriguing Dublin-based rockers Slim Tin Fox.

The band is formed of American frontman TJ Lynn (rhythm guitar and vocals), Brazilian bassist Arthur Lopes, Italian drummer Justin Capocci, and an Irishman lead guitarist Rob Grehan. Slim Tin Fox released their debut EP last year and are now in a cycle of three new singles in the next three months, kicking off with Molly, which was released on 2 August.

Molly opens up with a little riff then jumps into a lively opening verse led by TJ’s engaging vocals “Good golly Miss Molly I’ve been blind, I’m scrimping by on others’ time,” with fun riffs answering him. That feeds into repeats of “Take Molly have a good time,” with shouted backing vocals and bursts of guitar throughout the chorus.

The second chorus drops into rolling drums and drawn-out guitars then jumps back into a final blast of the chorus. It’s short, sharp and lively with plenty of lively rockiness to get your teeth into. Give it a listen below:

We had a chat with the band to find out more how this all came together. Find out more below…

GR: You’ve got an interesting international line-up. How did that come about?

STF: “TJ moved to Dublin in 2016, where he met the guys on a musicians networking site. Arthur had been longtime friends with Rob and searched for a vocalist/songwriter and drummer to complete the band in early 2018. Miraculously, TJ didn’t finish his profile on the musician networking site when it asked him to pay for it – but somehow Arthur was still able to find him and contact him.”

GR: You just released Molly. What should people be expecting from the song?

STF: “We’re really excited to work with Animal Farm, a label in London that is helping us to release a few songs. Otherwise, we wouldn’t know what to do with the songs we recorded!

“The song is inspired by old school rock and roll, it brings back that energy, that raw instrumentation, that rock used to provide before everything became digital. It’s a fitting song for a fast drive on a long highway. The song is inspired by the fading effects of a drug-induced night out; the morning after: ‘Take Molly have a good time, and then she’s gone, then she’s gone.” Chasing the afterglow of an evening, but realizing it’s just a moment and it’s useless to try and capture it forever. But that’s what drugs are. They’re a feeling in a bottle.”

STF: “It’s energy above all else. It’s hard being in the recording studio to capture the energy we have in a show so I encourage people to come to check us out in person. Fast-paced, in your face, right in your grill, banging on your teeth, twisting on your nipples, choking on your tongue rock and roll.”

STF: “We’re inspired just by general life, past experiences and personal storytelling – we don’t care to be well known or ‘fame,’ we just want people to hear what we’re putting down. We want to make people move – and because life entails people moving on their own; we want to harness that motion and influence movement.

“Our songs deal with relationships, drugs, heartbreak, Buddhism, societal expectations, dropping out and tuning in, tuning up and telling your parents to suck a dick.”

GR: We’ve featured a few Irish bands on the site. What are your thoughts on the current rock / general music scene in Ireland?

STF: “There is always support for bands to try and express themselves on the Irish music scene. The current scene is not as strong as it used to be 10 years ago but as a band, we are trying to revive the scene and bring it back to the way it used to be.

“The current music scene in Ireland in terms of playing rock and roll is very small, which makes it easy for new bands to mix with other musicians and to play shows. Getting exposure and potentially making the big break on the Irish music scene is very hard, even if you are a really good band, but the possibilities to play shows, express yourself and showcase your talents is second to none for any type of music that you are playing.”

STF: “In terms of the type of music we play, we are heavily influenced by past rock, grunge, heavy metal, and punk rock type bands. Bands such as Nirvana, Slipknot, White Stripes, Metallica, Kings of Leon, Neil Young, Iggy Pop, The Strokes, Billy Talent, Interpol, Modest Mouse, and Radiohead. In terms of smaller bands on the scene that heavily influence us are the likes of Yonaka, Empathy, Scuba Dice, Slay Her Too, Chewing on Tin Foil, Jody has a hitlist, Felim, and Mclusky.”

STF: “We’re releasing a new single every month for the next three months, starting with Molly. We have a gig at The Workman’s Club on 13 September with Felim and Empathy. We just had an hour set at the Sin E club, so we’re wrecked! Big thanks to the promoters Fluttertone and Demars Presents. We’re gonna keep gigging and writing – we’ve got a huge backlog of songs we’re gonna get in the studio and record. It’s going to be a very active end of 2019 and 2020 for us so stay tuned.”