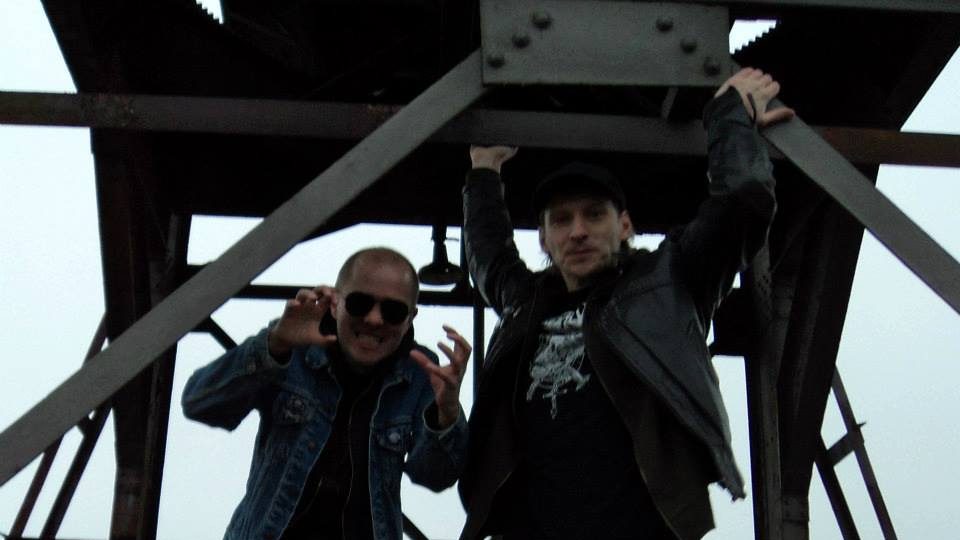 Fusing the energy and power of punk and thrash is always to be a winning combination, and the intense sound of Swedish rockers Germ Bomb proves that sweeping statement.

The Gothenburg duo of Hampus Kuylenstierna (vocals, guitars, bass and horns) and Pierre Ohlsson (drums, iron and screams) formed after the punk rock band split up and morphed their thrash and doom influences to form an exciting new sound.

The band sent us a track called Dogs From The Wasteland that was actually on their debut album way back in 2010. Now, we’re a blog about new bands, but this song is still well worth giving a shoutout – mainly for the fact that it nearly burst my eardrums when I had the volume turned up far too loud at the start of the track.

It begins in unmistakable fashion with the huge sound of an Air Raid Siren, which continues over lively guitars and pounding drums then fast-paced vocals in a rapid opening verse. Give it a listen below (and remember, check the volume before hitting play…):

Moving onto their more recent music, the band released latest album – their fourth – Gist Sucked Out back in March. It begins superbly with Siberia Wasteland, which opens up with drawn-out guitars then picks up pace and launches into an angsty opening verse. Check it out in the video below:

The album is packed with thrashy rocky goodness but our favourite may well be the near seven-minute-long closing track Asfalt – which, incidentally, is the only track on the album that’s in Swedish. It opens up with a cool opening riff then a high-pitched guitar imitating it alongside rolling drums. Powerful vocals take over and drop into big guitars and crashing cymbals, and the track generally brings the album to an intense ending.

We had a chat with the chaps to find out more about the band. Read on below…

GR: Who are Germ Bomb?

Pierre: “Well, it’s me on drums and Hampus on vocals and guitar (also bass in studio). We started about 10 years ago when the bass player in our former punk rock band Hathor quit. We were pretty fed up with everything and had to restart in some way and Germ Bomb was born.

“As in our previous band, Motörhead and GBH were a big influence but also metal bands like Toxic Holocaust and Celtic Frost influenced us this time. Since then we have released four full-length albums and two splits with Brasilian Whipstriker.”

Hampus: “Pierre and I started to play in different bands in the mid-90s and we were listening to a lot of Swedish punk bands but also thrash bands from all around the world. Finally we started our first real band “Hathor” with our friend “PK” on bass, who also helped us out on stage with Germ Bomb. Jesper Viktorsson (Omnizide) has joined us recently on guitar on a couple of gigs.”

GR: You sent us Dogs From The Wasteland. What should people be expecting from the song and your new music?

“I sent you the song Dogs From The Wasteland because I think it’s a really good song with a cool blend of metal and punk with lots of energy. But it’s an old song, it represented us pretty well at the time for our debut album Infected From Birth, and we will probably always feature it in our live set. Inspiration for the song came from the apocalypse, movies like Escape from New York and Mad Max were a big influence too.”

Pierre: “People seem to have problems putting us in some music style category and we really don’t care about genres. We listen to a lot of different music, maybe that’s why we’re so hard to categorize. As Lemmy said: ‘We play rock!’

“Our debut album was pretty much fast ahead metal punk but I think we have evolved. We try to incorporate different influences, with that said we have a background in heavy punk, rock and thrash music but we mix it up with industrial and darker stuff.”

Hampus: “Life and death and everything in between!”

Pierre: “Most themes for songs are about a world in decay, the greed of mankind and we will eventually destroy ourselves. We don’t care for politics that much, we think they are corrupt! They probably won’t change because society will always be rotten and unjust.”

Hampus: “We have a few things coming up in the fall, we will record a couple of songs for an upcoming 7″ split and a few gigs are in the pipeline.”

Pierre: “Thanx for having us… ‘Rock n roll is the only way!'”