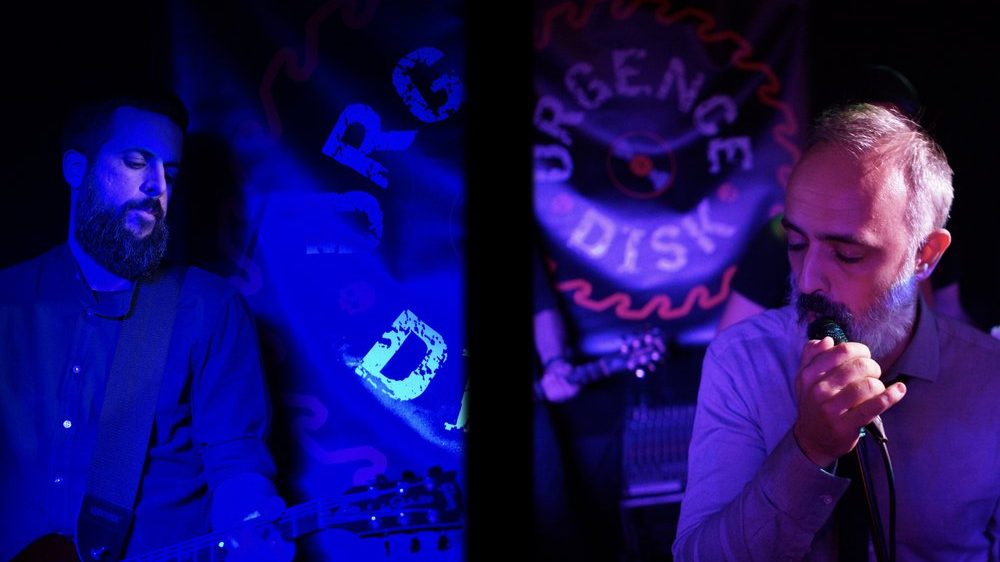 Rock music and scientists aren’t necessarily the most obvious companions, but Switzerland-based Greek duo Haneke Twins go to show that you shouldn’t judge the scientist by their lab coat.

The pairing of Stefanos Leontsinis (guitars) and Paschalis Vichoudis (vocals and bass) met while working on experimental physics at CERN, joined a couple of cover bands together, then set about writing their own experimental music. They’ve since honed a dark post-punk style that conjures memories of bands of the ilk of Interpol.

This comes to the fore in Deep, the opening track of the duo’s 2018 debut EP. It opens up with lively guitar and bass then a higher-pitched guitar lick takes over and drops into Paschilis’ captivating vocals. Livelier guitars kick in and the vocals intensify then lingering high-pitched guitars and little bursts of guitar drop into another verse.

A jaunty, enjoyable prolonged section of darting guitars and a lively bassline bring the track to an end. Check it out in the stream below:

That’s followed by Climb, which opens up with a lively guitar riff that continues over a wandering bassline, then a high-pitched repeating guitar sound jumps in over the top. The lively instrumentals continue under the incoming vocals, through to a brief pause for breath towards the end, before ending with a big rocky outro featuring more funky synthy sounds. Give it a listen below:

It’s a really cool EP that closes out with a brief rendition of The Doors’ The End, which you can listen to below.

We had a chat with the duo to find out more about this intriguing band. Read on below…

GR: Who are Haneke Twins?

HT: “Haneke Twins is a musical project founded by two Greek scientists and multi-instrumentalists, Stefanos and Paschalis. We met about 10 years ago at CERN, the European Laboratory for Particle Physics in Geneva, Switzerland where we both worked on experimental physics.

“After playing together in a couple of cover bands, we felt the urge of composing our own music and we started experimenting with some ideas we had. And apparently it worked quite well ⁠— not a surprise since experimenting is what we do for a living anyway!”

GR: You just released Deep. What should people be expecting from the song?

HT: “Deep is a blend of haunting baritone vocals, eerie but catchy guitar licks, a captivating bassline and explosive drumming, resulting in a ‘Bauhaus/Joy Division meet Interpol’ song taking you back to smokey underground clubs of the 80s. The lyrics are based on a poem by Stathis Antoniou, a contemporary Athenian poet, dealing with the psychological quest deep inside one’s subconscious.”

HT: “Our first EP has a very diverse sound from track to track, as a result of experimenting with different styles. Deep and Climb have a clear dark-wave/post-punk revival feel, while Drive inclines towards post-rock paths, Lost blends various styles ranging from haunting indie-alternative to punk and thrash, while The End – our take of The Doors’ classic ⁠- is a revisited 70s tune in an unexpected tempo, sound and duration.”

GR: Sounds fascinating! What influences you to write music? Any key themes or topics that you write about?

HT: “There isn’t a standard recipe or method we follow in the songwriting process, nor discrete roles. Interestingly enough, we often find ourselves in ‘inverted’ roles; Stefanos, ⁠the guitarist, writing lyrics while Paschalis, the vocalist, writing music.

“One thing we always keep in mind, though, is to avoid clichés and produce a distinctive and fresh sound, probably at the expense of not being friendly to everybody’s ears. The use of unique guitar effects by boutique companies such as Big Ear Pedals and Red Panda contributes heavily to our songwriting since they often produce unexpected but extremely inspiring sounds. Concerning the lyrics, they are mainly dealing with social and psychological subjects.”

HT: “Our strongest influences come from post-punk, dark-wave and post-punk revival artists, such as Joy Division, Bauhaus, Interpol and Editors just to name a few. We shouldn’t forget our influences from a couple of iconic Greek bands from the same era and genre, i.e. Mora Sti Fotia and Trypes.”

HT: “There are a few gigs lined before the end of the year but our main focus is to record our EP with seven brand post-punk revival compositions. The EP is expected to be released in the beginning of 2020. For presenting our new material, we are planning a mini European tour with the help of three very talented musicians joining us for live performances in Giannis Koukovinis (guitar), Thanasis Kyritsis (bass) and Michael Schenk (drums).”

HT: “We are an independent unsigned band but our passion to create music overcomes the huge difficulties in promoting our material. Many thanks to your blog for giving us the opportunity to introduce our work to the world. Support unsigned artists!”