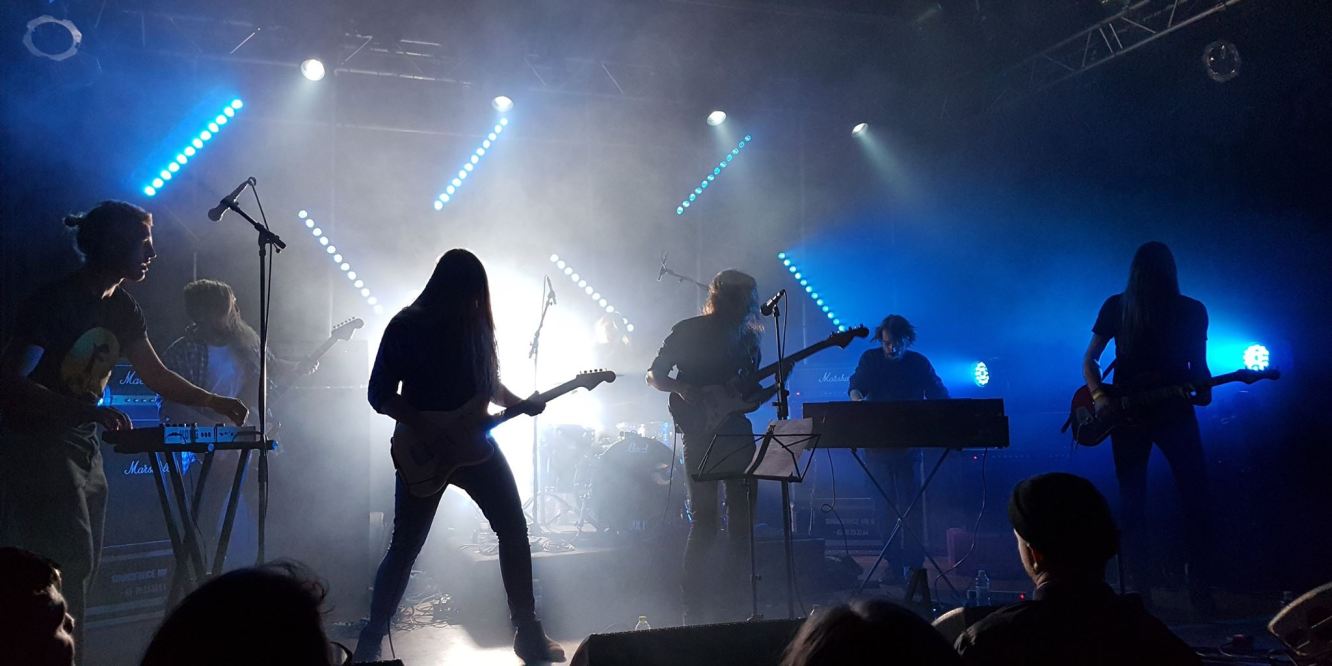 Danish project Heathe is far from your ‘usual’ rock band. For starters, it’s not a band as such, more a collective of liquid band members built around one constant, Martin Pale. Second, they’ve released a couple of epic tracks laden with stoner rock, droney doom goodness that has a largely improvised feel to it.

Martin’s description of how Heathe’s music comes together tells us a lot about their intrigue. He explains: “I try to have a weekly sit-down where I just fuck around with stuff, and then sometimes what comes out of that feels like Heathe.”

It opens up with a creeping guitar and guitar noises gradually edging in. Wild screamed vocals suddenly appear from nowhere over stabbing guitars, which drops into a big mass of stoner instrumentalism. A second batch of screamed vocals gives way to a more prolonged instrumental section, with high-pitched echoey guitar lick taking the lead over a big supporting cast.

It all drops out bar a stabbing low guitar sound and drums then big echoey screams kick in over the top. That gives way to a siren-like repeating guitar over the intoxicating stoner instrumental as the track builds up with piercing bursts of guitar. That takes us through to an intense ending with the incessantly heavy guitars supporting a wild lick over the top. Give it a listen in the live recorded session below:

And you can check out its predecessor in the stream below:

We chatted to the man himself Martin to find out more. Read on below…

GR: Who are Heathe?

MP: “Heathe is a musical project started in Aalborg, Denmark, in 2016 by me as a one man outfit. I went to my rehearsal space to work on another project, but what came out of that was shit. To clear my mind I sat behind a drum kit and recorded the same beat for 20 minutes, and a few hours later, the first Heathe track Despair was there. I immediately got immersed into this way of working. I remember staying at my rehearsal space for a week straight recording that demo, having fever and drinking loads of red wine.

“A few months later, tweaking knobs and having it lying around, I put it out as a cassette and immediately got offered some gigs. It was never intended to be a band or even a thing. It was meant to be that demo and then nothing else really, but I also wanted to experience what potential the music had for being played live, with the touch of others than myself. I got together a group of friends from crazy different musical backgrounds, and we played a few shows with different lineups. Still, to this day, there is no fixed line-up. It changes from show to show, even though now there is a core of people who’ve been in from the beginning.

“We released our debut, On the Tombstones; The Symbols Engraved, in June 2019 by German DIY-label Wolves and Vibrancy. The album consists of one 40-minute song, where we venture from slow pathos-laden droney doom to staccato-noise and hypo-rock which at times almost resemble hip-hop. I composed the skeleton of the album, but we recorded it live over the course of three days in August 2016, where we would get into a venue we borrowed, nine of us, get in a circle and jam it out. So it’s got an improvised feel to it in places, which I really like.

GR: You just released On The Tombstones; The Symbols Engraved Pt 2 – it sounds awesome. What should people be expecting from the song?

MP: “So the second part of On the Tombstones… is the B-side of the album. I don’t know if people should expect anything, really. It was recorded some time back at Tapetown studios in Aarhus, and it was a really intense day, I remember. Two days prior the going into the studio I split with my girlfriend and had basically just left my house to stroll around and couch surf.

“When we recorded this I hadn’t slept for days, the studio was insanely warm, we had to stress it a little and it was just all very permeated with anger, which at the moment wasn’t that enjoyable, but I think it left a mark on the video that otherwise can’t really be forced out.

“I’m not sure what the song is inspired by. The idea of the music came from an old music project of mine from back in 2012. I basically took that and rearranged it. The lyrics are about finding oneself in a dark time of life and crawling your way out of it.”

GR: How would you describe the Heathe sound to people that haven’t listened to you yet?

MP: “Loud, massive, repetitive and noisy. It gets beautiful at times.”

MP: “People and their shitty behaviour towards our planet and each other. The lyrics constantly shift from the really personal level and the bigger picture. I will usually improvise them out by composing the tracks and then instantly write while playing them back. This way I just spit out shit that wants to get out.

“The music, I have no clue where it comes from. I try to have a weekly sit-down where I just fuck around with stuff, and then sometimes what comes out of that feels like Heathe. Sometimes it doesn’t, and then I’ll save it for something else. But usually, when I make something that feels right, I will immerse myself into it for days. Not be able to work or hang out with other people, but just be really really into that thing, and not able to leave it before I think it’s done. It’s nice to be in that flowy process, but also really exhausting.

“I guess anything influences it really. Politics, religion, the people close to me and far away from me, nature, stuff I read and such. Of course other music as well.”

MP: “Swans is a definite one, and also the project Sol by Emil Brahe I was listening to a lot when I first got into heavy music. But mostly I listen to folk music from around the world, jazz and more experimental electronic music. Music takes up a lot of my time. It’s basically the only thing I think of, so I get around a lot.”

MP: “We’ve got some shows the next months, but other than that we will be working on new recordings and hopefully have an album coming out some time next year. I’m not gonna stress it though.”