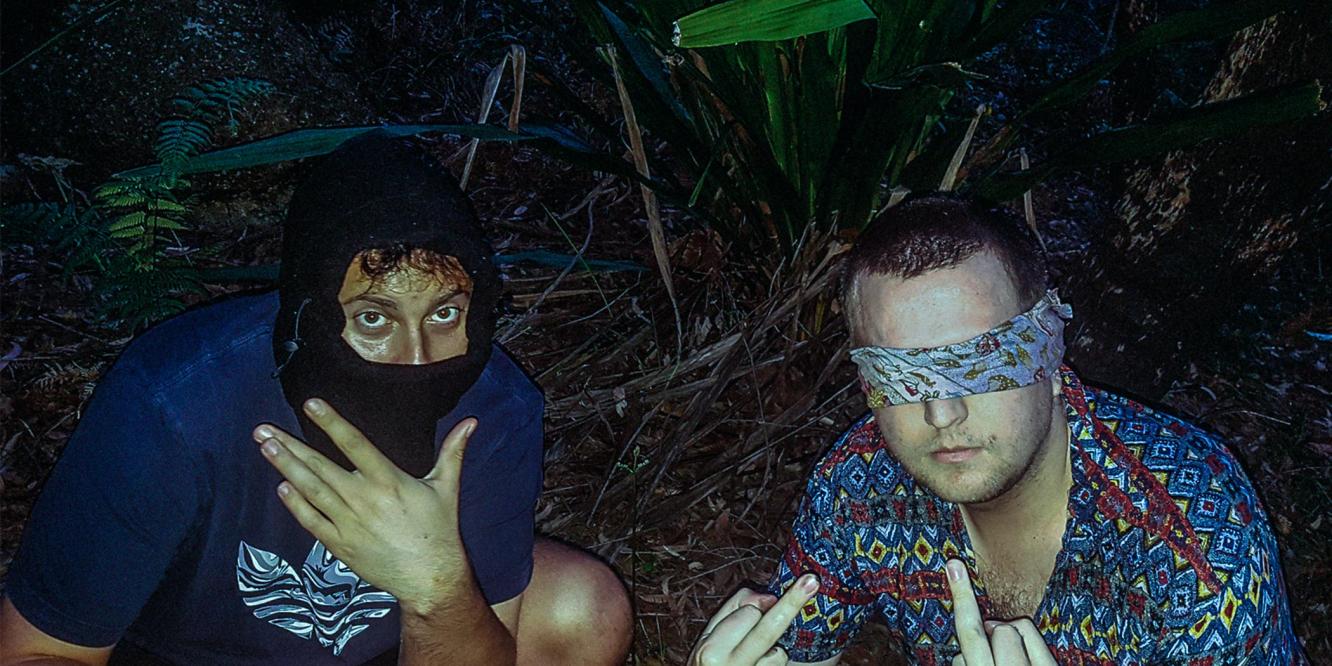 We’re not really sure where to begin when Newcastle, Australia, duo Skitz NPCs regularly refer to themselves as “the Semen Wizards.” Do wizards conjure up semen-based spells? Frankly, we think we’d be safer never finding out.

What we do know is that co-wizards Dyland and Nash met around a decade ago while playing in separate bands – one of which, to quote the other band member, “was progressive wank garbage.” The duo then formed another band called Blind Oracle which, again in their words, “parted ways in dramatic circumstances due to drug-induced mental illnesses, albeit at different times.”

Skitz NPCs then came about when they ran into each other at a music store about a month ago. As Dylan tells us: “Nash, who is now primarily a bassist and co-vocalist on the project, then made this bass repair completely pointless as we began writing several days later and formed the Skitz NPCs.”

So what to expect now? Well, if debut track – yep, you guessed it – Semen Wizards is anything to go by, pure heavy madness seems about apt.

It opens up with a spinning bass and hits of mega low-tuned guitar then wild screamed vocals smash over heavy bass and guitar. Little flurries of high-pitched guitar come in alongside pounding drums amid atmospheric fast-paced guitars and more screamed vocals.

It drops into lighter guitar with spoken vocals “I did crack a few times, Touched my own dick,” then lighter higher-pitched vocals “We are the semen wizards, We’re coming on your face.” Pretty crazy stuff but we kinda love it at the same time. Check it out below:

On the track, Dylan tells us: “Semen Wizards is a song which derives itself from our polar opposite approaches to semen and how it makes us powerful. I myself believe in semen retention, and Nash believes in ‘permanent post-nut clarity.’ He will often visit ‘the hookers’ before a writing session and I will ensure that I have not lost any of my juice before writing.

“The sound of the song is simply to say ‘We’re back,’ after many years of our acquaintances believing we were possibly ‘skitz.’ The name of the project derives from this, as for a long time we acted in the world as NPCs (non-playable characters) but now we are set free, possibly referencing Agent Smith in The Matrix, where his own death becomes his own newly acquired awareness.”

Indeed, the duo’s shared mental illness and addiction problems play a dominant part in Skitz NPCs’ music. As Dylan says: “We try to come at that angle but not in a ‘we’re so sad and hate life’ approach, but the approach of writing for others to find enjoyment and wisdom through our experiences.”

Musically, Dylan takes inspiration from the likes of Tosin Abasi, bands like Tool and Radiohead who push rhythmic and harmonic boundaries, and more current influences JPEGMAFIA. While Nash prefers “balls to the wall” slam, metal and heavy music and bassists like Victor Wooten and Evan Brewer.

And on their heavy sound, Dylan explains: “At face value, you would need to expect Skitz progressive metal which isn’t ‘djent’ but more so a compact version of the old school 12-minute prog songs many fans enjoy. We try to cram in as much content as we can to our music to make it exciting, but then underneath we allow the listener to laugh with us on our journey of being Semen Wizards, while finding the clues to the true meaning behind our music.”

You can expect plenty more where this has come from as the duo are recording relentlessly, which will culminate in a “two track taste,” followed by more singles and an EP.

And as Dylan adds: “We are entirely self-produced with no assistance in any element of our art, so we just create until it works and we will share it. We are planning to write music, create content and go as far as we can on the internet before we begin to perform live.

“We are the Semen Wizards. Please help us on our journey to become the biggest Semen Wizards in the world. If you enjoy our antics and our art, follow us on Facebook as we post a few videos a week of our Skitz NPC behaviour.”

One Reply to “Discover This: Skitz NPCs”