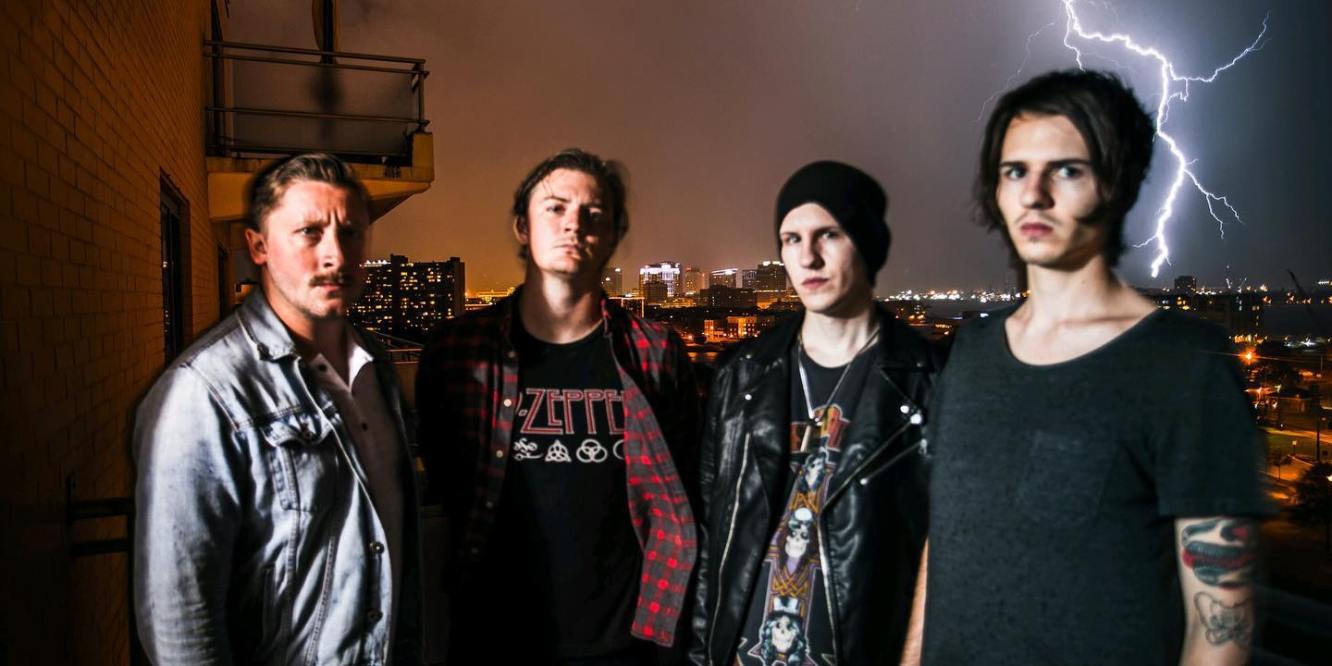 Virginia Beach rockers Dead Friends aren’t ones to pussyfoot around their music with grandiose claims. As they tell us: “We just say ‘rock.’ If people ask us to elaborate we say ‘heavy rock.’ If that’s still not enough, we explain how heavy our rock is.”

That simple description is all you really need to know, but we know we should probably elaborate a little. The band have concocted a wild, screaming juggernaut of thrilling metal-fused heavy rock intensity. How’s that?

Dead Friends began life as the solo project of frontman Austin Radford, who wasn’t sure whether to pursue his career in music or head down another path. Luckily, he stuck with the music then completed a full band with brothers Christian and Brian Zawacki and Dan Worrell. They set about writing together, released their debut EP in 2017, then released three singles last year, of which two were produced by Will Beasley (Asking Alexandria, Emarosa), which suggests they’re standing in good stead.

The band sent us one of last year’s releases, Torches, to help us get a taste for their heavy, infectious sound. It opens up with a big drum roll then lively guitars join the party and continue into an edgy opening verse. A spinning little guitar feeds into a singalong chorus with driving drums supporting the vocals “Wear me out, There’s magic in the separation that’s closing in, So bury them, Too far below to see these faces, These torches, these torches, Don’t show me anything.”

A second chorus sees the pace drop down with high-pitched vocals building up to a big cry of “But we’re built to give up control” and a huge smash of heavy guitars then a final blast of the chorus. Check it out in the video below:

And there was more heavy goodness coming our way this year with latest track Cis White Whale, the first single from a new EP due out in January. It opens up with lively guitars and fast-paced vocals. A big bouncy riff kicks in under shouted vocals “Shallow roots, These abandoned veins still pump the same dust, This aborted art is all you’ve got,” then a spinning guitar feeds into more shouted vocals. It’s fast, heavy and unrelenting, and you can check it out in the video below:

GR: Who are Dead Friends?

DF: “Originally a solo project, Austin wrote the first Dead Friends single, and was introduced to Christian as a session drummer. The two hit it off and decided to add Austin’s long-time improv buddy Dan, and Christian’s brother Brian.”

GR: You sent us Torches. What should people be expecting from the song? What inspired you to write it?

DF: “Torches is the third single we released in 2018. The inspiration for all three singles was the idea of beginning this new musical endeavor. Questioning whether we were equipped to start from scratch. Accepting all of the bullshit that comes with being a broke, lonely musician. Torches specifically deals with how/where we as individuals find our identity. It’s also just a banger. Christian’s drums are absolutely bonkers throughout.”

DF: “We just say ‘Rock.’ If people ask us to elaborate we say ‘Heavy Rock.’ If that’s still not enough, we explain how heavy our rock is. At this point the record for the heaviest rock anyone’s been able to handle is held by Brian Shaw at 733lb. At our heaviest we’re at roughly about 450lbs. That’s still too heavy for most people to handle. At our lightest rock is probably 15lbs or so. My mom can handle that rock, no prob.”

DF: “Our new EP, coming out in January 2020 is mostly influenced by the various ways that a person can betray themself. Whether it be by their brain, their past or a myriad of other things. So to answer your question – mushrooms.”

DF: “We all have different influences. From The Beatles to Every Time I Die. From Gregg Allman to Glassjaw. The only thing we agree on is that Country is unbearable.”

GR: I think we can all get onboard with that. What have you got coming up through the rest of 2019 and into next year?

DF: “The first single from our EP High, Wasted Gene will be coming out on October 18 on Standby Records. If you’re reading this after that date (Editor’s Note: you are), go look up our music video for Cis White Whale. We also have an East Coast run of shows slated for December, so check our socials for that info.”

DF: “Our favorite movie as a band is Batman Forever. That’s literally all you need to know.”