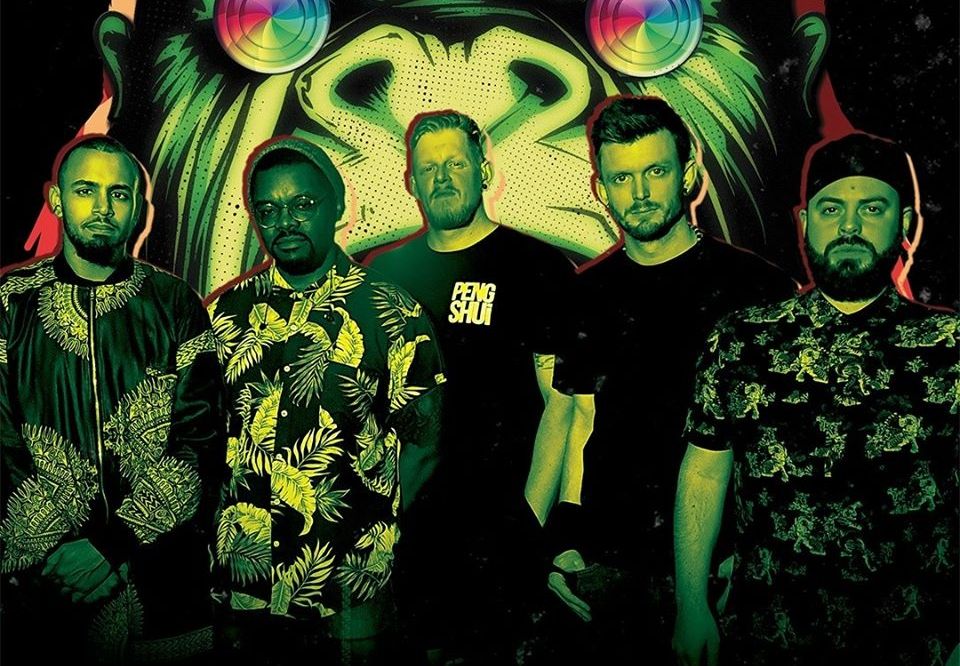 Lock your doors and seal the windows because there’s a monster on the loose. This particular monster is an obnoxious, outrageously loud down-tuned, intense lyric spitting breed that seamlessly merges the sounds of raw, guttural grime, punchy hip-hop and metal.

ASKARI, led by the distinctive vocals of frontman Asher Baker, are a band that pulls no punches and are on a mission to throw, in their words, “walls of sound around any size venue and spitting vitriolic lyrics squarely in the face of absolutely every fucker ever.”

The quintet – completed by Liam Carroll (guitars), Aiden Baldwin (drums and samples), Archie (keys) and James Routh (producer, musical director, baritone guitarist) – present us with vocals containing elements of grime, hip-hop, slam poetry and rap against a backdrop of heavy metal and dance instrumentals that the band summarise as “on the spectrum.”

As frontman Asher explains: “We try not to pigeonhole ourselves, because we’ve never been worried about what type of music we make – about whether it ‘fits into a genre.’ We tend to write around the lyrics, so there are strong elements of slam poetry, grime, hip-hop… a lot of storytelling punctuated by word play and punchlines.

“Combine that with the heavier, down tuned metal from bands like Slipknot or Dillinger Escape Plan and dance vibes from Major Lazer or Pendulum, and you’re getting close. Think heavy, melodic, nu metal rap. Plus Whitney.”

Our latest taste of this is third single Phantom, which lures us deeper into the darker, heavier side of their songwriting and really showcases their ability to seamlessly merge multiple sounds and styles.

The lyrics are strong, angsty and outspoken and we’ll largely leave them for you to discover yourself, but a particular personal favourite section is “I don’t pay rent, I ain’t got debts, The bailiffs don’t come round no more to make threats, You won’t see a fat chain adorning my neck, Daytona, Rolex or AMG Spec, I’ve gone from homeless to shelling down sets with a Roland SPDSX.”

The track opens up with twinkling synth sounds over a repeating bassy synth sound, which continue under Asher’s opening vocals. Guitars and drums suddenly jump in as Asher’s vocals continue, then drops back into a second verse that begins “Probably foxes fucking, A couple out clubbing, Walking into a mugging.”

The second verse again builds up with drums and a building synth sound. Then the line “Askari on a fucking mission” ushers in a big chorus of cries of “Stand and deliver, Hand on the trigger, Gunpowder riddim” over big synth sounds over drum’n’bass elements and big guitars and drums. It’s pretty damn huge.

It drops back into another verse, containing the lyrics we picked out above, then a building synth sound drops into an extended chorus that brings the track to a heavy ending. Check it out in the video here:

On the track, Asher tells us: “That would be telling! Let’s just say Aiden and Archi play an absolute blinder on this one. Phantom is based on true stories about growing up in South East London, and the insurmountable struggle to get out of the ends and do something awesome.

“It’s really dark. We wanted to reflect the ominous danger of the lyrics in the music. It’s grim, it’s sinister, it’s explosive… I think it’s the best thing we’ve done so far.”

The song was produced by James, who’s previously worked with Sonic Boom Six and The Karma Party and who Asher credits major credit for the band’s development. “I’ve been working with James for years on other projects,” he told us.

“We got together in the studio to create some new bangers in the Summer of 2017, and once the demos were done, it was just the very minor matter of getting a band together. That was all James, he did all of that. Assembled the best and brightest musicians in all the land to enable and empower my lairy vitriol.”

Phantom follows previous track Progress, which we also love the sound of. It’s also dark in its own way, with a sinister repeating synth sound under Asher’s rapid, breathless vocals. Dancey drums kick in then huge low-tuned guitars kick in to launch us into a catchy chorus. Check it out below:

While debut track Move presents a completely different side to the band, with a more mellow vibe as the focus shifts firmly to Asher’s lyrical excellence. The track presents a second-generation migrant’s view of London’s multicultural melting pot, touching on examples of socioeconomic strife such as the Brixton race riots and the shooting of Jean-Charles de Menezes.

It opens up with the line “I grew up in a council flat next door to the National Front, It wasn’t ’til I was six years old I realised they were racist cunts,” which gives you a taste of what’s to come. Give it a listen below:

Unsurprisingly, the band’s musical influences are hugely diverse. Asher grew up on reggae, jungle, ska and Motown, before being introduced to everything from Bob Dylan to Wiley. James’ favourite album is Morning Glory by Oasis, Liam loves Rage Against The Machine, Archi is a big jazz enthusiast, while Aiden listens to the likes of Loathe and Sleep Token. And they’ve created a playlist to answer this question of influences.

Instrumentals aside, it’s impossible to look past the lyrical focus of the band. Asher tells us: “I’ve been a poet and an historian since my school days. I always try to use both of those skills to tell stories about stuff you don’t normally hear. We grew up with poverty and gangs and drugs and guns and all that, but there’s a plethora of bands and artists writing about that stuff.

“Being mixed-race in a working class racist part of South London, raised by a single mum with two sisters and no blokes meant nobody told stories I could relate to growing up. Stories like mine weren’t as popular or widespread. I decided to write the stories I wanted to hear – I figure there are more people like me out there who need to hear them too. Plus, the tunes are strictly bangers.”

We can only agree with Asher that ASKARI only deals in bangers and we’re looking forward to hearing more from the band. They’re always working in the studio and promise us plenty of new music, and new merch, soon. You can also see the band for yourself as they head out on tour from Friday (21 February), kicking off at Crowleys in Hastings. They’ll then be playing The Latin Groove in London on Saturday (22 February), followed by The Lab in Northampton on Sunday (23 February).

The tour moves north next Thursday (27 February) as they play The Parish in Huddersfield. Then they’ll be at Kasbah in Coventry next Friday (28 February) and Bootleg Social in Blackpool next Saturday (29 February).

They also have dates next month, starting at Kanteena in Lancaster on 1 March. Then they’ll be at Krakatoa in Aberdeen on 27 March, LS6 in Leeds on 28 March and Star & Shadow in Newcastle on 29 March.

And if you like what you hear then get involved. As Asher says: “We’re always on the look out for enthusiastic new fans. If you think you’d be a good fit, email your credentials to newfan@askari.fm for consideration.”

One Reply to “New Band of the Week: ASKARI”