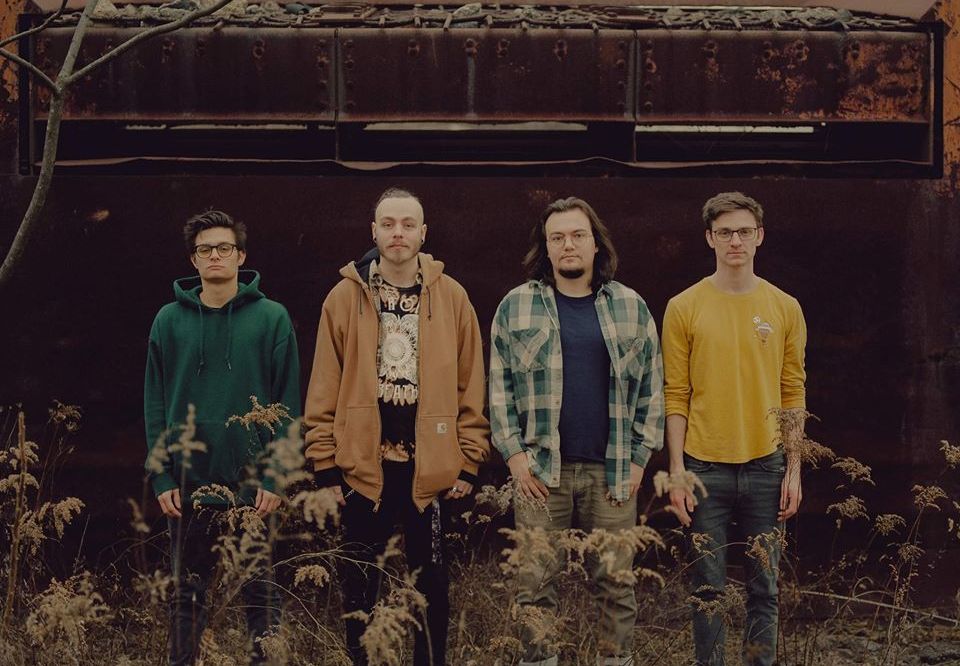 Pittsburgh band Second To Safety make an interesting observation that their home city, famed historically for steel and blast furnaces is now a booming health and medical centre. The band’s Facebook page notes: “It’s somewhat ironic that a city once hidden behind clouds of black, sooty industrial smoke has become a leader in cancer treatment.”

Such observations are plentiful from a band that epitomises their city’s complex, contradictory landscape. The art-punk rockers provide music that mirrors the societal issues that influence it, such as nature and industry, labor and capital, and politics and spirituality.

Indeed, the contrasts between these topics are reflected in sharp shifts between harsh, frenetic moments of noisiness and intricate, delicate melodic moments – and even bird song.

The band themselves summarise it as a cinematic offering of indie punk infused with sprawling elements of prog. Or, in their words: “like if Radiohead came out of the 2010s emo-revival instead of the 90s indie-rock world.”

Either way, to return to the issue of medicine, one could diagnose the band as the musical definition of a split personality. Their debut album was very much math-rock in approach, then 2018 EP stepped a bit more into the pop-punk ballpark. So now, with the release of album two Esther in February, we weren’t really sure what to expect.

However, we were not disappointed by an album that fuses screeching guitars, intense vocals and emo-infused rock. Epitomising this sound is its excellent opening track Signs of Life.

It opens up with light guitars and the aforementioned bird song, which continue under high-pitched vocals “starting off the same way it always used to be, Looking down the train tracks, abandoned factories, Broken glass and shards reflecting light into the seams, Stitching demons in the doorways and demons up their beams, Cue belief.” The vocals pick up alongside a looping guitar lick, beginning with the line “Or rather disbelief I guess.”

Everything drops out bar a palm muted building guitar under the vocals “There are no signs of life here, I guess I have to blend in,” then faster flickers of guitar give way to another verse. That drops into lone vocals, then huge screechy guitars come in and build into big screamed vocals as the track suddenly goes very emo/post-hardcore. Then big cries of “There are no signs of life” give way to heavier guitar chords and backing vocals. Check it out in the video below:

While To Be Beautiful is, as the track suggests, something beautiful and atmospheric. It opens up with cool high-pitched guitars and echoey vocals then explodes into a big singalong chorus. A funky little riff cuts in then drops into another busy verse that feed into another chorus led by the vocals “Just wanted to be beautiful, Just wanted to be part of something bigger than me, But how was I supposed to know, That the highest of highs, Bring the lowest low out of me.”

Stabbing guitars take over then fall away into a light synthy sound that continues under light vocals. Chugging palm-muted guitars kick in and build the intensity towards an explosion of intense vocals and a big final chorus, alongside a cool little guitar solo. Give it a listen below:

And the album goes out in style with the epic, but excellent 12-minute long Copperhead, which you can listen to below:

The album is filled with these moments of intensity counteracted by calm and melodic sections. It’s an excellent listen so go and check it out. And, we had a chat with the guys to find out more about the band, so read on below while you listen…

GR: Who are Second to Safety?

GR: What’s your backstory? How did you guys get together?

Sean: “That’s kind of a long story at this point, but I started this band in 2016 with a few friends from back home. It’s evolved a lot from there, we’ve gone through a lot of member changes, the current lineup mostly met in college.”

Zack: “I used to front a different band, Primer & Grayscale, and I played a lot of shows with the previous iteration of Second to Safety. I was friends with Sean and Josiah in college and I joined shortly after Primer broke up.”

Josiah: “I wanted to be in band, never was, but I was friends with Sean and Zack and the cards just kinda fell into place for me to join.”

GR: You’re releasing Draw the Blinds this month. What should people be expecting from this song? What inspired you to write it?

Sean: “Draw the Blinds is about my frustration with the political inaction of others and myself. It’s about feeling like nothing is getting better, so you turn around and blame people who don’t seem to care.”

Zack: “Yeah it’s very much a call-out song, but not just at some imaginary person. We tried to write it in a way that in some sense we’re not exempt, so it’s angry, but also kind of ashamed in a roundabout way. The album, Esther, is very much a concept record where the character begins very angry at the world and disillusioned, then falls into a crisis and has to learn to how care and be a person again. Draw the Blinds is the second song, so definitely in that angry, disillusioned part.”

GR: How would you describe your sound to people who haven’t heard it yet?

Sean: “Manchester Orchestra meets Into it. Over it.”

Zack: “We honestly suck at this question, none of us ever know what to say! I just say we sound like if Radiohead grew up in the 2010s emo scene instead of the 90s alt scene. Which sounds pretentious and isn’t even that accurate, I just don’t have anything better.”

Josiah: “Cinematic post-hardcore that grew up in a literal post-industrial town.”

Sean: “A lot of what I write is framed as or inspired by conversations; either the significance of that conversation or its subject, which can range from personal experiences to politics to philosophy or whatever.”

Zack: “I was really inspired by philosophy, especially a lot of the existentialist and continental stuff. I don’t read as much anymore, it’s kind of hard to when you work and play music and still want to have meaningful relationships with your partner, friends, and family. I also write a lot about growing up in Pittsburgh, especially about post-industrialism, how the towns kind of fell apart after the steel mills left shortly after I was born and a lot of them never fully recovered. I beat that particular topic to death, haha.”

Josiah: “I write to basically fabricate a lens through which myself and others can view the world and to inspire self-evaluation and critical thinking. I want music to be a catalyst that creates conversation and community… and I just like music. I write a lot about girls too…”

Sean: “Sorry that sounds really pretentious, but we’re actually just BIG nerds and so are all of our friends.”

GR: Which bands/musicians are your strongest musical influences?

Sean: “Both Jeff Tweedy and Nels Cline of Wilco for their respective specialties. A lot of the riffier stuff in the emo revival like PUP, Slow Mass, and Rozwell Kid. But honestly I kind of wrote like this before I got into a lot these bands, they’re just bands that I heard and, like, got it, they helped more explain to me what it is I like about music.”

Zack: 2I grew up on the big cinematic late 00’s post-hardcore stuff like Thrice, mewithoutyou, Manchester Orchestra, and Brand New. I think that comes across in my writing a lot. Lyrically though I’m actually really into alt-country, especially Jason Isbell. I personally think he’s the most talented lyricist not named Kendrick Lamar of the last decade and I learned a lot about how to write compelling songs from storytelling lyricists like him.”

Josiah: “I don’t really play like most the bands I listen to. I really like Microwave, Mansions, All Get Out, but I actually play a lot of Gospel ironically, maybe played like a punk but not really punk? I draw from individual sounds I like or a genre as a whole, I’m hyper-specific or really vague with no middle ground. I probably draw more inspiration for my tone from bands I like than the actual notes I’m playing.”

Zack: “Our sophomore LP Esther is out February 28, 2020. We’ll be playing around Pittsburgh a lot and doing some weekenders. We are also in talks with another band we can’t mention yet for a longer tour this summer, so if you like what you here we might be coming to your town.”

GR: Anything else you want people to know about you?

Sean: “Bernie wielding a guillotine 2020. Ska defines who I am as a person, I will never turn my back on ska.”

Zack: “Yeah, like apparently every band we’re big Bernie fans here. Get out there and vote, but also do little things for those around you because it’s about more than whose in what political office, as important as that is. Changing the world starts with stuff as simple as being there for your friends when they need it or holding people and yourself accountable for their actions.”

Josiah: “I think music is more powerful than the human language has the ability to express.”