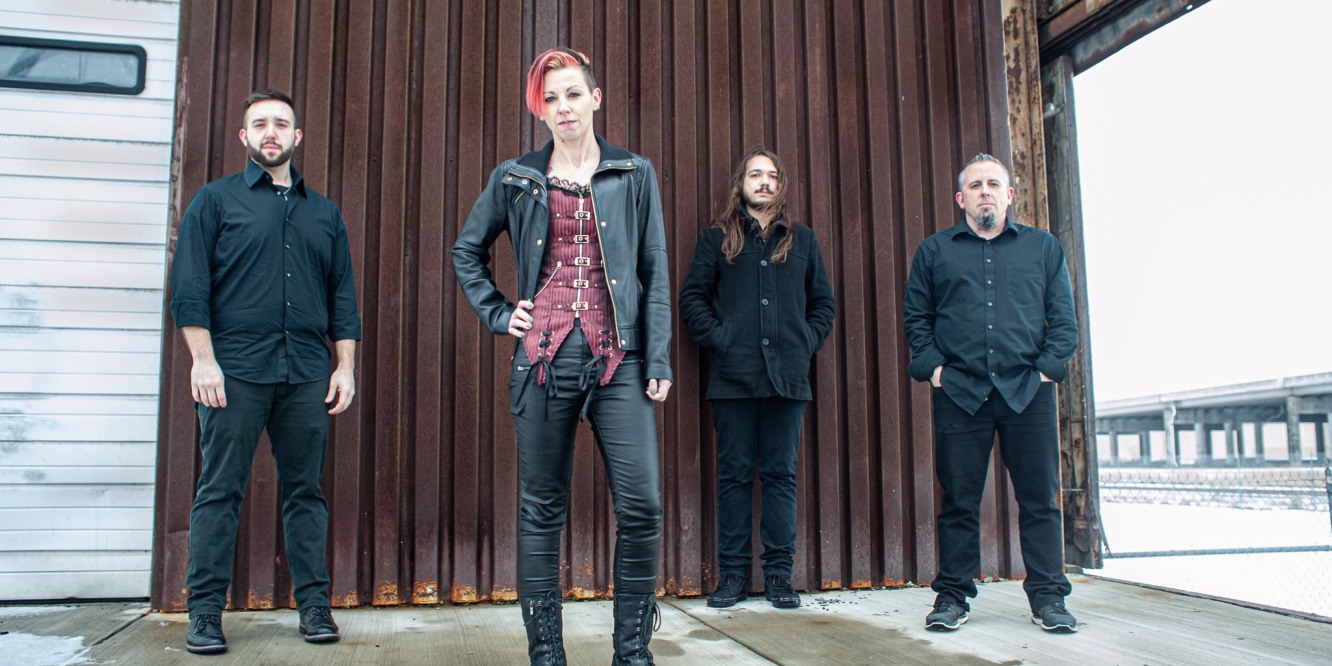 Having played together in cover bands for years, Buffalo, NY’s Hearts & Hand Grenades‘ decision to start making their own music owes much to the Goo Goo Dolls.

The band started out at the beginning of last year, through guitarist Mike Bress and bassist and lead vocalist Stephanie Wlosinski, who had been playing in local cover bands for seven years.

As Mike explains: “We were playing a local charity telethon gig and happened to be placed right before the Goo Goo Dolls played their songs for the charity. Robby Takac from the Goo Goo Dolls happened to be in the room and listened in. He had approached us after the gig and asked that we get into his studio to record our music and the rest is history.”

And they’ve already released two EPs in that time. The latest, Nothing Left, was released in December and offers up four high voltage hard rock tracks that give us the perfect introduction to the band.

It kicks off with the EP’s title track, which starts out with chugging palm-muted guitars then drums and high-pitched guitars slowly enter the fray. Stephanie’s deliciously edgy vocals take over and dominate the opening verse then drop into a big singalong chorus. A funky little guitar solo jumps in and feeds into a second verse, which builds to another chorus that’s followed by a bigger guitar solo. Check it out in the video below:

Then the excellent The In Crowd showcases the true rock intensity of the band. It starts off with a light guitar lick that continues under Stephanie’s light vocals “There’s a secret place, called the Twisted Face, And it’s full of liars, cheaters, thugs and fools, In the fancy club, You would never know, That the people here are murderers and ghouls.” It suddenly explodes into a barrage of fast-paced vocals and heavy guitars and drums, then drops back into another light verse.

A huge guitar solo takes over following a second lively chorus, then drops into another relaxing verse before another big chorus and a little guitar blitz takes us to a heavy ending. Give it a listen below:

There’s plenty more where that came from too, with the feisty My Sickness, and the EP rounds out with the more laid-back concluding track I Hide. And debut EP includes the excellent, catchy Secret, which you can listen to below.

The band’s musical influences rest strongly on the hard and metal bands of the 80s and 90s, including the likes of Metallica, Judas Priest, AC/DC, Korn, and System of a Down.

And their writing inspiration doesn’t step too far from that. As Mike tells us: “We are influenced by anything that you can get some good old fashion head banging in on. We’ve always loved that hard rock feel and there is nothing better then seeing your fans banging their heads to your music. Most of the lyrical content in the music revolves around things that might be unpleasant to think about. For example, The In Crowd is about a hit man and Secret is about exposing someone’s secret that they would prefer to keep hidden.”

2020 looks set to be a big, and busy, year for Hearts & Hand Grenades. They were in the studio recording their third EP, Adrenaline, last month, which is tentatively scheduled for release on 1 May. And they’ll be celebrating that with a release party in Buffalo on 6 May. They’ll then be back writing straight away and hope to have an album done by the end of the year.