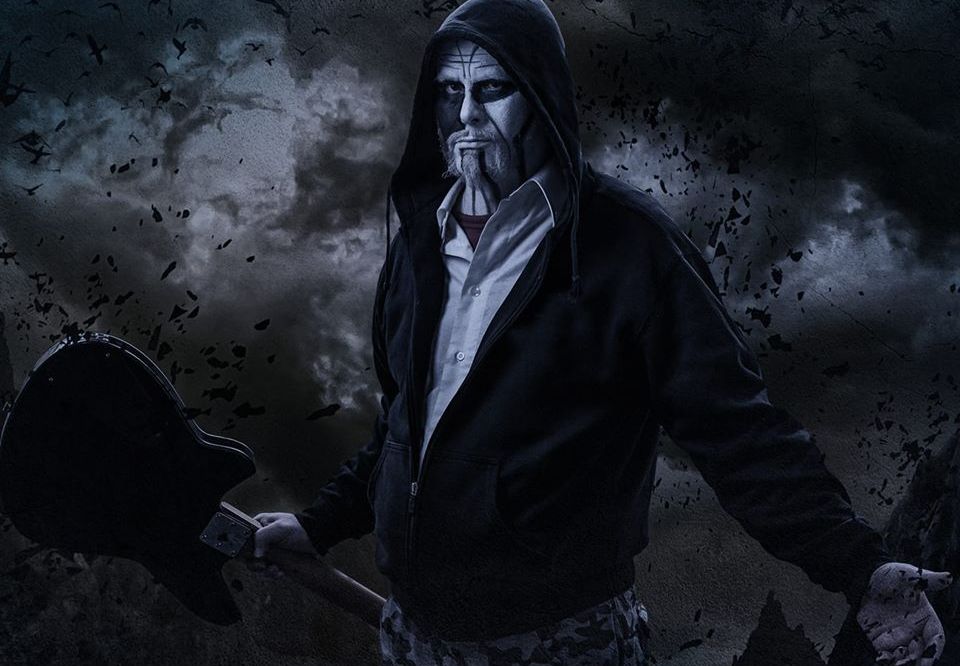 We love a good one man band and we love Finnish metal. So by combining those two things in Finnish doom meets dark metal solo artist Infirmum, we think we’ve found something pretty special.

Infirmum is the work of Timo Solonen, from Jyväskylä in Central Finland, who hadn’t been active in the music since the 1990s but made his return with a solo EP in 2018. He’s followed that up with the release of debut Infirmum album Walls of Sorrow in February.

From it, he sent us Autumn Breeze, which gives us a delicious taster for what his music is all about – big riffs, doomy goodness, and everything we love about Finnish metal. It opens up with a lone low-tuned guitar riff, which is soon by big pounding drum hits then a meandering higher-pitched guitar lick.

The opening riff continues as Timo’s sinister growled vocals come in and the lick soon joins in too. There’s something almost comforting about the almost whispered vocals over the repeating booming guitars alongside the light, cathartic guitar lick.

A slow guitar solo comes in, then continues as the percussion picks up pace with big drum rolls under heavier guitars to bring the track to a heavier ending. Check it out below:

The album’s opening track To Darkness gives us a taste of the heavier and faster side of the Infirmum that the ending of Autumn Breeze hints at. It opens up with repeating, building layered guitars then big drums join in to create an atmospheric intro.

This continues under Timo’s growled vocals in a fast-paced opening verse, which drops into a more doomy chorus with slower guitars over throaty screams. The opening fast guitars return as the verse picks the pace up again.

While things get even more dark and doomy on second track Cause of Sorrow. It opens up with a big thick riff that’s joined by a high-pitched sound, then stabbing palm-muted guitars come in to build a menacing atmosphere. A cool low-tuned riff comes in alongside doomy cymbals and is joined by Timo’s echoey vocals. Give it a listen below:

The album is filled with intriguing dark metal goodness, which is exactly what we love about Finnish metal. For more of it, check out Shadows of the Past in the lyric video below:

We had a chat with Timo to find out more about him and his music, and the state of Finnish rock and metal generally.

TS: “At the moment I am the only member of Infirmum but the search is on so to speak. Infirmum is from Jyväskylä, in Central Finland.

“Last time I was active in the 90’s so there was quite a long break! In 2018, I released one EP under the name of Kuolonkoura and it was kind of a test of if I could compose songs anymore. It was recorded at home and luckily Samu Oittinen at Fantom Studio had time to mix and master it.

“After the EP was released, Samu and I thought I should record an album at the studio. I decided to hire two professionals to play drums (Julius Lehtonen) and bass (Johannes Tolonen) so album could grow more. Also two of my friends did backing vocals.

“There is a chance Infirmum can perform live. I have been discussing about it with some people now for a few days. The light is green but nothing is certain yet so I can’t say more about it.”

GR: You just released Autumn Breeze. What should people be expecting from the song?

TS: “The song is heavy and dark and a journey through the thoughts of an old and bitter man’s life. Crushing riffs with sad melodies. Debut album Walls of Sorrow was released 28th of February and I hope Autumn Breeze will help people to find the album and the band.”

GR: What inspired you to write Autumn Breeze?

TS: “I wanted to compose something quite heavy because my mood was already set for something like that. So the basic structure was quite soon ready. For certain reasons I wanted to write lyrics about life and dreams. What is the most common thing elderly people regret about their life.”

GR: We’ve not spoken to any Finnish metal bands in a while. What are your thoughts on the current Finnish rock/metal scene?

TS: “It is excellent I must say. There are lots of great metal bands here so it is quite hard to be noticed. You have to know people. If you are an outsider of the scene it is quite hard.”

TS: “The music is heavy and quite dark Finnish Doom/Death metal. The atmosphere is dark and I could say the whole album is a journey. Good riffs and nice leads to bring the songs alive.”

TS: “Life and its dark sides. I have to write otherwise I just get bored and angry. It is something built inside so I grab the guitar daily to record something. I write about things from the past including global events. If I’m lucky people can find it comforting to listen Infirmum.”

TS: “Black Sabbath and Metallica. If you ask tomorrow I may answer differently because it is so hard to name just a few. Of course Iron Maiden, WASP and so on because those were in the 80’s something raw and heavy. Later Carcass and Bathory.”

TS: “I would like to go into the studio this year if it is possible. Also after Corona I try to get Infirmum to perform live somewhere. Also, a record deal would be important because it is quite expensive to make an album and pay for everything yourself. It would also be much easier to get gigs.”

TS: “Infirmum is about great and heavy sound through life. Dark atmosphere filled with riffs and leads with pain and sorrow. But there is still hope somewhere, or is there?”