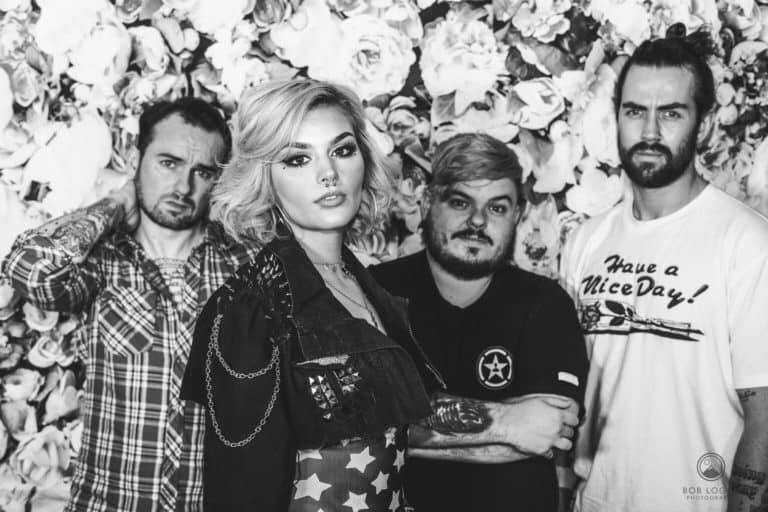 We think we’re onto something special with new Belfast band Paper Tigers. The Northern Irish rockers have honed a thrilling alternative rock sound led by powerful vocals and delicious riffs that’s laced with punk rock energy, and which they describe as “Bitchin’ alt rock.”

The band began with guitarist Michael Smyth armed with a handful of songs and a desire to do something a little different. Indeed, he told us the roots of the band came from a rather unusual place. “So this all really started when I decided to change my guitar set up, and I went from having an Orange half stack and Les Paul to a Fender DeVille and a Mustang,” he told us.

“Up until then, all the bands I had played were really heavy, fast or noisy but I had gotten really into pop music like Taylor Swift, Lorde and Lana Del Rey and at the time I was listening to the Pale Waves record a lot.

“I had really started to pay attention to the songwriting, hooks and melody instead of just riff after riff. So I remember I was messing with my new amp just looking for sounds and started playing the riff for what would be our first single Gucci Smiles and then it went from there. I had a really clear idea of what I wanted the band to be, how I wanted it sound and the aesthetic for the band and I went about trying to find people to be a part of it.”

From there, Michael began building out the band despite suffering what he describes as “Spinal Tap syndrome” with bass players. Mickey Teague came in on drums in January 2019, then introduced Stevey Henry to finally stopped the revolving door on bass. Next step was to find a vocalist and that arrived in Hayley Norton.

As Michael explains: “In a moment of rock and roll fate, I was scrolling
through Facebook and came across a video of Hayley singing Led
Zeppelin on Ireland’s got Talent and was blown away. So, and I’m not
gonna lie here, I totally internet stalked her.

I found her Facebook and couldn’t believe my luck when she lived in Belfast. So I messaged her and convinced her I wasn’t some creepy axe murder serial killer and we met up and it went from there. This is the line up of the band that has really allowed things to take off. So much of being in a band is chemistry and we all just click.”

The band have since set about honing a sound that everyone seems to have a different take on. As Michael explains: “It’s really strange because after shows we get a lot of people coming up to us and they have their opinion about the band and our sound, which is great and we love chatting to people, but everyone seems to have a different take on it. Some people think we’re hard rock, some people think we’re classic rock or power pop rock or pop rock or indie, maybe we’re all those things?

For me, I would say that we’re a melodic indie rock band with big hooks and big choruses with a punk rock heart beat. I dont know if that answer would make anyone want to listen or just confuse them! To me musically, the songs are punk rock songs but what that means to me and what that means to someone else could be say At The Drive-In to Discharge.

“It’s really when Hayley adds her vocals that the songs take on a completely different form and the songs get elevated to this whole new place. It’s always incredible in practice to hear it go from one thing to another.”

The latest taste of this is second single Flames, which was released at the end of last month. It opens up with a cool fast-paced guitar riff over rolling drums that continue under Hayley’s edgy opening vocals. Faster, lower guitars kick in and feed into more powerful vocals, then cool “ooo-ooo” vocals.

Another fast-paced verse takes over and feeds into a big powerful chorus. That drops into a cool high-pitched guitar riff over a thick bassline, then drops into a final chorus.

On the track, Michael told us: “It’s had such a great response so far, which is amazing! People should expect a track dripping in snarling punk rock attitude with soaring melodies and driven by a face melting riff that gives way to a stadium sized chorus with more hooks than a pirate convention!

It’s got a lot of energy. It was one of the first tracks I wrote for the band and it was the first song Hayley wrote lyrics for after joining the band, so its great to have her put her stamp on it. I think it’s one of the tracks that really nods to a sound that encapsulates the band. It’s already a live favourite with crowds.” Check it out below:

Debut track Gucci Smiles ramps the heaviness up a level or two, again opening up with a fast-paced riff and rolling drums. That feeds into Hayley’s deliciously edgy vocals “Closed cups of sweet relief and dancing with bare feet, I’m burning, you’re burning.” The verse ends on the line “Met at the crossroads and I sold,” which concludes with big high-pitched vocals “my soul to get what I want in the end.”

That drops into heavy chords that lead us into a big singalong chorus “Dollar bills, Gucci Smiles, Sapphire suns in bullet skies, The rain.”

A spinning riff gives way to another verse, which again feeds into the catchy chorus led by Hayley’s awesome vocals. A mass of heavy guitars under big cries bring the track to a heavy ending. We are absolutely loving the energy and catchiness of this track, so check it out below:

The band’s key influences include Pretty Girls Make Graves, on whom Michael says: “I adore that band, the way their two guitarists intertwine and play off each other is amazing.” And other influences include the likes of Yeah Yeah Yeahs, Marmozets, Pale Wolves, Royal Blood, At The Drive-In, Nothing But Thieves and Wolf Alice.

And when it comes to writing music, Michael explains: “Honestly I just have to do this, I’ve been in bands since I was 14 and I’m 35 now, there are few left doing this at my age. All the casual people just fall off and stop, so it’s just a drive inside me to do it. I love it and its been the only constant in my life during that period of time.

“In terms of what makes me pick up a guitar and write, I just want to keep getting better. I love that feeling of chasing a song, maybe you hit on a nice chord progression or a cool riff and then the hunt is on! Working through it and getting the parts and picking through things to make this thing that comes out of nothing. Not to sound hokey, but there’s a kind of magic in that.”

And when it comes to lyrics, he adds: “Both myself and Hayley write lyrics and it’s really interesting because we have such different styles. Hayley’s style is so direct and up front.

“We had a session up at the practice room just the two of us working through putting the finishing touches on some songs and finishing some lyrics and I remember being shocked at how brutally honest she can be. She doesn’t try and dress it up in language or metaphor. Whereas I have a tendancy to dress it up in language and metaphor and try and paint an image, there’s a message in there it just takes some deciphering where as Hayley’s songs it’s all laid out for you.”

Thematically, the band’s music can be summarised by the Hunter S Thompson quote: “Hope rises and dreams flicker and die. Love plans for tomorrow and loneliness thinks of yesterday. Life is beautiful and living is pain.” Michael explains: “I feel that’s a pretty good explanation of what we cover. Everyone has issues and the band can act as an outlet to exorcise those demons. P

laying live and getting to articulate some difficult things into words and feeling and motion can be incredibly cathartic. It’s really interesting when songs start to hold a different meaning as they get older and maybe you move away from the initial event.”

The band had shows and a video planned before Coronavirus hit but are hopeful all of that will go ahead once the mess is behind us. They also have a third song to be released from the same recording session as their first two singles, on which Michael tells us to expect “a very different
kind of track, it’s very dark.” And, they hope to do more recording in the summer, so there’s plenty more to come from this exciting new band.

And Michael adds: “We’d just like to thank everyone for their support and interest in what we’re doing. Without people caring it becomes very difficult to keep going so thanks to everyone who shares a post, streams a song, buys merch, writes an article, takes photos or tells a friend about
the band. You’re all heroes in our book!”