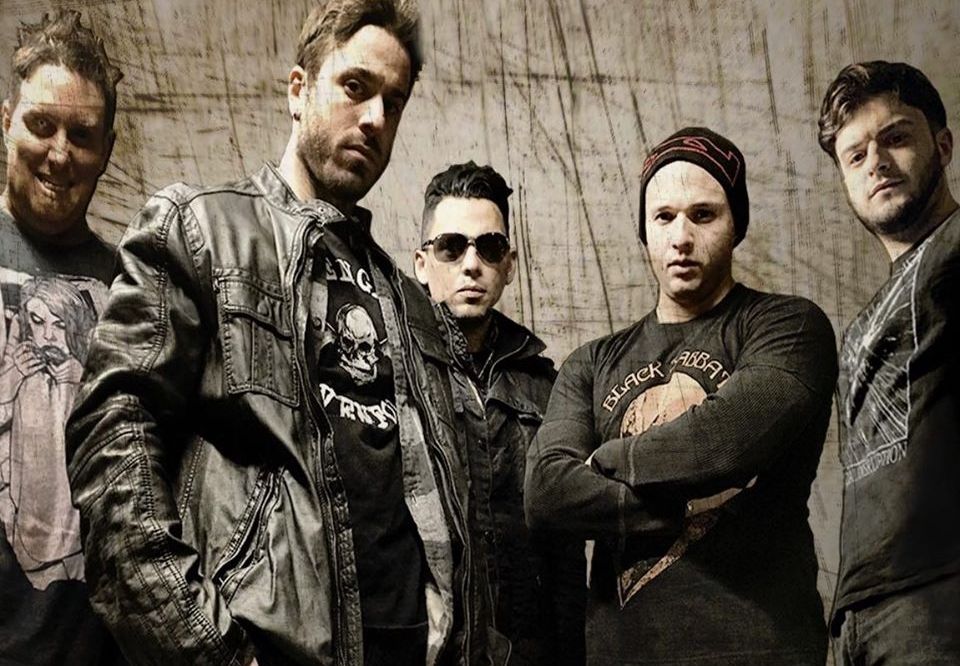 New Jersey band Harvest Falls refuse to be held back by a set sound or genre labels and intriguingly describe themselves as being inspired by passion, nostalgia and the unpredictable.

The five-piece – who, if we were to take a stab at a genre, fuse hard rock with melodic metal – began when a former band broke up. Its two guitarists kept things going with a new approach focused on the emotion of the music rather than songs aimed at radio play. And we have to say the new approach has worked a treat.

Our latest taste of this is the excellent Brand New Day, which was released at the start of this month. It opens up with drum and a building guitar noise that is soon replaced by a descending guitar lick answered by stabbing bass. That soon gives way to more aggressive chords and heavier drums.

The engaging vocals of Ron Cinnella that open up “Comes crashing down, Just like the pouring rain streaming down against my face, And I can’t fake another smile and say the truth will set you free.” A big drum roll gives way to the heavier guitars, which feed into a huge singalong chorus “Does this matter, If we choose to live this way, Learn to fly away, To a brand new day.”

Another blast of guitars drops into a more laid-back verse, in which the instrumentals linger then explode into life ahead of a second chorus. Check it out below, and we defy you to not instantly be singing along to this absolute banger. (Warning: Video contains flashing lights, so discretion advised for people with photosensitive epilepsy or similar conditions.)

The band up the heaviness in the delicious Somber Grey, which comes from their 2016 debut EP. It starts off with effects ridden guitars and drums, then a huge smash of heavy guitars over a repeating high-pitched synth sound. It drops into a mellow verse led by Ron’s delicious vocals, then bursts into a pre-chorus of powerful vocals “Burn so deep, And break through the silence we create” then the big vocals “Colors once so vibrant, Slowly fade away, Faith distorted, Life’s become a somber grey.”

A second chorus drops into big low-tuned guitars that continue under a huge scream of “Now it is time to rise” that feeds into a final chorus. That drops into more low-tuned guitars and cymbals under an outro of eerie vocals “What will we do when the time end is near, Will we run away, Time bomb ticking, The emptiness surrounds,” and closes on a big cry of “The ending is near.” Check it out below:

Another more recent track is Moment of Consequence, which is written about the spate of school shootings in the US and from which the band donated to a charity working to help those affected.

It opens up with building drums and bursts into big guitar chords and lively drums, then feeds into Ron’s vocals “I’ve never felt this way before, This sudden feeling rushng through my bones, A silent scream in agony, We missed the signs of warning.” That feeds straight into a big chorus “In the moment on consequence we lose ourselves again, In the madness of tragedy we find ourselves again… In this moment of violence, when will this ever end?”

Check it out in the great video below: (Warning: Video contains flashing lights, so discretion advised for people with photosensitive epilepsy or similar conditions.)

GR: Who are Harvest Falls?

HF: “We are five friends based out of East Rutherford, NJ. Marc Burnuy and Anthony Gomes, the two guitarists, were in another band called Nuclear Harvest that disbanded about 7 years ago and put together Harvest Falls after a couple year hiatus. Ron Cinnella was a friend of theirs from the NJ club scene and was next. stv, the bassist, found Cameron Simione the newest member, from NY and that has been the lineup for the last 6 months!”

GR: You just released Brand New Day. What should people be expecting from the song?

HF: “It’s a soaring type of arena banger with a great chorus about breaking out of a bad relationship. Its like most songs with passion are! I liken it to end of the poem by Emily Dickenson, ‘after great pain, a formal feeling comes, This is the Hour of Lead, Remembered, if outlived, As Freezing persons, recollect the Snow, First – Chill – then Stupor – then the letting go.”

“It’s the letting go part that equates to a death of some sort inside of us. But there can be something better, and that is the Brand New Day we refer to.”

HF: “We always just thought we were a metal band or a high energy hard rock band. There are so many sub-genres of what we call ‘metal’ that I cannot even figure it out anymore, can anyone? Melodic metal? But we don’t do Dragonforce harmonic leads so not really.”

HF: “We use real stories and real experiences to write about. A recent song Moment of Consequence was about the spate of school shootings in America, and we handed over donations to March for Our Lives, a nonprofit organization benefiting those affected. We have some themes that we really want to write about, like animal abuse, and are still kicking around concepts there.”

HF: “We all have really, really different musical backgrounds and likes. Ronnie loves Korn, Marc loves Badflower, Ant likes Eye Empire, stv likes shoegaze and Beartooth, Cam likes super heavy stuff. So it’s a mix, but melody and hooks are king. Once you have that you can write anything.”

HF: “We are working on a full length. We are unsigned so we do videos, recording, etc… ourselves. Looking to grow our fanbase and who knows from here! We just launched a website and a new merch store so that is exciting too. All the merch is designed or inspired by the band, and we do limited edition stuff all the time.”

HF: “We believe every person can relate to our songs, and our feelings are your feelings. We just express ours through heavy music. Thanks for reading!”