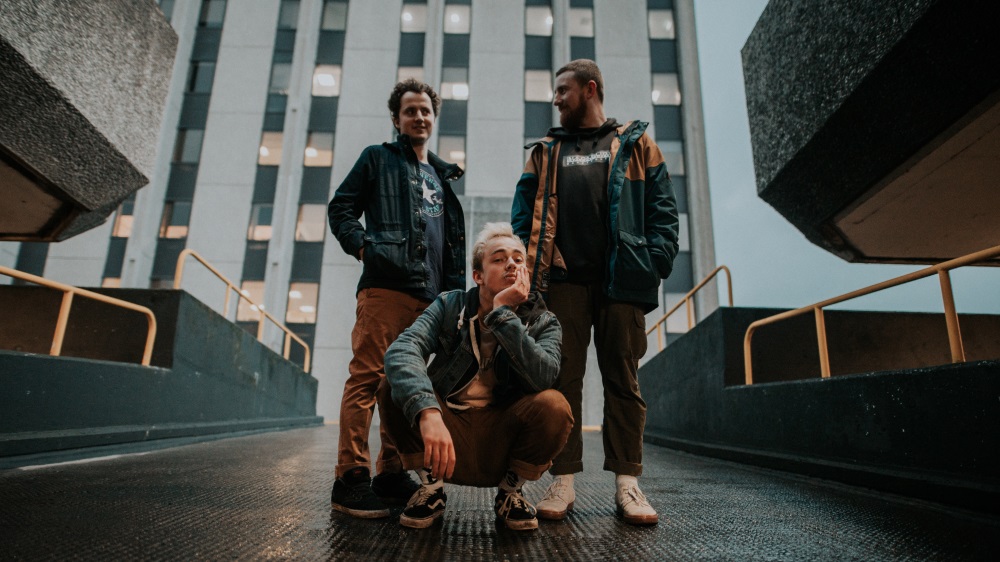 Punk trio Trashed comes from a place that we can very much relate to. The Bristol attribute their punky sound coming from “years of being mesmerised by Kerrang! and Scuzz when bands like Green Day and Sum-41 were owning the show.”

In fact, the Green Day connection is what brought the band together as Jimmy (guitar and vocals), Sam (bass) and Ben (drums) became friends at Reading Festival in 2012 after bumping into each other at a secret Green Day set. After jamming together for a while, in 2017 they decided to drop out of university to start working on the band.

They’ve since set about honing a fun, punky sound that focuses on personal influences such as vegetarianism, dealing with anxiety and desperately trying at all costs to avoid a 9-5 job. We’re very much on board with the latter, in particular, as we are with a sound that they describe as “nostalgically unique punk rock, energetic, and relatable.”

The most recent taste of what the band offer up is latest single Disgusting, which opens up with a couple of drum hits and a lively smash of punky chords. Jimmy’s engaging vocals take over “As soon as I stepped in the room, My eyes dropped straight onto you, But my jaw dropped when he stepped in front of me.” It feeds into a chorus of “But now he’s whispering, Into her ear again, Hope she’s not listening to him, And now I feel so dizzy, Yeah I feel disgusting.”

It’s fast-paced and lively, with Jimmy’s non-stop vocals supported by catchy punk chords and drums. Check it out in the video below:

On the track, Jimmy told us: “It’s had an awesome reception, the fact that after only one year we have such a loyal fanbase who spread the word and get so stoked on what we put out is amazing! Luckily, people at Spotify think we’re alright enough to put Disgusting onto their Skatepark Punks playlist too.

“I wrote Disgusting about this time I was at a house party and there was a girl I really wanted to talk to. So I spent some time drinking to build up some confidence and personality, but while I was necking rum and cokes she was wooed by another dude, so I spent the whole night watching them have fun. Great party!”

The track comes from the band’s EP Faceplant, which is out out now on Soundcloud and YouTube and coming soon to Spotify and other platforms. Also on the EP is its first single Charlie Sheen, which opens up with a lively blast of guitar chords, which feed into the opening vocals “How many blurry days in a row has it been, Well I don’t even know, It’s put more paranoia inside of me, Thank coke in Charlie Sheen.”

A second chorus gives way to a cheeky little solo, which feeds into a final blast of the chorus supported by driving drums that bring it to a heavy ending. Check it out in the video below:

The EP saw the band work with Neil Kennedy, the producer for Milk Teeth, Creeper and Boston Manor. Jimmy told us to expect: “Songs, music, maybe a few lyrics here and there. It’s five tracks of punk rock, one of them about a girl who’d seduced me all the way over to Australia just to mess with me, another about pranging out from smoking too much. It’s just a bunch of messed up personal experiences sugar coated with major chords really.”

There’s also a heavier edge to the band’s punk sound, and we love the sound of tracks like Yet Again and Careless from their debut EP Yours Not Mine.

The band takes influence from the likes of Green Day, Basement, Sum 41, Foo Fighters and Nirvana. While on their musical inspiration, Jimmy tells us: “Lots of things influence me and Sam lyrically. Main topics are romance, heart break, depression, anxiety, drugs and grudges.”

The band had big plans before you-know-what happened, as Jimmy explains: “We had a whole bunch planned over summer, some of our biggest shows so far in fact. But with the world in turmoil those have been paused until next year. We might be writing something longer than an EP though… but that’s a secret.”

We’re loving the sound of this band and looking forward to hearing what their new EP brings us. And, according to Jimmy, we’re not the only ones. “We’ve had a lot of people say to us that our music has helped them through difficulties in their lives, which means so much to us.,” he said.

“We write about things we’ve been through and are going through, so if people are relating to the songs they’re relating to something real! If people need to vent, they can always catch us on Instagram for a chat.”