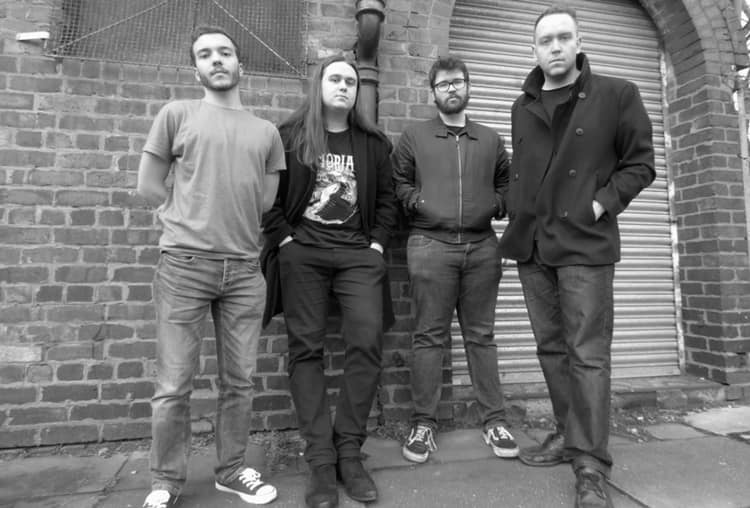 Armed with booming riffs and delicious guitar licks, unrelentingly heavy drums and engaging vocals, Polybius are a great example of the quality of the underground music scene in Liverpool.

The quartet first met at university, which explains the fact that none of them are actually from Liverpool. Vocalist Dylan is from Birmingham via Bristol, lead guitarist Luís is Portuguese, drummer Dom is from Newcastle, and bassist Mike is from Birmingham.

As they explain: “Luís, Mike and our previous drummer Adam started jamming and needed a singer. Dylan, a coursemate of Mike’s, joined after going to a gig in Manchester and kept hinting he wanted to jam with us. Our first gig was in February 2018. Adam left because he had a lot on his plate, so we started looking around. Mike had gone to multiple events with the band society at uni to try and find a new drummer.

“Eventually, at a gig with two of his friends, the subject was brought up. They mentioned their housemate Dom was a fantastic drummer, but said Mike couldn’t tell him about needing a drummer because they were going to start a band with him. When the gig ended, they went to a bar and, as if on cue, Dom walked in with his skydiving club (no really, his skydiving club). Two minutes after being introduced, Dom’s housemates drunkenly mentioned the situation to him and the rest, as they say, is history.”

The band released latest single Who Watches the Watchmen? on 8 May, which gives us a great taste of their engaging yet heavy sound. On it, Dylan tells us: “Expect a great song that ticks all the boxes. It’s got everything you want, a great chorus, a massive guitar solo, a heavy riff. All to be enjoyed as loudly as possible.

The track starts slowly, with a lone melancholic guitar lick that’s soon joined by drums, which continues under Dylan’s engaging vocals that eventually explode into a huge chorus. Big sweeping chords feed into powerful vocals “Who has the power, Yeah we know it, Who do you look to when the lights are falling down, Who has the key in their pocket, Who watches the watchmen?” are supported by a big jumpy riff and driving drums.

It keeps on building, then the second chorus drops into a light guitar that feed into stabby guitars and another big chorus. You think for a moment that it’s finished there, but a little guitar lick comes in, gives way to huge rolling drum and a cool screeching guitar solo. That feeds into a big ending to the track with all manner of effects-ridden guitars and unrelenting drums to bring it to a powerful close. Give it a listen here:

Expanding on what to expect from the Polybius sound, Luís says: “Fast and energetic. We aim to bring as much energy as possible to the people listening to us. I’m a big fan of quiet sections with an almost “watery” feel to them, but also of heavy percussive distorted riffs, so a lot of our music builds on that foundation – it is very clear on this song!”

The band liken their brand of modern rock to classic rock and metal like Black Sabbath and AC/DC to more recent bands like Queens of the Stone Age. Or, as Dylan puts it: “We are both old and new, fresh and familiar, or at least we try to be.”

Dylan tells us he loves bands like Metallica and Soundgarden and artists that tell stories when they sing, such as Ozzy Osbourne and Jack White. Luís is a huge fan of Tool as well as Nirvana, Led Zeppelin, Pearl Jam and more. Dom names Slipknot’s Joey Jordison and the “ultimate showman” Mötley Crüe as his biggest inspiration on drums alongside Pendulum’s KJ Sawka and Muse’s Dom Howard. While Mike cites Foo Fighters as well as bands like Thin Lizzy and The Who’s John Entwistle.

Polybius’ writing process combines what Dom describes as “a mishmash of writing styles” with lyrical influences ranging between very personal songs to the completely abstract.

As Dylan explains: “A lot of our songs are about the world we live in today, with lots of themes such as dystopia, control but always a sense of optimism that things can and should get better.

“Who Watches the Watchmen is of course a famous phrase about the powerful in our society and how we need to keep those people in check ourselves. The song is kind of a rallying cry to not just be aware of this but to reject things that spread hate and fear in all of us.”

And Luís adds: “I don’t usually write lyrics, but when I do they tend to be pseudo-inspirational crap. Writing the music itself usually starts with an idea vaguely inspired by other music I’ve listened to. I’ll take the idea and play around with it and see how I can put my own spin on it, mixing it with other ideas and motifs.

“Usually this translates into a guitar riff, and then I try to find other ideas that would fit with it, or continue playing around with it until other parts start forming in my head. As I’m developing the idea, I usually get a sense of the kind of ‘feel’ that I want the song to have, and I try to come up with parts to accomplish that feel. This eventually leads to a full song that feels very cohesive and with a sense of direction. This whole creative process is very enriching to me – and, to be very cliché, allows me to express myself.”

And you can rest assured there’s plenty more to come from Polybius despite everything that’s going on at the moment. They plan to be back gigging relentlessly, including a heading gig at EBGBS in Liverpool on 4 September and their first gig outside of their base city by playing at the Actress and the Bishop in Birmingham on 20 November. And they plan to be back in the studio to record some of their “crowd favourites” Freefalling and Back To The Moon.

As Dylan tells us: “Watch this space, when we get through the current situation (and we will) we are going to be gigging and playing music more than ever before. I personally have really missed gigging and we are only one month in, so I can’t wait to be playing again in front of a huge crowd having a great time.

And on what to expect when that happens, Dom adds: “Our mosh pits are fucking crazy, it’s difficult to concentrate on playing the music whilst trying to watch the crowd! Get down to our next gig and you’ll see what I mean.”

At first sight, we’re guessing you presumed the band was named after something Greek or, indeed, the Greek historian. But in fact, as Mike points out to us, they are named after an urban legend. As he explains: “If you don’t know the urban legend it’s about this arcade game (or so we’re led to believe) from Portland that led those who played it to have psychoactive responses.

“Men in black were said to often use the machines, for data mining the machines and analysing the results, and who played them the most. They are also said to have mysteriously vanished…”