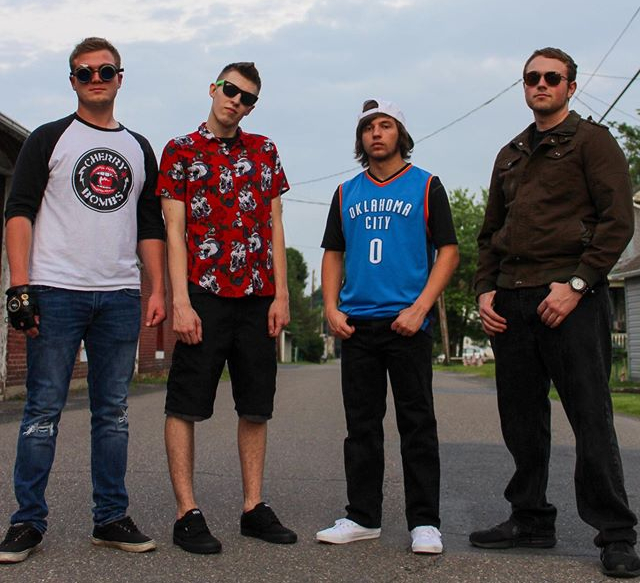 A high school marching band is probably an unlikely foundation for a group of lads playing hard-hitting thrash. But that’s the case with Pennsylvania quartet UltraViolent – which is one of the best band names we’ve come across while writing this blog.

The young Pine Grove band fuse classic thrash with the groove of modern metal – from the sound of which, you already know that we’re onto something good.

The band sent us Insult To Injury, which opens up (after a piano and electronic noise intro track) last year’s debut album Eviction, which you can find out more about in the interview below.

Insult To Injury opens up with a cool darting riff that drops into a big chugging riff over lively drums then a huge scream ushers in double power riffing. Spoken vocals come in over a lighter guitar lick and a chugging palm-muted guitars then dives into a huge chorus supported by big thrashy guitar chords.

The big opening riff returns and links into a second verse featuring a booming, bubbling bassline, before savage vocals come in and lead into another big chorus. That gives way to rolling guitar riff and big pounding drums then drops into palm-muted guitars under spoken vocals. That’s before booming riffs and huge drums lead us to a heavy ending with a reprieve of the opening riff. Check it out in the video below:

The album is packed with fast-paced, thrashy goodness including Hay in the Needlestack, which opens with a building guitar riff and drums then a huge scream drops into an intense opening verse.

While another personal favourite is the lively, although slightly less heavy Agenda, which features engaging spoken vocals over chugging guitars then feeds into clean vocals through the chorus. The second chorus ends on a huge scream that gives way to lively guitar riffs, then a cool descending guitar lick is answered by high-pitched notes. Those feed into a final chorus, then chugging guitars bring the track to a close.

Then there’s the intense riffing, unrelenting drums and violent vocals of the huge Cataclysm. Give this monster of a track a listen below:

GR: Who are Ultraviolent?

UV: “UltraViolent is a four piece metal band from Pine Grove, PA. UV was formed in 2014 after the four of us developed a chemistry playing together in the high school marching band.”

GR: You just released Insult To Injury. What should people be expecting from the song?

UV: “Our sound revolves around old school thrash mixed together with modern groove.”

UV: “Most of our lyrics up to this point have been war based or political, however we do not take a side when referring to political lyrics. We tend to point out flaws on either ends of the spectrum.”

UV: “We are looking to drop a single sometime around summer, which will be followed up by another full length album sometime in the future.”