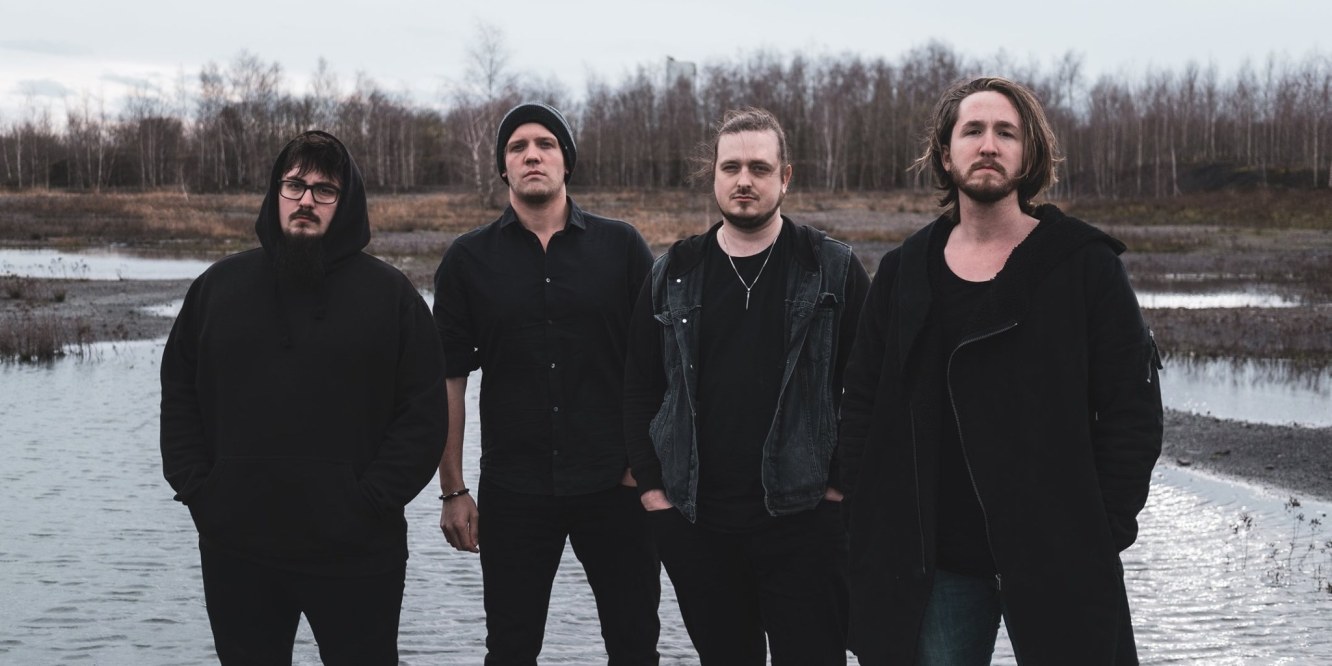 Exciting new German band Blossom Cult are on a mission to provide a safe retreat for those who feel trapped in the torn society we find ourselves inhabiting. They’ve honed an intriguing sound that’s rooted in metalcore with elements of progressive rock and more.

The band is led by János Krusenbaum and Max Krüger, who were formerly in prog rock band Seeking Raven for several years. They’ve branched out with a band that instantly sounds heavier and more dramatic if the sound of debut single Atlas is anything to go by.

It opens up with symphonic, dramatic style with heavy guitar chords supported by flurries of violins. That drops into big screams answered by clean vocals “Come hold me higher, Burn in my fire, Make me your traveling companion, The prophet of ending, I’m the world on your shoulders, A world growing colder, Don’t you close your eyes.” The roles are reversed as it continues “Come hold me closer, Your darkness composer, Curse all you want, We’ll always stay bond, No rest for the weak, No sleep or peace, I won’t let you slow down.”

A little section of stabbing guitars and more laid-back vocals. More mellow high-pitched vocals take over then feed into the return of the opening call and answer vocals. A delicious little guitar solo takes over with light instrumentals support in a nice laid-back section.

That calm is broken up by repeated cries of “Atlas” that are answered by clean vocals “And the travelling companion, And the prophet of ending, And the world on his shoulders (Let him close his eyes), And his darkness composer, And his king of waking, And his master and ruler, Please let him close his eyes.”

And that late burst of heaviness brings this awesome debut track to a close, leaving us keen for more from this intriguing new band. But for now, you can check out Atlas in the video below, which features Nele Messerschmidt from German symphonic metal band Elvellon playing the character of Atlas:

We had a chat with János and Max to find out more about the new band. Read on below…

GR: Who are Blossom Cult?

JK: “We’re playing very diverse, emotional music with elaborate lyrics commenting on society from a position neither left or right. The band is mainly me on vocals, guitars and keys and Max on guitars and backing vocals – that’s why we’re giving interviews together, this time I’m starting out.

“So, we led the Prog Rock outlet Seeking Raven for seven years and now decided to open a new chapter by starting over. We’re working together with Alex Dachwitz (bass) and Christoph Jordan (drums) who help us out to perform the songs.”

GR: You just released Atlas. What should people be expecting from the song?

JK: “It’s an angry, touching song that fits perfectly into these strange times we’re experiencing right now. The lyrics deal with falling desperate watching the world’s craziness and at the same time you’re just not able to look away. I’m sure that many can relate to this feeling in this current year of global crisis.”

JK: “Our music is something real, we’re not here to lie or pretend – we speak from the heart and tell what we want the way we want.
If you like it that’s great and we embrace everyone who joins us on the journey. If you don’t like it, too bad, I guess – we won’t dilute what we do in order to please everyone.

“It’s important that there’s still music out there which is truly free and refuses to compromise for any scene or market, you know?
I guess people will put us in the Prog Metal drawer but it’s actually really hard to pin the sum of the stuff we’re producing right now down to one single genre. At least it’s not if you take the time to actually check out a number of songs and don’t judge us by one first impression.

“Right now, Atlas is our first available song though – so it will be interesting how people will describe us when there’s more stuff out there!”

JK: “The main influence for our songs is some intense past years of observing where our world is heading. Max and I have made similar conclusions and experiences while we further developed our political and societal beliefs.

“We both feel quite desperate and angry at times and decided to form this new band as a tool for us to cope with it all. We don’t want to be an actual ‘political’ band but right now, a lot of our music and my lyrics try to be an alternative to the usual, politically one-sided bands out there painting the world in black and white.”

MK: “I think Blossom Cult is and will be a band with a vast variety of influences. Thus, it’s pretty hard to pick just a few bands. Most recent influences will surely change from release to release.

“Janos and I share an overlap of taste. So, for the upcoming EP Closure I would pick the following bands for us both: Pain of Salvation, Dream Theater, The Beatles.

“In the last 2 years I personally added Ice Nine Kills to the list for their combination of classic instruments and metal. I’m usually absolutely not a metalcore guy but their approach definitely influenced me. In the band I guess I’m the more metal rooted guy while Janos is leaning more towards the classic rock segment (of course simplified a lot).”

GR: We’ve not met too many German bands recently. What are your thoughts on the current rock/metal scene in Germany?

MK: “Germany has a pretty awesome and huge rock and metal scene compared to other countries. So that’s a great thing for new bands. On the other side, Germany seems to be very stuck in certain genre cliches so Blossom Cult will be kind of a challenge to most of the casual listeners.

“All together we’re aware that there are a lot worse places to start a metal band than Germany. Still the German rock and metal scene is a subculture with its own rules and characteristics, and it can be tough if you’re not willing to stick to certain scene rules.”

MK: “A lot! Due to the corona situation we’re not able to name exact dates yet. But what we can tell you is this: There will be a second single out around June/July with a new music video. After that we will release our first EP Closure in September (including the first 2 singles). We’re also planning our first gigs in and outside of Germany. Still… Corona – so let’s see when we can really announce the first shows.

“Next to all that stuff we’re already writing new songs.I don’t want to say too much as we’re still at the start of writing. But we’re working on a huge concept and have already finished a few demos. I have to tell you that I’m already extremely thrilled about this new stuff!”

MK: “Well first of all: We’re a new band so give us a shot. We need you people out there to grow and to reach our goals! Blossom Cult was founded to be way more than just a band playing music. The Blossom Cult is striving to be a home for people feeling lost in a torn society.

“I think there’s a lot of weird stuff going on right now concerning politics and political camps screaming at each other, not seeing the truth that is and will always be somewhere in the middle. So, if you kind of know what we’re talking about feel free to join the cult.”